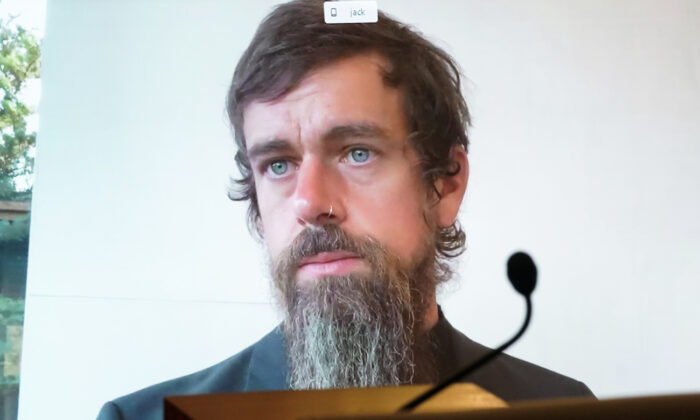 The captains of Big Tech who appeared before a Senate committee a few days ago revealed once again what a pernicious force they are.

Moral narcissists of the highest order, they are all the more dangerous because they think they are good. They are convinced they are helping the world, making sure we in the great unwashed aren’t propagandized by what they deem disinformation or misinformation, when in actuality they are making a frontal assault on free speech via various forms of censorship.

This reached the level of Theater of the Absurd when Twitter’s Jack Dorsey, responding to Sen. Cory Gardner (R-Colo.), testified that Holocaust denial didn’t meet Twitter’s definition of misinformation while, evidently, the New York Post’s reporting on Tony Bobulinski’s widely authenticated emails did.

Dorsey also told Sen. Marsha Blackburn (R-Tenn.) that his site hadn’t censored tweets from the president when it had done so literally dozens of times.

The most flagrant Orwellian prevarication, however, was when Dorsey stated Twitter had no influence on elections. (Why, then, would he bother to censor the Post?)

Google and Facebook are at least as disturbing and arguably vastly more powerful.

In a manner that even the Chinese might envy, “the ends justify the means” has come to America via unseen algorithms dictating what is displayed on our laptops, cellphones, and, soon, just about everything else.

But what do we do about it?

I propose a two-pronged attack, one legislative and one personal/consumer-oriented. The latter, I believe, may ultimately be more effective, but both are necessary.

From the legal standpoint, Sens. Blackburn, Josh Hawley (R-Mo.), and several others, some Democrats, are attempting to overhaul Section 230, which shields sites like Facebook and Twitter from being sued for the content to which they have linked.

Written more than 20 years ago—the early Paleolithic Age in internet terms—the authors of this rule couldn’t have conceived the degree to which these sites have become publishers themselves.

In fact, they are now, in essence, the managing editors of the world’s news and therefore, the gatekeepers of an overwhelming percentage of global information. In a sense, the truth is what they say it is. What could be more powerful than that in a digital age?

We should adamantly support a rewriting of 230, allowing these behemoths to be sued just as much as the rest of us residents of Grub Street. It’s possible this can be accomplished, but, unfortunately, as no doubt some of those legislators would agree, that’s not going to be nearly enough.

A serious look at rewriting antitrust legislation should be in the cards, but without a Trump victory, that’s highly unlikely. And even with one, it will be tremendously difficult, given the deepest pockets in Washington—the deepest pockets anywhere, actually—belong to the tech giants. And since “money is the mother’s milk of politics,” well, you know the rest …

Which leads me, my fellow citizens, to that second prong, to what we can and must do—the consumer approach.

We can leave Google, Twitter, and Facebook, pretty much in that order. If there are enough of us, we can cut their profits and build competition.

For some, maybe many, of us, that means our lives will change radically—or at least we fear it will. But as the saying goes, fortune favors the daring.

Google is the easiest because it has a functioning replacement. I am proud to say I have already left Google (well, in honesty, it took me awhile) for DuckDuckGo. For the most part, I find it just as good, although there are times (like searching for quick sports scores) when I return to Google. (I’m sort of like a smoker who is cutting down.)

Although not perfect, DuckDuckGo is also considerably better regarding the increasingly important privacy concerns. Google, tracking so many things about us for its own gain and who knows who else’s, is in some senses our own Chinese “social credit” system behind a seemingly benign mask. At one point, it was said to be advising the CCP on a restrictive search engine.

Make the switch to DuckDuckGo and feel better about yourself. Also, this will help DuckDuckGo improve and become a true competitor to Google that, rumor has it, was helped at its early stages by an infusion of capital from the CIA and/or NSA.

Leaving Twitter, however, is a more complicated and sometimes more difficult matter, because it functions as something like crack for politicos and journalists. Many of us, myself included, find it difficult to stay off it, afraid that we are missing out on the fray, even though we know it is unfairly arbitrated, to say the least.

A few years ago, 10,000 or so followers of mine suddenly disappeared from my account—was it something I said—but, I’m ashamed to say, I just soldiered on after my emails to the company demanding an explanation went unanswered. About that time, a man I greatly respect, not to mention had many more followers than I, Instapundit Glenn Reynolds, had the courage and integrity to leave the site. Not me.

In fairness to Twitter, there is one thing at which it’s extraordinary. When a cataclysmic event occurs (earthquake, terror attack, and so forth), you can learn a great deal from on-the-ground reports that often are much faster than the media. Whether they are accurate is rarely clear, but they’re certainly interesting and, often, actually more true than media accounts.

Still, by staying on Twitter, you are feeding the monster. The major problem is that the best alternative so far, Parler, is, as of now, not yet what it should be. It is too much like a conservative echo chamber. That it calls upon you to “echo” other people’s entries is an all too clear indication of that. (You get too many inane posts like “Echo that you love Donald Trump Jr.”)

While it’s understandable that we refugees from Twitter (again myself included) get some modicum of relief from this, right-wing versions of Social Justice Warrior “safe spaces” are not what we, or anybody else, need or should want in the long run or even now.

What I would like to see Parler evolve into is what Twitter should have been in the first place—a site where all are welcome with no censorship. It’s good on the censorship but, alas, not so good on the “all” yet. It also needs some digital sprucing up, the old user-friendly thing.

Nevertheless, I’m there and will continue to contribute. Rather than just complain, I’m going to do what I can to help.

Meanwhile, I intend to wean myself off Twitter, beginning Nov. 4, the day after the election. I’d like to think I can go cold turkey, but I suspect it will be more like getting off a drug—first breaking it in half, and then in half again, and so on until I’m gone. In a way, that’s more appropriate.

As for Facebook, alas, I have no immediate answer. There is no clear alternative, at least for now.

Mark Zuckerberg has won via the well-known “first mover advantage.” But we shouldn’t let it stay there.

Remember that other slogan, “If you build it, they will come.”

Roger L. Simon is an award-winning novelist, Oscar-nominated screenwriter, co-founder of PJMedia, and now, a columnist for The Epoch Times. His most recent books are “The GOAT” (fiction) and “I Know Best: How Moral Narcissism Is Destroying Our Republic, If It Hasn’t Already.” Find him on Parler @rogerlsimon. If you want to find him on Twitter, move fast.