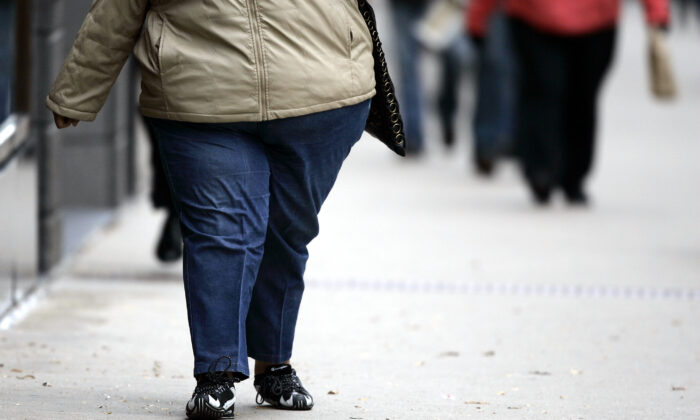 A women walks down the street on Michigan Avenue in Chicago, Ill., on Oct. 19, 2006. (Jeff Haynes/AFP via Getty Images)
Viewpoints

The Truth About COVID That Dares Not Speak Its Name

Michelle Obama was right in principle, if not in execution, when she tried to improve the healthy quality of school lunches.

She was actually saving lives, temporarily at least ignoring that sin of PC sins “fat shaming,” an idea whose principle ramification in the pursuit of not offending people is to kill them.

Too bad Michelle’s initiative didn’t last or was poorly conceived because the truth about COVID-19 that dares not speak its name is obesity is by far the greatest indication of mortality from the pandemic—and, of course, a lot of other things.

If you want to survive the CCP virus, forget whatever vaccine, good, bad or indifferent, or even hydroxychloroquine or ivermectin—first get fit.

When you shed those pounds, and you can often do it in a month, chances are you shed diabetes as well, fight cancer and every other “comorbidity” we have been hearing about for what seems like, and is, years.

Michael Fumento made this situation painfully clear in an article for The American Conservative in which he writes:

“Last month the CDC reported that about 80 percent of those who are hospitalized or die in the U.S. because of COVID-19 are overweight or obese.”

Instead of paying attention to this amazingly high percentage, another epidemic of sorts has been going on in the opposite direction in the name of fighting “fat shaming”—an increasing trend in magazines, online and on television to use overweight women as models.

Often these models are “of color.”

This (naturally) “woke” trend obviously—and very sadly—only contributes to why the death rate is so much higher in minority communities.

As Fumento also notes: “For black women, the obesity rate is a stunning 56.9 percent.”

Stacey Abrams is not a great role model for young black women for more reasons than one.

And, yes, what I just did was “fat shame.” “Fat shaming” saves lives, sorry to say.

Nevertheless, many conservatives whisper to themselves and others “we mustn’t, we mustn’t” when one of us writes something like that, even if obviously true and known for a long time. They’ll accuse us of racism. (Actually, they’re the real racists.)

The reality is we live in a world of maximum politically correct dishonesty that is bringing Western Civilization to its knees. If we don’t start speaking the truth loudly and clearly it’s over.

COVID is just one area of this pervasive dishonesty that has taken over our culture to a degree that may even have shocked Orwell.

“Woke”—the evil spawn of political correctness—is the most successful lie ever to come to America. It is the true pandemic and harder to cure than COVID-19, even the South African strain.

Witness how over 100 business leaders just met in a giant Zoom call to oppose states making voting laws too strict when those laws, even the new Georgia one, are in reality too lax and prey to fraud.

What’s interesting in this is the probability that many of the leaders know they are lying or have convinced themselves (made the calculation) that a lie is the truth in order for their businesses (and themselves) to survive and thrive.

This is something close to what occurs regularly in China.

My friend Victor Davis Hanson has been writing and talking of late of a thirty-seventy split in our country, the thirty being those who are imposing these lies on society while the seventy sit back passively and take it.

He wonders how long this will last. So do I.

About COVID, at least, we can be honest.