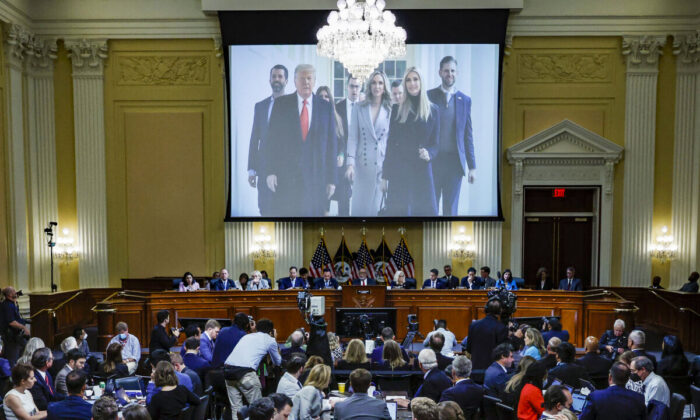 An image of former President Donald Trump and his family is displayed on screen during the third hearing of the January 6 Committee on Capitol Hill in Washington on June 16, 2022. (Drew Angerer/Pool/AFP via Getty Images)
Viewpoints

The Trump-Haters Are Now Desperate

Peggy Noonan and I have recently confirmed that our political disagreements absolutely won’t stand in the way of our long friendship.

This is timely, as in her latest pronouncement upon the ever-shifting and more desperate perspective of civilized Trump-hate (defined here as making some effort at analysis, no matter how nonsensical, and not just primal scream therapy like most Trump-haters) in her column in The Wall Street Journal on June 16, she presented the most delusional version of the Trump-cancellation argument that has yet been made by any otherwise serious person still capable of rational comment on the subject.

The five thin and vibrating tent poles holding up the porous canvas of Trump-denial now, according to Noonan, are: 2020 was a pristine election incapable of serious doubt; Trump was trying to overturn the election result by intimidation on Jan. 6, 2021; there’s no merit in the Trumpism-without-Trump argument—his administration was a complete failure in every policy area; his scores of millions of supporters don’t really support him and they’re deserting him; and all those who turned themselves inside-out—and in some cases violated election and vote-counting statutes—to bring Trump down have no responsibility whatsoever for the almost indescribable catastrophe of the present administration.

The proportions of this failure need not be considered. Both parties will just take lots of emetics, allowing nature to take its course, and move on as if the Trump–Biden years never happened.

No matter how their political vision is marred by the phobia that has turned much of America’s professional political community into jabbering lunatics from whose foreheads cuckoo birds lurch out shrieking anti-Trump epithets at the mention of his name, a diluvian watershed midterm election disaster for the Democrats is now only 4 1/2 months away. As many as 100 victorious Republican candidates will have benefited from Trump’s endorsement.

Trump certainly leads in the polls of Republicans for the 2024 presidential nomination, and is by far the strongest campaigner in either party. He’s the architect of the rejuvenation of the Republican Party by using traditional capitalism funneled into job creation in low-income districts and poaching heavily in traditional Democratic working-class and minority fiefdoms. Trump is also the first presidential candidate since Franklin D. Roosevelt that tens of thousands of people all around the country will stand in the falling snow for hours to see and hear.

Most Republicans believe (with good reason) that the 2020 election was compromised by doubts over millions of unverified, harvested ballots, and vote-counting anomalies in several swing states. They know there were unconstitutional changes of voting procedures supposedly to accommodate COVID-19 problems, and that the judiciary failed to address any of the substantive issues. The courts may have been right to reject Rudolph Giuliani’s poorly prepared pin-pricks, but declined to hear, for process reasons only, any of the 19 lawsuits brought on the constitutional questions that over-clouded the whole process.

The last thing in the world Trump wanted on Jan. 6, 2021, was an onslaught on the Congress; he warned House Speaker Nancy Pelosi (D-Calif.) and D.C. Mayor Muriel Bowser of possible danger to be avoided and offered 20,000 National Guard troops to prevent what happened, and was declined. And he asked his supporters to act peacefully.

The current congressional hearings, which Noonan purports to consider “a powerful indictment, well-documented and undeniable,” are a disgrace. No cross-examination, no Republican presence, no contrary witnesses; all the committee members chosen by Pelosi are among the most rabid Trump-haters. They read their comments from teleprompters—scripted by the television producer hired to present this malignant fairy tale. The anti-Trumpers of all descriptions—from the pathological to the merely self-interested to the sensible minority that merely find him stylistically irksome—know that the Jan. 6 kangaroo court is the last chance to stop Trump, to try to portray him, one more time, as an outlaw.

Attorney General Merrick Garland, ever-vigilant in his self-assigned mission to oversee subversive parents of schoolchildren who don’t want their children brainwashed into loathing America, portentously announced last week that he’s watching the Jan. 6 committee hearings. They will try to indict Trump if they can, despite the failure of prosecutors to find any plausible connection to him—not to win, but to immobilize him through the election.

Once again, they should beware of what they seek: The Republican nominee would then be someone supported by Trump and would resume the enactment of his policies, and any such charges would ultimately disgrace the Democrats very durably.

The post-Reagan bipartisan sequence of inept regimes that Trump assaulted gave us the housing bubble and the greatest economic crisis since the Great Depression; endless, fruitless war in the Middle East, including an immense humanitarian crisis; prostration before the eco-zealots of the world; and the disastrous treaty with Iran that greenlighted the ayatollahs as a nuclear military power after the proverbial decent interval. The Bushes, Obamas, and Clintons are all under siege together, and all have rallied to the final call.

We now know that President Barack Obama knew that Hillary Clinton was allegedly launching a false investigation into Trump’s nonexistent relationship with the Russian government. And we know that former first Bush administration Attorney General William Barr ignored the entire mountain of evidence that made the 2020 election results suspect, shut his department down on the election, and shares the responsibility for the inexcusable delays and soft treatment of the FBI by the special counsel he appointed to investigate the 2016 election, John Durham.

In the end, Barr reminds us of the inadequacy of the Bushes, who allowed the crank Ross Perot to split the Republicans and bring in the Clintons, and returned with poor George W., the locker room towel-snapper who mired the country in recession and Middle East war. The Bushes even had an indifferent hired historian, Jon Meacham, a failed magazine editor. They are passionate opponents of Trump now, and want to roll the Republican Party back to the country clubs; to be good losers.

Americans remember that Trump was, in fact, a very successful president, despite unprecedented partisan harassment, much of it illegal. Trump reversed the post-Reagan decline in per capita income growth, and specifically made the United States the first serious jurisdiction where the lower 20 percent of income-earners were gaining income in percentage terms more swiftly than the top 10 percent. He ended unemployment and oil imports, and practically ended illegal immigration (Noonan blames Trump for its revival), ended North Korean missile overflights against Japan, squeezed Iran so hard that its ability to finance terrorism withered, and the Middle East peace process advanced very substantially.

American economic growth effectively prevented the further narrowing of the gap between the U.S. economy and China’s. Trump withdrew from the policy of allowing unsubstantiated ecological fears to generate massive unemployment within the United States to the benefit of cheap labor competitors, and he got the NATO allies starting to pay appreciably for their own defense for the first time in decades. He left a roaring, noninflationary economy, and a relatively untroubled international horizon.

Barring terrible tactical errors, of which he’s capable, Trump will be back, and will return much wiser and more formidable than we remember him.