The Transcendent Hypocrisy of the Pelosis 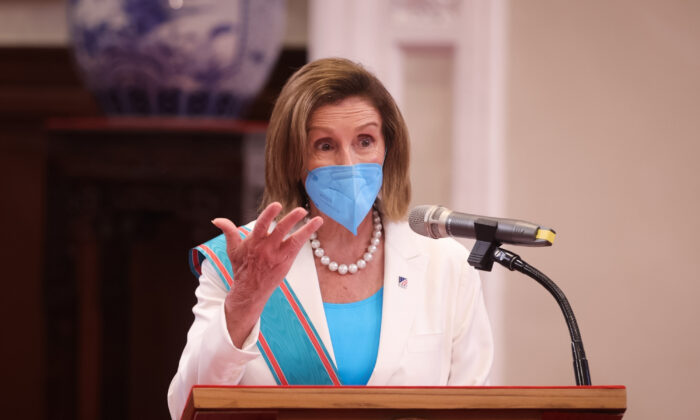 Ever wonder why the Chinese Communist regime huffed and puffed, exploded some cannons, and sent a couple of dozen jets revolving around Taiwan during and after U.S. House Speaker Nancy Pelosi’s visit to the island they’ve long claimed as their own, but in reality, did little more than institute a few small trade sanctions that might have barely made the back pages of the Financial Times?

The Chinese Communist Party (CCP) may be evil, but they’re not dumb. They know where their bread is buttered, and they know a propaganda show when they see one. In fact, they’re experts at it.

For the answer, look no further than Nancy’s husband Paul Pelosi, who got into a bit of trouble just a week or two before, after driving his black 2021 Porsche 911 into another man’s Jeep in the late evening. Both cars were totaled, but both drivers, we’ve been told, are okay. Unfortunately, Paul was allegedly determined to be legally drunk—0.08 percent alcohol from a test delayed a full 2 1/2 hours after he was apprehended, the first sign of the favoritism our so-called elites normally get. Despite pronouncements to the contrary from the Napa Valley police, no doubt everything possible is being done to keep him from getting the strong DUI punishment most of us would certainly receive.

But that’s pro forma. What’s more interesting here is the car he was driving—a 911 that goes for more than $200k when fully loaded.

Shouldn’t Paul Pelosi, of all people, have been driving electric? This is especially true since it was just announced by Porsche that their classic 911 wouldn’t be going electric until at least 2030. That’s pretty far off, far enough for a lot to change. (Maybe Porsche knows something we don’t—that the electric car fad has peaked—and they’re hedging their bets.)

It’s not a great look—bad optics, as they say—since all his wife talks about in Congress is green, green, green.

But that’s just talk, as everyone paying the slightest attention knows. It’s for the little people—you know, the idiots who had to wear masks at their hairdressers or keep them on at exclusive Napa Valley fundraisers. Who of the “bon type bon genre,” as the French say, does that?

What does this have to do with a trip to Taiwan? A recent article in Business Insider details the substantial investments that Paul Pelosi made just for 2021 and 2022. They include Apple, Microsoft, Alphabet, Micron, and Nvidia, all of which do large percentages of their business in China—with the permission of the CCP, of course.

If I can see this in three minutes on the internet, you can bet the CCP knows it and then some. Why would they see Nancy Pelosi as their enemy? They have to know that her trip, much as I hate to say it because I have visited Taiwan with a delegation and loved it, is basically a charade. Nothing of significance happened. No one, certainly not Nancy, is considering abandoning the “one China” policy.

This is hypocrisy taken to the nth power. Marie Antoinette had nothing on these folks. When Nancy went to Taiwan, she was accompanied by a good portion of the U.S. Navy, including the USS Ronald Reagan aircraft carrier, an item they couldn’t have dreamed of in the French Revolution.

What do you think the junket cost? I couldn’t even give you an over-under. But I do know that the media doesn’t even ask, just as they don’t ask about the massive hypocrisy enveloping virtually all Democratic Party politicians and a fair percentage of the Republicans.

They also know we’re headed for an election that has long looked bad for the Democrats. Right now, they have to look tough, after appearing like marshmallows in Afghanistan. That in itself would constitute a good motivation for the trip. (You’ve heard about a “show trial.” This was a “show trip.”)

The Chinese communists know this, too. They know the real truth, the more important truth, that these men and women, our political operatives—most of them anyway—are lined up like desperate pigs at the proverbial trough trying to get their money.

As long as they have the Pelosis of the world out there yammering for electric cars (when they don’t drive them) and “clean energy” even as their state is plagued with brownouts, the Chinese know it’s full speed ahead for their often defective but always cheap solar collectors and anything else they can sell us idiots for a price by exploiting slave labor.

Does Nancy Pelosi have anything to say about that? Maybe for propaganda purposes. Would she actually do something about what she says? Not a chance. Everyone knows that. Ask her husband. He should be easy enough to reach. No way is he going to jail.