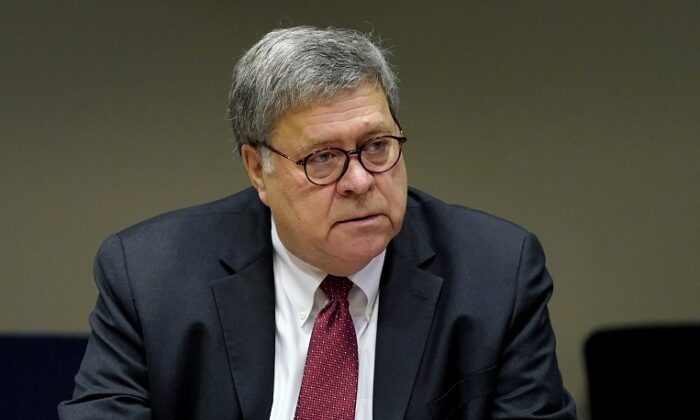 I used to be a big fan of Attorney General William Barr.

Now, as of Dec. 14, 2020, he’s gone, effective Dec. 23, almost a month before the actual end of a Trump administration, assuming that happens.

Technically, Barr resigned, accompanied by the usual complimentary letter to the president, but something obviously went wrong in his relationship with Donald Trump.

William Barr certainly knew how to talk the talk. His October 2019 speech on religious liberty at the Notre Dame Law School is particularly eloquent and meaningful.

If you haven’t heard it, maybe you should as a reminder of the person he could be.

That was the same AG who promised, what seems like decades ago, he would get to the bottom of the reprehensible, treasonous to many, origin of the Trump-Russia investigation, known hereabouts as Spygate.

He assigned John Durham, a reputedly hard-nosed U.S. attorney from Connecticut, to uncover the sources of this outrage and bring the miscreants to justice.

Unfortunately, within that promise soon emerged a hint of trouble to come. Barr informed us that higher officials—meaning, of course, President Barack Obama and Vice President Joe Biden—were not in Durham’s brief to investigate, although they had attended a fateful meeting in January 2016 from whence much may have flowed.

Some people were evidently above the law.

As justification for this, Barr made it seem he was trying to put an end to the politicization of the Department of Justice and the FBI—and maybe he was … in his own eyes.

Meanwhile, Durham’s investigation dragged on, taking much longer than expected, putatively because of COVID.

But was that so?

Certainly, the pandemic caused some inconvenience, but couldn’t grand juries be convened with social distancing and masks? So many other institutions found ways to muddle through.

Some people, we are told, have actually been more productive working from home offices. Surely, there was some way of making Zoom secure or other telecommunications as well for Durham’s purposes.

Apparently not enough. The delay continued and continues to this day.

And then the Hunter Biden affair broke into the headlines with the discovery of Hunter’s laptop and the so-far-uncontested testimony of Biden family business partner Tony Bobulinski, implicating Joe as the “big guy” in dealings with the communist Chinese.

More news broke shortly thereafter that the FBI had had the laptop in its possession for over a year.

This was followed by a leak a couple of months later, interestingly, after Joe Biden had “won” the presidential election, that Hunter and James Biden (Joe’s brother) had been under investigation by the IRS and presumably the DOJ for tax evasion and money laundering for some time, much of this involving those same Chinese communists.

Barr had been mum throughout.

The mainstream media—reliable neo-Stalinists that they are—never reported on any of this when Bobulinski went public. Even now, after the leak, they barely discuss it.

A large portion of the American public had no idea of the Biden Family Scandal when they went to vote on Nov. 3, or, even more, went they dropped those endless mail-in ballots in whatever boxes.

Polls have appeared indicating a significant number would have voted differently had they known. It was a close election, assuming Biden actually won.

His excuse again was that the DOJ shouldn’t get involved in politics. Or was he too angry at Donald Trump for meddling in his affairs?

Or perhaps it was a devotion to an institution rather than to the American people for whom transparency is needed more than ever.

Whatever the case, that is exactly what Barr did, inadvertently or not and despite his denials—get involved in politics.

He put his hands on the scale of a presidential election!

By remaining silent on a lengthy investigation of public corruption of the family of a man who would be president, some of which involves that man directly with our principal enemy, Barr weighed in heavily on the election, whether he chose to believe it or not.

He let the electorate continue in ignorance, straight into the voting booth.

Speaking of which, we also heard nothing from the attorney general about the Dominion voting machines and attendant software. Wasn’t that something the DOJ should have been looking into on an emergency basis to reassure the populace of a fair election?

Recent events in Antrim County, Michigan, where a local forensic investigation was conducted with disturbing results, should have left the DOJ with egg on its face.

What we did hear from Barr was that he had named Durham as a special counsel, apparently so Durham could continue his investigation unfettered if Biden is in office.

Whether that will happen is a moot question. To some degree, this seems to have been a face-saving gesture by Barr.

We live in a time when tens of millions of our citizens distrust the Department of Justice and the FBI. That’s a harbinger of massive social unrest to come, if not more.

Barr was appointed, among other things, to correct this, to reassure those tens of millions that the rule of law still governs in the USA.

It makes me extremely sad to write that he failed.

This article was updated at 7:12 p.m. on Dec. 15, 2020, to include news of Barr’s resignation and the forensic audit of the Dominion voting machines and software in Antrim County, Michigan.