‘The Swamp Is Back,’ McCarthy Says of $1.9 Trillion Relief Bill’s Passage 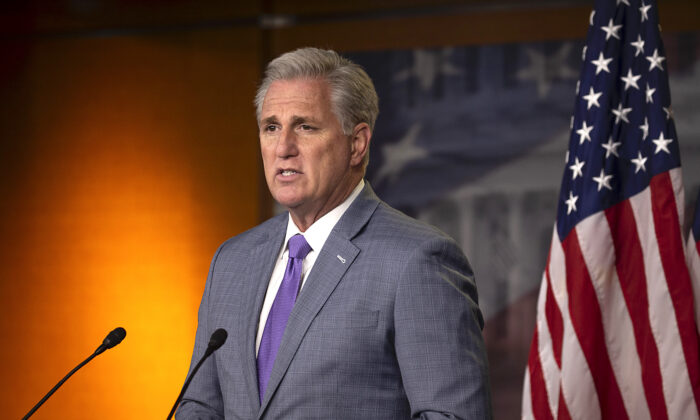 Ahead of a late-night vote that saw the $1.9 trillion pandemic relief package adopted, House Minority Leader Kevin McCarthy (R-Calif.) criticized the bill for its bevy of non-COVID-19-related spending, alleging it caters to “special interest allies” and proclaiming that “the swamp is back.”

“I’m about to say something that the American people don’t want to hear—the swamp is back,” McCarthy said on the House floor late Friday.

In shaping the bill, he accused Democrats of siding with their special interest allies and ignoring the “real needs of the American people.”

The bill was passed around 2 a.m. ET by a vote of 219–212, with all Republicans voting against it. Two Democrats, Reps. Jared Golden (D-Maine) and Kurt Schrader (D-Ore.), cast votes in opposition to the bill. Democrats control the chamber by a narrow margin of 221–211.

The bill now moves to the Senate for another vote, where under a budget reconciliation process, it will be able to move forward by a simple majority vote, instead of needing to meet a 60-vote threshold to break any filibuster in the evenly split Senate. This means that if Democrats vote unanimously, they will not need votes from any Republicans in the Senate for the bill to pass.

McCarthy, in his remarks on the House floor, objected to calling the bill the American Rescue Plan.

While the package includes $1,400 direct payments to most Americans and a $20 billion national plan to vaccinate against the CCP (Chinese Communist Party) virus, the novel coronavirus that causes COVID-19, it also contains $270 million for arts and humanities endowments, $200 million for museums and libraries, and $100 million for an electric train in Silicon Valley.

“It’s a Blue State Bailout, to the tune of $350 billion dollars,” McCarthy said in a tweet. “Sending mismanaged states ‘free’ federal money would encourage the same mismanagement that led to many of their problems in the first place,” he added.

“They jammed through a bill that even liberal economists and editorial boards say is not well targeted to this stage of the fight,” McConnell said. “More than a third of its spending, including more than 90 [percent] of the K-12 school funding, would not even go out this fiscal year.”

“Even worse than all the non-COVID-related liberal spending are the actively harmful policies that would stall our reopening, block rehiring, and slow down the recovery for American families,” he added.

“Just one provision of their bill would kill 1.4 million jobs on its own,” McConnell wrote, presumably referring to the inclusion of the $15 federal minimum wage mandate in the bill. A February study (pdf) by the nonpartisan Congressional Budget Office found that boosting the minimum wage to $15 an hour by 2025 would cost 1.4 million jobs over four years, although it would raise wages for around 27 million people and lift 900,000 people out of poverty.

“We should be optimistically teeing up a roaring American comeback—reopening schools now, accelerating vaccines, and matching laid-off workers with job openings as quickly as possible,” McConnell said.

Calling the bill “the most progressive domestic legislation in a generation,” McConnell denounced the partisan vote as a “deliberately partisan process and a missed opportunity to meet Americans’ needs.”

While the House version of the bill contains the federal minimum wage boost, it is likely to be cut in the Senate version. The Senate parliamentarian ruled on Thursday that the minimum wage hike provision did not meet budget rules under the reconciliation process.

Democrats are hoping for the bill to be signed into law before March 14, when enhanced unemployment benefits and other aid are due to expire.