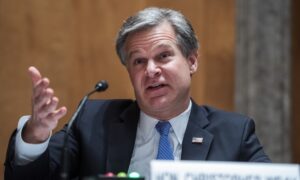 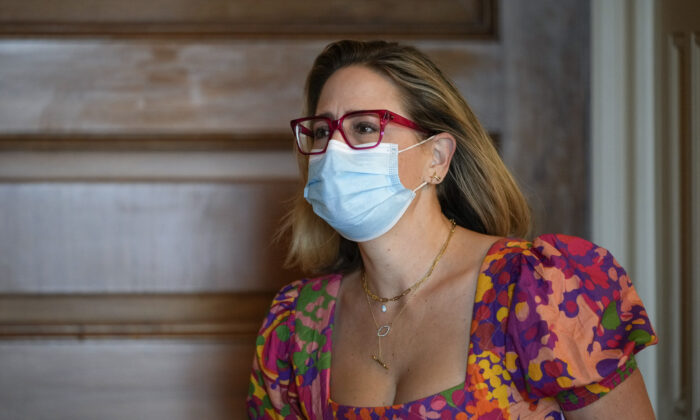 The (Supposed) Sins of Sinema

Arizona’s Krysten Sinema is the first openly bi-sexual senator and the first (I think) to be a female triathlete competitor. She also shows up in Congress in green hair.

These things would normally set the New York Times aflutter as “too cool for school,” but not these days. Ms. Sinema, with Joe Manchin, is blocking what they deem all-important legislation or, as the NYT’s erstwhile arbiter of cool herself (on the oped page since 1995), Maureen Dowd, put it:

“Sinema and Manchin are now directing what Joe Biden gets to do and deciding how his presidency will be defined.”

Are they though? Some of us might think he has already done a pretty decent job of defining his presidency by himself—in the Afghanistan debacle and on our porous Southern border, not to mention a murder epidemic unseen in decades, almost exclusively in our minority communities, after the man occupying the White House for the better part of a year now played “first you say you do and then you don’t” about defunding the police as the sociopaths of Antifa tried to burn our cities down.

Oh, and I forgot, he and his pal Fauci were going to rid us of the dreaded COVID. (Are we or are we not allowed to get together for Christmas? I forget.)

And then there’s that little matter of inflation—due, in great part, to Biden’s non-stop spending spree—that many economists are predicting will be devastating to poor and middle-class Americans. In fact, it already is.

But no matter. Dowd knows what the real danger is and who’s to blame:

“Some Democrats even worry that the recalcitrant pair could be helping Donald Trump vault back into the White House.”

Even? I think they’re terrified of it and they should be, assuming they have read the latest polls—and, since they’re politicians, no doubt they have.

But back to Sinema and her alleged sins. To Dowd—and I think it’s safe to assume this is basically the NYT party line—she’s the scalawag of scalawags, an apostate who must be discredited at all costs.

“Even as Biden traipsed up to Capitol Hill to try to rescue his F.D.R. dreams, Sinema flew back to Phoenix in the middle of nail-biting negotiations on the scope of Biden’s social policy bill.

“Her spokesman said that she had a doctor’s appointment for a foot injury, but The Times reported that she was also slated to play footsie with donors at her political action committee’s dinner at a fancy resort.”

OMG—or should I be more upscale and say “Mon Dieu”—Ms. Sinema meets with her donors!

As opposed to whom, exactly?

The above link goes to OpenSecrets where you can find the contributions to all senators. Only the ultra-naive will be surprised, if you look at the various categories, that Bernie’s contributions are more than a hundredfold those of Sinema’s and come from such “impoverished social workers” as Alphabet (Google), Microsoft, Apple, and so on.

Nevertheless, the New York Times reporter cited by Dowd, Jonathan Weisman, would have us believe that a senator meeting with backers on the same weekend she is having her foot examined is actually information that disqualifies her. It’s not even “dog bites man” when it comes to being news.

This is no surprise considering the level to which the NYT trucks in propaganda. We have yet to have a serious apology, other than some perfunctory uttering from Dean Baquet, for their two years of outright lies on Trump-Russia collusion, all based on anonymous sources, for which they gained multiple Pulitzers for the writers.

And they haven’t even had the basic morals to give the prizes back.

But returning again to Sinema, I have a suggestion for the NYT, and anyone else interested, for that matter, on just why the Arizona senator is balking on Biden’s multi-trillion dollar social policy bill.

Call it good old Occam’s Razor. Maybe she—like the majority of Americans, as it happens—thinks the three trillion plus price tag (no one’s really sure of how much it will ultimately cost. Three trillion… five trillion… eight trillion… pretty soon, as the jokes goes, you’re talking about real money) is anywhere near the benefit that could accrue from it or the damage that could come from escalating inflation that we have already seen at the gas stations and supermarkets of this country. (Welcome to Weimar.)

She may also think—I’d bet on it, in fact—that Joe Biden is full of it when he claims this spending is revenue neutral. It’s anything but. Joe doesn’t exactly have, to be kind as possible, a great reputation for probity.

Finally, she probably thinks she was elected by her constituents to represent what they believe. It’s a safe bet endlessly printing money for no sensible reason ranks pretty low among them.

Whether they acknowledge it or not, they are the spiritual and intellectual mothers and fathers of the creeps that pursued Sinema into a bathroom at Arizona State University in Phoenix Sunday.

So is the President who calls being followed into bathrooms “part of the process.”