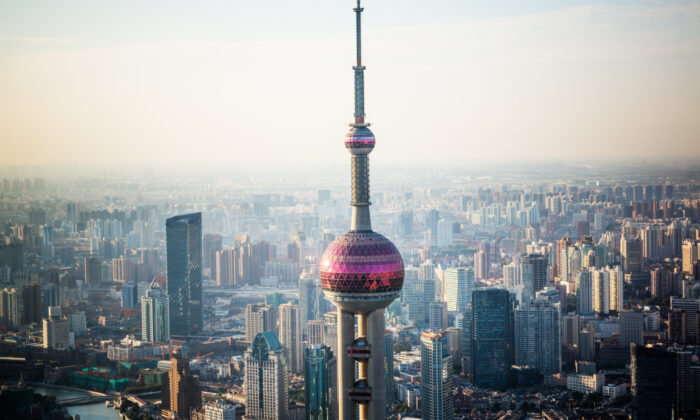 The skyline of Shanghai in seen in a file photo. (ssguy/Shutterstock)
Viewpoints

The Shanghai Catastrophe: Lockdown Ideology at Its Most Extreme

Highlight the hundreds of millions of victims of communism, and its advocates are known to try to rebut the evidence by claiming that real communism has never been tried.

As an extension of this debate, the global Public Health cartel, whose advocates relentlessly pursue totalitarian solutions to attempt to stop a virus from spreading, are known to defend their lockdown advocacy by claiming that real lockdowns have never been tried. When faced with the reality that lockdowns have failed everywhere they have been tried, the lockdown advocates push back by claiming that such lockdowns are not up to their Pyongyang Standard of authoritarian rule.

In Shanghai, however, we are finally witnessing the most ferocious lockdowns to date. The full Pyongyang Standard. This utopian “hard lockdown,” dreamed about for two years by the likes of Bill Gates, Anthony Fauci, the World Health Organization, Ivy League academia, and the rest of the global Public Health cartel, is now playing out in Shanghai.

To these individuals and groups, the horrific tyranny we saw in Wuhan, Australia, New Zealand, Canada, and elsewhere around the world were a good start, but still, not tyrannical enough for their liking.

Dr Fauci:
“.. best thing that we can do really is to get …control over …replication of the virus. This was something the US had not managed to do in the same way as Australia because Australia’s lockdowns were more stringent and effective. “ https://t.co/RrIqTnXLtg

They finally got what they wanted in Shanghai. And just as expected, the result of the Pyongyang Standard has come in the form of unprecedented human carnage.

As I discussed previously in The Dossier, tens of millions of people in the Shanghai metro have been locked in their homes for several weeks. Their freedom of movement has been entirely eliminated.

Shanghai residents are only allowed to go outside to take a COVID test, and a positive test means they are hauled off to COVID detention camps for an indefinite period of time, while the state sends agents into their homes to murder their pets. There have been countless reports of suicides, starvation, mass civil unrest, and other forms of hell on earth for those trapped inside of Shanghai.

“It’s for your health” pic.twitter.com/Xst2rWrkO7

Many under lockdown are facing impending starvation, as China’s top-down tyranny is unsurprisingly, struggling to replace market forces in its attempt to micromanage food deliveries to an immobilized population.

People in the financial hub are reportedly running out of food, water and other necessities, with many said to be on the brink of starvation.#China #Shanghaihttps://t.co/i098tcxgNn

Even worse, these shut downs have not even achieved the stated purpose of the lockdowns: stopping the spread of COVID-19. Now weeks into the lockdown, China continues to register massive amounts of COVID cases. On Monday, they reported a record high number.

Chinese Communist Party authorities are not fazed whatsoever by the human carnage they have manifested. In media appearances Monday, CCP leaders took to doubling down on “the measures” most admired by the Public Health cartel. They remain tethered to “Zero COVID” fanaticism, defiantly declaring that living with the virus remains off the table.

At one point, Liang says that faced with the Omicron variant, some countries opted for the policy of 躺平- lying flat—allowing the virus to infect people, causing great harm to the lives, health and social production. China, on the other hand, adheres to dynamic zero-COVID and its socialist system “has a strong ability to organise and mobilise,” which along with the support of the people, scientific tools and the experience of fighting the epidemic will help it ensure the success of the zero Covid strategy.

China has fully embraced the “public health” ideology, and notably, none of its top Western advocates have taken to celebrating the scene in Shanghai, which amounts to the culmination of their utopian vision.