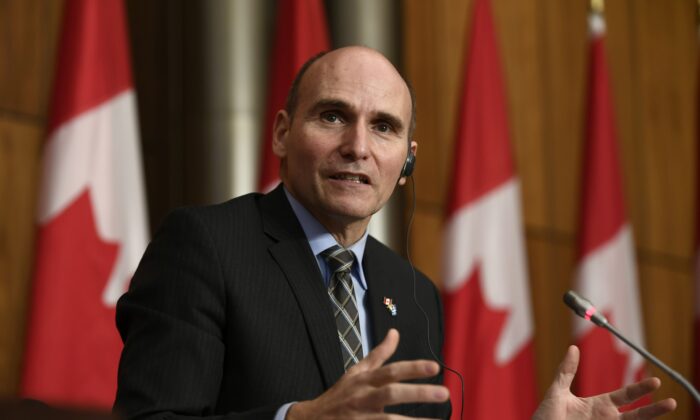 Health Minister Jean-Yves Duclos speaks during an update on the government’s response to the pandemic, in Ottawa on Dec. 10, 2021. (The Canadian Press/Justin Tang)
Viewpoints

The Scary Ramifications of Making COVID Vaccination Compulsory for Everyone

If we don’t have the right to bodily autonomy, we have no rights at all. There is no right more sacred than that of the individual to choose what may or may not be imposed upon their physical being.

Two years ago it would have been unimaginable to consider any developed nation violating this most fundamental of rights. Now, however, we are seeing a handful of nations as ostensibly democratically advanced as Austria imposing mandatory vaccination upon its citizens while Canada’s federal health minister has proposed similar incursions upon our bodies.

This is a troubling new development in a world gone mad over the COVID-19 pandemic, and we need to pay attention. If we let go of the right to control what goes into our bodies, we will not easily get it back.

When Health Minister Jean-Yves Duclos pitched mandatory vaccinations for Canadian citizens, I was enraged but not surprised. Authoritarians will never stop working to extend government control upon citizens. The Trudeau administration has hardly hidden the contempt it feels for citizens who have chosen not to get vaccinated.

Prime Minister Trudeau made international news when he likened the unvaccinated to racists and misogynists in an interview last September. There has been a concerted attempt to villainize and even dehumanize Canadians who have thus far chosen not to get vaccinated. When the prime minister is willing to make the absurd comparison between the vaccine-hesitant and racists, it is hardly shocking that his senior ministers are feeling inspired to infringe upon the rights of this new underclass of citizens.

My expectations for the federal government when it comes to respecting human rights are low, and the government has been meeting them. What has me more concerned is the docile response from Canadian citizens as they passively shrug off a proposal from the federal government to mandate medication upon the citizenry. We should be screaming our opposition to forced vaccinations from the rooftops, yet our collective silence is deafening.

It was good to see premiers Jason Kenney and Scott Moe quickly expressing opposition to Duclos’s musings. Kenney tweeted: “Alberta’s Legislature removed the power of mandatory vaccination from the Public Health Act last year and will not revisit that decision, period.”

While it’s nice to see premiers expressing opposition to mandatory vaccinations, it can’t be forgotten that Kenney’s words were just as uncompromising when he opposed the imposition of vaccination passports. Alberta later embraced vaccination passports despite Kenney’s vows not to. We can’t rest assured that our premiers will protect us from forced medication.

The erosion of our rights has been an incremental thing. In the last two years, we have suspended rights to freedom of movement, association, and commerce in the name of fighting the pandemic. We let those rights go with nary a whimper so we shouldn’t be startled when the state seeks to take away our very sovereignty of person.

We can’t let the discussion over forcing medical treatment upon unwilling citizens get sidetracked into debates over the efficacy of vaccinations. How good or bad vaccines may be is irrelevant. We must remain focused on the right and ability for citizens to choose what may be done with their bodies.

The state has created and identified a minority within its citizenry, and is blaming that minority for the ills of the nation. Political leaders are inflaming the population and working to turn the majority against the minority in order to justify the suspension of individual rights. This is a very dangerous road we are travelling down.

Whatever happened to the rallying cry of “My body my choice!”

Most of those who now remain unvaccinated will not willingly get vaccinated under any circumstances. They have been banned from travel, locked out of business establishments, and put out of work. They have been ostracized and demonized. Do we really want to see scenes where people are physically restrained and injected or perhaps jailed until they comply? That is the only way we will see a fully vaccinated population.

I got vaccinated, and I honestly hope that more people choose to do so. But I would never consider for a second abiding by my fellow citizens being vaccinated through force. The loss of the right to control my body scares me much more than any virus ever will.

If we allow mandatory vaccine mandates to happen, we won’t be on the slippery slope of losing rights. We will have already hit bottom.