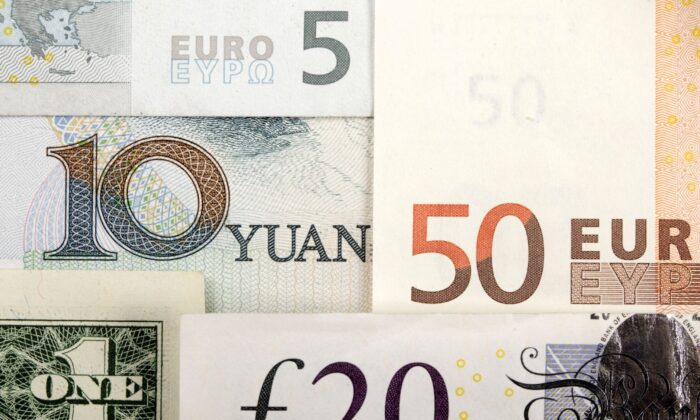 This is the second of a two-part article articulating the risks of CCP China’s new digital yuan, the e-CNY.

Part I details the risk to people and businesses in CCP China.

This Part II addresses the geopolitical and geostrategic risks of the digital yuan to other nations and Western-style democracies.

The power the CCP will exercise from e-CNY that I described in Part I won’t be limited to the borders of CCP China.

There is a bigger, looming, threat, and it’s global.

CCP China’s “Belt and Road Initiative” (BRI) is intended to spread commercial and geopolitical influence in Central, South, and Southeast Asia, as well as into Europe and the Middle East.

For less developed economies, e-CNY may be a godsend that allows access to payment and banking services, but it’s also a Trojan Horse. While payments can be transferred far more easily in, say, the desolate areas of Afghanistan, they can also be monitored, controlled, and prohibited.

So if the e-CNY becomes the preferred—or only—currency in your remote part of the world where the CCP is engaged in the BRI, it can sanction behavior via the e-CNY. If you or your local community object to seizing farmland for a BRI development, good luck surviving without what may be your only means of paying or receiving money. You’ll be under the same CCP thumb of control as the common Chinese people.

But the larger risk is to the global economy.

One can easily imagine the CCP eventually pushing OPEC and individual oil-producing nations to price their oil in e-CNY and bypass the petrodollar, which has been a critical element of U.S. economic power and foreign policy for nearly half a century. Since many of the countries with which the United States has had disputes, and for which it has imposed sanctions, sit atop oceans of oil, the e-CNY would be an attractive incentive for them to price their oil in CNY.

Most oil-producing nations, including most OPEC nations, price their oil in U.S. dollars (USD).

Consequently, nearly every country keeps USD reserves for oil payments and to otherwise participate in the U.S. economy. But those dollars aren’t sitting in a vault; they’re recycled back to the United States as investments, often in U.S. Treasury securities. They help fund our exorbitant deficits and debt. (Even CCP China funds our debt, returning the USD we use to pay for their exports back to the USA as Treasurys, real estate, and equity investments.)

Were the CCP to succeed in undermining the petrodollar, it would likely significantly reduce the demand for USD and increase demand for CNY. Instead of the USD being the world’s reserve currency, a position it has held since 1944, it would fall back to be among one of several “reserve” currencies, including the euro, the CNY, and the JPY. Theoretically, having achieved an advanced standing as a reserve currency, it’s possible—even likely—that CCP China could then further consolidate CNY’s status by setting the prices for rare earths or even its everyday exports of things like toys, computers, etc. in CNY. (To give you a peek at the world where multiple currencies reign alongside the USD, when President Obama’s then-novice treasury secretary, Tim Geithner, said in 2009 that he was open to a basket of currencies replacing the USD as the world’s reserve currency, the dollar tumbled in moments before Treasury walked Geithner’s comments back.)

If a good portion of global USD demand disappears because oil starts to be priced in e-CNY, and CCP China further capitalizes from there on its standing as a leading world reserve currency, the United States would have to raise its interest rates to lure foreign investment in our debt securities or, perhaps, devalue the dollar, which would significantly boost inflation.

Finally, from a geostrategic perspective, the rise of the e-CNY as a reserve currency would allow countries subject to sanctions by the USA or international institutions, like Nato, the EU, or the U.N., to avoid them.

That’s because those sanctions are usually administered by SWIFT, the Society for Worldwide Interbank Financial Telecommunication, based in Brussels. It’s how funds move around the world. But e-CNY allows anyone with an internet connection to transfer value. The world’s ability to affect the plans of bad actors—often friendly with CCP China—would be significantly hindered, and national and global security risks increased.

CCP China hopes to introduce the e-CNY as an international currency during the Winter Olympics this coming February.

Three U.S. senators have requested the U.S. Olympic Committee to prohibit U.S. Olympic Team members from using it, drawing a rebuke from CCP China authorities. The free Western-style democracies that have joined the diplomatic boycott of the 2022 Winter Olympics should follow the senators’ request, as should the U.S. Olympic Committee: Do not submit to pressure, or accept the convenience, of using the e-CNY during the Olympics; avoid it entirely.

If that cannot be done (i.e., if the only payment option in the Olympic Village is e-CNY), then Olympians should be provided single-use telephones by their respective national Olympic committees, loaded with an e-CNY per diem, to be used exclusively for e-CNY spending. The phones should then be returned to the committees and destroyed at the end of the Olympics to prohibit further CCP surveillance of the athletes.

Federal Reserve Chair Jay Powell, the Federal Reserve, Congress, and President Joe Biden should move with all deliberate speed to finalize an e-USD that can compete head-to-head with the e-CNY. Research has been underway between the Fed and MIT, but that should be addressed with the same urgency of the Space Race or the Missile Gap of the early 1960s.

The United States also needs to get a handle on its deficits by cutting the costs of government, eliminating lucrative—and blatantly unfair—tax loopholes, such as the tax treatment of carried interest and the home mortgage interest deduction (which only a handful of other countries permit).

It is vital for the United States economy and for our national security that we continue as the global currency hegemon, whether that be in greenbacks, bank accounts, or a USD CBDC. The United States should lead Nato, in partnership with the EU, Japan, South Korea, Australia, India, and the other Western-style democracies to contain the spread of e-CNY.

Our future—and the future of the free world—depends on it.