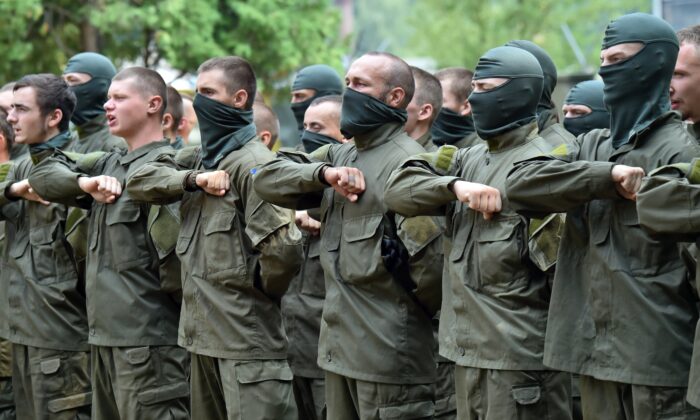 Recruits of the Azov far-right Ukrainian volunteer battalion take their oaths during a ceremony in Kiev, on Aug. 14, 2015. (SERGEI SUPINSKY/AFP via Getty Images)
US Features

In the West’s zeal to support Ukraine in its fight against the Russian invaders, some observers worry that Ukrainian neo-Nazi paramilitaries will benefit from U.S. support—a situation that would heighten security risks at home.

On her Feb. 28 appearance on the Rachel Maddow Show, Hillary Clinton joined the growing number of those calling for the U.S. government to support a Ukrainian insurgency.

It wouldn’t the first time the U.S. government backed an armed insurgency to counter Russia, as Clinton noted.

“The Russians invaded Afghanistan back in 1980. [Afghanistan] had a lot of countries supplying arms and advice, and even some advisers, to those who were recruited to fight Russia. It didn’t end well for the Russians,” she said.

“There were other unintended consequences, as we know. But the fact is that a very motivated, and then funded and armed, insurgency drove the Russians out of Afghanistan.”

Clinton didn’t describe those “unintended consequences” of supporting the mujahideen: An empowered Taliban replaced the Russian-backed Afghan government, turning the country into a terrorist hotbed that led to 9/11 and an ensuing 20-year war for America.

Nevertheless, all indications are that the United States will be pursuing an insurgency strategy against Russia. The Army Times reported Feb. 28 that the United States is sending Stinger anti-aircraft missiles to Ukraine, and it was revealed in January that the CIA has been training Ukrainian paramilitaries since 2015 to prepare for the exact scenario of a Russian invasion.

“U.S. and Ukrainian officials have long planned for this day. In all likelihood, a covert program to help organize the resistance to Russia already has communications infrastructure, intelligence collection capabilities, and operational plans in place,” London, who worked in the CIA’s clandestine service, wrote in Foreign Affairs.

“Supporting an insurgency is in the CIA’s DNA … The CIA’s recent experience in supporting and fighting insurgencies in Afghanistan, Iraq, and Syria prepares it well for opposing Russia’s modern, conventional forces.”

Some analysts predict that the coming insurgency could last a decade, or longer. Citing an unnamed U.S. official, CBS reported March 1 that U.S. lawmakers were briefed on the matter that day.

“The U.K. foreign secretary estimated it would be a 10-year war. Lawmakers at the Capitol were told [Feb. 28] it is likely to last 10, 15 or 20 years—and that ultimately, Russia will lose,” CBS said.

If the analysts’ projections hold true, one of the main insurgent groups in Ukraine would be the Azov Battalion, which has been battling Russian forces since helping overthrow Ukraine’s pro-Russian government in 2014.

The Azov Battalion’s allegiance to the neo-Nazi ideology is well-documented, with its former commander once calling for Ukraine to “lead the White Races of the world in a final crusade for their survival.” More recently, Azov fighters were seen on a viral tweet from Ukraine’s national guard greasing their bullets with lard against the “Kadyrov orcs”—to be used against the Muslim Chechens fighting for Russia.

Arming Azov was once a cause for concern among U.S. lawmakers. In 2018, Congress inserted a provision in its defense spending bill that banned U.S. arms from going to Azov, which had already received U.S. training and weapons the year prior.

But with Ukraine in desperate need of its best fighters to repel a Russian invasion, empowering the country’s far-right elements hasn’t been an expressed concern for U.S. policymakers, said Bellarmine University professor Abigail Hall, a researcher on extremism and militarism. Indeed, Facebook has reportedly loosened its policies to allow for posts praising the neo-Nazi Azov fighters, while numerous other outlets have uncritically reported Azov propaganda, according to the media watchdog Fairness and Accuracy in Reporting (FAIR).

“When policymakers are talking about this, they’re brushing off these concerns—saying, ‘Yeah, well there’s an emergency right now.’ And that’s understandable in some ways, but there are risks,” Hall told The Epoch Times.

The Pentagon did not respond to queries about what, if anything, it’s doing to ensure that Azov doesn’t receive U.S. weaponry. History suggests that governments have little control over their arms once delivered to a war zone, according to Hall, co-author of “Tyranny Comes Home: The Domestic Fate of U.S. Militarism.”

In Syria, for example, the Obama administration’s failed attempt to oust the country’s president, Bashar al-Assad, resulted in U.S. arms going to al-Qaeda affiliate Jabhat al-Nusra. This prompted Clinton, then-Secretary of State, to ponder during a 2012 interview with a CBS News reporter: “We know al-Qaeda—Zawahiri—is supporting the opposition in Syria. Are we supporting al-Qaeda in Syria?”

The ongoing conflict in Yemen has also resulted in U.S. arms falling into the hands of al-Qaeda in the Arabian Peninsula (AQAP).

“It’s safe to say that the U.S. doesn’t have a particularly good track record of tracing where weapons go, once they’re dispersed,” Hall said.

As in the Middle Eastern conflicts, Ukraine has attracted fighters from the West, said Hall. But instead of jihadists, a Ukrainian insurgency is likely to bring an influx of neo-Nazis and other right-wing extremist groups that have ties to Azov.

U.S. extremist groups have already allegedly traveled to Ukraine to train with Azov. The FBI said this during the prosecution of right-wing Rise Above Movement (RAM) members for allegedly assaulting protesters in 2017.

According to an FBI agent who investigated that case, RAM members met with an Azov official in Europe in August 2018.

“The Azov Battalion … is believed to have participated in training and radicalizing United States-based white supremacy organizations,” the FBI agent said.

According to the Site Intelligence Group Enterprise, U.S. neo-Nazi groups have been amplifying Azov’s recent calls for foreign volunteers.

An influx of human and physical capital would not only strengthen Azov in Ukraine; it could also heighten the domestic terrorism risk at home, said Hall.

“To the extent that this would provide an opportunity for individuals to gain combat experience and the potential to radicalize, then you could very well see those people coming back and integrating those types of tactics and tools into their existing or new domestic extremist groups here,” Hall said.

The notion that American participation in foreign conflicts could result in domestic extremism is far from theoretical.

During the 1980s Contra War in Nicaragua, for example, Vietnam war veteran Thomas Posey started the Civilian Material Assistance (CMA) to assist the Contra rebels in their fight against the Russian-back government there.

President Ronald Reagan reportedly called Posey a “national treasure” at one point. But after the Iran-Contra scandal, Posey was indicted for weapons smuggling.

Though he beat the charges, Posey reportedly felt betrayed by the series of events. According to the work from extremism researcher JM Berger, Posey became radicalized, turning the CMA into a “survivalist-type group” opposed to the U.S. government and aimed at networking with white supremacist organizations across the country.

Posey committed numerous crimes and hatched several terrorist plots in the early 1990s before being arrested for allegedly plotting to steal a cache of automatic weapons from the armory of the Browns Ferry Nuclear Plant in Alabama. Along the way, CMA also developed connections with Oklahoma City bomber Timothy McVeigh, with members training at the same San Saba, Texas, property as McVeigh, according to former CMA member and FBI informant John Matthews.

With the Russian threat looming, Hall said it’s somewhat understandable that policymakers don’t consider the complex, chain of events overseas that can lead to blowback at home—such as in the cases of the 1980s Afghan insurgency and Contra War.

“But it’s in those times of emergency that you really need the appropriate checks and balances in place to understand exactly what your policies are doing,” she said.

The State Department did not respond to questions about its policies on Americans traveling to Ukraine to participate in the conflict against Russia.