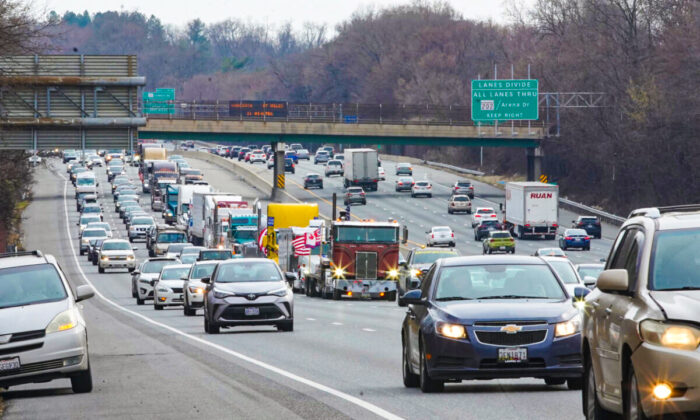 The lead red truck for The People's Convoy in Maryland on March 6, 2022. (Enrico Trigoso/The Epoch Times)
District of Columbia

HAGERSTOWN, Md.—A trucker-led convoy left Maryland on March 7 to loop around the Capital Beltway as the group demands an end to the COVID-19 national emergency declaration.

The People’s Convoy was delayed because of concerns regarding potential infiltrators who are intent on causing “harm, violence, and disruption,” Brian Brase, an organizer of the convoy, told those who gathered before the group took off.

He also warned of drivers who are opposed to the convoy cutting in front of the group and abruptly braking.

The convoy, which trekked across the country from California, is protesting President Joe Biden’s continuation of the emergency declaration, COVID-19 vaccine mandates, and other policies.

The U.S. Senate recently approved measures that would end the emergency and block the Biden administration’s vaccine mandate for health care workers, but the Democrat-controlled House of Representatives isn’t expected to vote on either piece of legislation. Biden promised to veto the former measure if the House does approve it.

The convoy, which is staying in Hagerstown, plans to continue to circle the Beltway until their demands are met.

The Beltway loops for 64 miles around Washington and primarily runs through Maryland and Virginia. Organizers are encouraging participants to drive at the speed limit, which is 55 miles per hour.

“We don’t want to break the law. We’re going 55,” said Brase, a truck driver from Ohio. “We’re out here to make a statement.”

The convoy has at least 1,000 vehicles and drew support while completing two loops around the Beltway on March 6.

Well-wishers gathered on highway overpasses, holding American flags and cheering the group as trucks and cars passed by.

In a statement after the loops were completed, the convoy stated that the group was wrapped “head to tail” around the road.

Law enforcement in Virginia and Washington told The Epoch Times that there were no traffic disruptions or reported crashes linked to the convoy. A Maryland State Police spokesperson declined to immediately comment.

Organizers said they have meetings planned with members of Congress “to have thoughtful and constructive dialogue around our demands.”

Brase declined to name any of the members other than Sens. Ted Cruz (R-Texas) and Ron Johnson (R-Wis.).

“Until they confirm it, we’re not releasing who they are,” Brase said.

Cruz and Johnson announced in a joint statement later Monday they “will meet with The People’s Convoy to discuss the harmful effects of President Biden’s vaccine mandates.”

Some in the convoy wanted to venture into Washington, but the group hasn’t done so thus far amid concerns that they won’t be treated well by law enforcement there.

A separate convoy gathered at Dominion Raceway in Thornburg, Virginia, on March 6. R.C. Pittman, one of the convoy’s organizers and who was in Washington on Jan. 6, 2021, told The Epoch Times that he didn’t want to “subject himself” to poor treatment by federal law enforcement.

Gordon Lewis, standing next to his red pickup truck, drove from Texas to join the rally. The small-business owner said he didn’t want to “just sit back” as the United States is “going to ruin, to communism.”