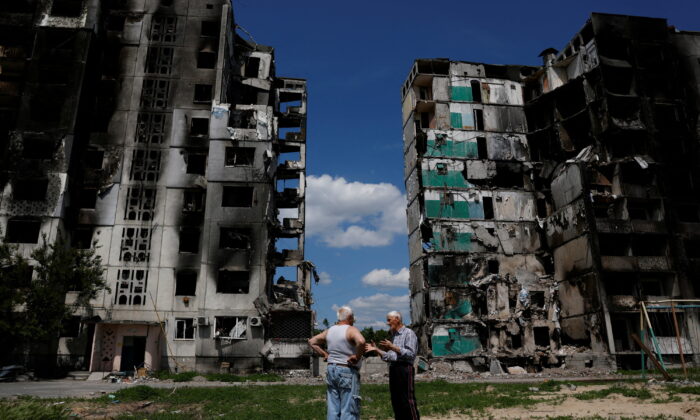 Conrad Black: The Origins and Purposes of the Ukrainian War

It’s time for a comprehensive fact-check on the origins and purposes of the Ukrainian war.

The underlying issue is the ultimate disposition of the 14 republics apart from Russia that seceded from and produced the dissolution of the Union of Soviet Socialist Republics in 1991. Russia has never acknowledged the legitimacy of those secessions, and they were accomplished abruptly by the governments and legislatures of the jurisdictions involved, without the formality and legitimacy the break-up of countries requires.

As the Soviet Union fell like a soufflé without a shot being fired (after a Cold War in which there were routine reciprocal threats of nuclear annihilation), many promises were made by the major powers, including Russia and the United States, and none of them was kept. When the last Soviet leader, Mikhail Gorbachev, acceded to the reunification of Germany, then-Secretary of State James Baker assured him that NATO would not advance “one inch” to the east of Germany. The president whom he served, George H. W. Bush, famously gave what Nixon speechwriter William Safire called the “Chicken Kiev speech” to the Ukrainian parliament recommending that it remain in union with Russia, in 1991. All of the major powers, including Russia and the United States, promised Ukraine, Belarus, and Kazakhstan, that their borders would be respected, in exchange for the renunciation in 1994 of the nuclear weapons that they had inherited from the Soviet Union.

Needless to say, all of these solemn promises were forgotten almost as soon as they were made. In the next several years, NATO accepted as members Poland, Hungary, the Czech Republic, Slovakia, Bulgaria; and Latvia, Lithuania, and Estonia, which had been constituent republics of the Soviet Union and had been fully integrated into Russia for more than 200 years prior to the end of World War I in 1918. President George W. Bush advocated the eventual admission to NATO of Ukraine and Georgia in 2008, but this was deferred as Russia invaded two largely Russian-speaking provinces of Georgia and intervened heavy-handedly in Ukrainian affairs. Russian meddling enabled the election of an outright puppet of the Kremlin in Ukraine, Viktor Yanukovich, in 2010, and Western counter-meddling achieved his ouster and replacement by Petro Poroshenko in 2014.

It must be admitted that Ukraine has never shown the slightest aptitude for successful self-government until its inspiring performance following the Russian invasion of Ukraine three months ago. It’s an ethnic hodgepodge of Russians, Lithuanians, Poles, and Tatars, and approximately one-sixth of its population of over 40 million is Russian-speaking.

The likeliest explanation for what brought on the present war is that the on-again, off-again Western enticement of NATO membership for Ukraine collided with the ambition of Russian President Vladimir Putin, Russia’s most purposeful leader since Leonid Brezhnev, to assert Russia’s partial authority over its former fellow republics of the USSR.

It isn’t surprising that Putin thought that this was the time to act: The unimaginable shambles of the American flight from Afghanistan and the complete failure of the United States to enunciate any consistent policy about the former Soviet Union could well have convinced him that this was his chance to begin reassembling the involuntary Confederation of ethnicities put together over more than 250 years by Peter the Great, Catherine the Great, some lesser Czars, and Joseph Stalin.

Many readers will remember the inanity of President George W. Bush’s assertions that he looked Putin in the eye, and the reassuring importance that Putin attaches to his cross. President Barack Obama appeased Putin by withholding the promised anti-missile defenses for Poland and the Czech Republic, as if such defensive weapons could remotely be considered a provocation to Russia. The Pentagon has contributed to the present confusion by taking the immense budget granted it by President Donald Trump and failing to keep pace with Russia and China in hypersonic weapons, in providing adequate antimissile defenses for America’s Nimitz class aircraft carriers, and possibly in some areas of artillery as well. This may explain why the United States and NATO generally have been clearly intimidated by Putin’s nonsensical threats to resort to nuclear weapons.

Because of this saber-rattling, which is much less believable and nerve-racking than the antics of Soviet leader Nikita Khrushchev in the 1950s, President Joe Biden allowed the Pentagon to repudiate Secretary of State Antony Blinken’s public pledge to facilitate the transfer of Polish warplanes to Ukraine as “escalatory” (what was the Russian invasion?), and has declined to provide high-altitude anti-aircraft missiles and any Ukrainian capability to reply with offensive weapons that would reach inside Russia as a response to the relentless Russian aerial assault on Ukraine’s civil population.

Apart from the Ukrainian government, which has played its hand, militarily and in public relations terms, brilliantly, almost every conceivable blunder has been made by both sides in the present conflict. It’s inconceivable how Putin and his advisers imagined that they could, with only 150,000 trigger-pullers, overrun a country of over 40 million people defended by a trained army and reserve of half a million well-armed men. Ukraine possesses the possibility of a high manpower advantage unless Russia conducts a general mobilization, which would be extremely unpopular, and hideously expensive for a country with a smaller GDP than Canada. Ukraine has the advantage of having most of its war effort paid for by rich NATO countries; in that sense only is there any truth in the Russian government’s claim, echoed by a number of conservative isolationist American commentators, that Russia is at war with all NATO.

But there’s no truth to the claim of those American commentators that Ukraine is of no strategic value to the West. It’s making a bona fide effort to make democracy work and it’s the subject of a brutal and completely illegal and unprovoked attack. The consequence of permitting Russia to succeed in this criminal enterprise would be to provide convincing evidence that the United States is in inexorable decline and that it’s open season on the crumbling Western alliance as the Kremlin took a giant leap toward undoing the West’s epochal strategic victory in the Cold War.

Readers will painfully recall the total defeatism of Biden and the joint chiefs at the outset of the Ukrainian war, when Kyiv was expected to be occupied within a few days and Biden offered to evacuate president Volodymyr Zelenskyy and his family, and made sophomoric comments about the Russian ruble becoming “rubble” and the strength of sanctions, which since they’re being ignored by 155 countries in the world are a gigantic Swiss cheese. When the strength of Ukrainian resistance became clear, Biden spoke of Putin being mad and sick and a “war criminal” and that regime change was necessary, even as he backed down before Putin’s juvenile nuclear threats. There has been no clarification of Western war aims and a large quantum of aid is to some extent a substitute for giving Ukraine the weapons they need to provide the Russians an incentive to end the war.

As I have written since before the start of this war, we have the ability in the West to ensure that Ukraine is recognized as a sovereign state as long as we provide the Russians with some recognition of their traditional status in that country—assumedly the autonomy under Russian suzerainty of the Russian-speaking sections of the country but with an iron-clad Russia-NATO guarantee of the security of Ukraine’s modified borders. Zelenskyy cannot expect more; the geopolitical reality is that Putin doesn’t have to settle for less; American isolationists should be given a brief tutorial in geopolitical realities; the entire senior level of the Pentagon should be sacked; and NATO-U.S. will have to provide the weapons necessary to bring the war to a negotiated end. As long as the Russians can kill and terrorize Ukraine’s civilian population from the air with impunity, the war will go on and the tragedy will become greater.