The Oldest and Most Important Chinese Painting Masterpieces at the MET

It is not often that a Chinese painting on rice paper survives over 1,000 years so that we can view it intact, in all its splendor.

One such masterpiece is “Night-Shining White” the painting of the imperial horse by the same name painted by Han Gan (742–756) during the Tang Dynasty (618–907). Dated circa 750, the work is part of the grand exhibition titled Masterpieces of Chinese Painting from the MET’s Department of Asian Art, which is celebrating its 100th anniversary this year.

The exhibition encompassing 110 works of the brush arts of China, dating from the Tang Dynasty to the present has undoubtedly drawn the attention of collectors and Chinese art connoisseurs.

Among them is New York based Chinese fine art dealer and collector Tony Dai who spoke to the Epoch Times about some of the most memorable works in the exhibition and their historical significance.

The show presents a rare opportunity.

Dai mentioned that many of the paintings haven’t been shown to the public for a long time, and the exhibition allows people to get a better understanding of classical Chinese painting from the Tang Dynasty to the Qing Dynasty (1644–1911).

“Night-Shining White,” for instance, is over 1,300 years old. Painted on rice paper, it is a vivid depiction of the favorite steed of Emperor Xuanzong (who reigned 712–756) by Han Gan, who was renowned for his paintings of horses.

The multitude of red stamps on the painting are an indication of the number of collectors who owned it—one of the seals being that of Emperor Qianlong (who reigned 1735-1796) during the Qing Dynasty.  Qianlong has been documented as having owned the painting and treating it as a very important piece in his collection. Other seals, according to Dai, are from art connoisseurs who added their stamps during the Ming (1368–1644) or Qing dynasties thus authenticating the work.

When Chinese artists learned painting, their masters would teach them how to be a good person in society first, before actually learning the technique.
— Tony Da, Chinese fine art dealer/collector

The horse is also the subject in three other well-known paintings that are part of the exhibition. The three works are known as “Grooms and Horses” painted during the Yuan Dynasty (1271–1368) by artists from the same family, one of the artists being the legendary Zhao Mengfu (1254–1322).

A selection of works from the Ming Dynasty (1368–1644) includes “Elegant Gathering in the Apricot Garden,” a rare masterpiece and celebrated 15th century work depicting in sumptuous detail the life of Ming nobles and literati.

A much emulated and reproduced Chinese painting is “Narcissus”—a handscroll filled with swaying and overlapping flowers that is charged with historical meaning. Painted by Zhao Mengjian (1199–1264), a member of the Song imperial family, not long before the fall of the Southern Song Dynasty (1127–1279), it has come to be associated with loyalty to the fallen dynasty.

Dai also pointed out that for Chinese scholars, the narcissus represents high morality as well as immortality because in Mandarin the pronunciation of the flower name is the same as the word for immortality.

Marriage or Chastity? The Story Behind a Chinese Proverb

The final gallery is devoted to the Qing Dynasty (1644–1911). Two massive handscrolls from the Qing imperial court that document inspection tours of the southern part of the empire taken by two emperors, Kangxi (reigned 1662–1722) and Qianlong (reigned 1736–1795) fill the entire wall more than 50 feet long, providing a rare opportunity to view them side by side.

The scroll is dated 1698 and painted by Wang Hui (1632–1717) and his assistants depicting Emperor Kangxi’s tour from Ji’nan to Mount Tai. It is significant not just for its artistic merits, but also because it was commissioned by one of China’s most revered emperors.

The Visual Legacy of Emperor Kangxi

As the second emperor of the Qing Dynasty, Kangxi is known as China’s most learned and cultured emperor. Historical texts document that he was able to read by the age of 5, and when he ascended the throne at the age of 8, he became even more dedicated to his studies.

Emperor Kangxi’s 60-year-long rule brought stability to the country, Chinese literature, and art flourished, and he was meticulous about keeping historical records. This extended to compiling what is regarded as the greatest Chinese dictionary to date—the Kangxi Dictionary. Kangxi also undertook many tours throughout the empire, which served to stabilize Manchu rule throughout the country, but also to map much of China.

Walking alongside ‘Picture of the Southern Tour’ and viewing its scenes in sequence is an almost cinematic and touching experience.

The scroll that is on display provides a glimpse of the emperor’s journey from Ji’nan to Mount Tai. It is part of a set of 12 scrolls called “Picture of the Southern Tour.”

Most of the scroll is rolled up, but what there is to see of it is a rich, visual record showing a well-ordered and harmonious society.

Walking alongside it and viewing its scenes in sequence is an almost cinematic and touching experience.  Imbued with a sense serenity and divine order, it invites the viewer into a world that is vividly captured in minute and colorful detail. There is a crispness and contrast to the colors that is quite different to the works from the previous centuries.

He went on to explain, “When Chinese artists learned painting, their masters would teach them how to be a good person in society first, how to be a scholar, before actually learning the technique. So when you look at a Chinese paining it’s not that only the technique that moves you; it’s the history, the traditional Chinese culture, and the morality behind these paintings that move you.”

Masterpieces of Chinese Painting from the Metropolitan Collection will be on show until October 2016. 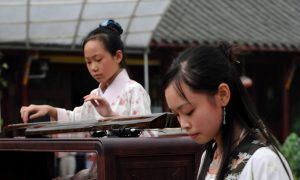 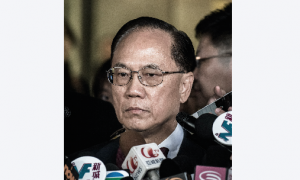 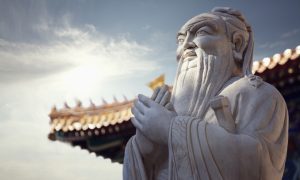