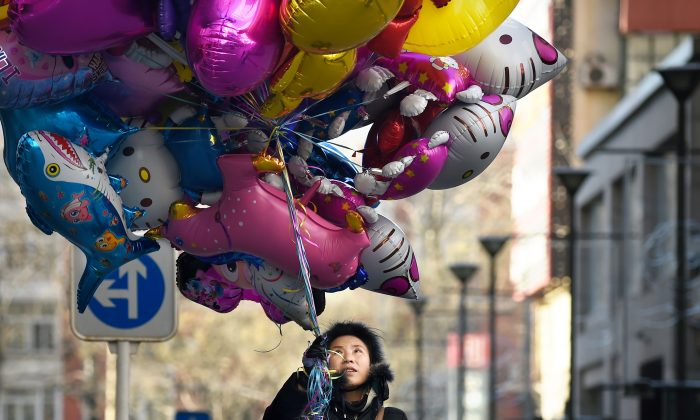 A balloon vendor waits for customers outside a shop in Beijing on Dec. 24, 2014. (Wang Zhao/AFP/Getty Images)
Business & Economy

The beauty about economics is that you can have one number and a myriad of different interpretations.

Take China’s GDP growth for 2015 for example. There is the annual growth rate of 6.9 percent. That one is pretty straightforward. It means that output in the world’s second-largest economy is now 6.9 percent larger than at the end of 2014.

And 6.9 percent is pretty high absolutely speaking, although it is quite a bit lower than the 7.3 percent growth of 2014.

Since GDP is a measure of output, changes in price distort the measure.

Growth was slower from the third quarter of 2015 to the fourth quarter of 2015. It increased 1.6 percent, or 6.4 percent if we pretend we had the same growth for a full year for an easier comparison with the other figures.

Absolutely speaking, all of these figures are pretty high, but compared to recent years, it is pretty clear that growth is slowing down.

But here is the real problem: All those figures are quoted in real terms. This means they are adjusted for inflation. Since GDP is a measure of output, changes in price distort the measure. After all, we want to know what the extra output was and not how much the existing output increased in price. This adjustment is common practice around the world, and the number used to make the adjustment is called the GDP deflator, which is slightly different from the consumer price indexes the media likes to cite.

Under normal circumstances, GDP is adjusted downward to account for positive inflation. So if all the goods and services produced in China are worth 10 percent more over the year (in terms of price and quantity) and inflation was 2 percent, then real growth in output would be 8 percent. This is what happened in China since 2009.

The growth could simply be overstated.

Not this year. The GDP deflator that adjusts output growth was -0.8 percent in the fourth quarter. Because it is negative and describes a decrease in price level, it gets added back onto the value of goods and services produced. We want to know the amount produced compared to last year and not how much the same output of last year is worth according to the lower prices of this year. This process gives us the real comparable value of goods and services produced, which grew at 6.8 percent in the fourth quarter.

Not accounting for these price changes, however, China’s GDP grew only 6 percent over the year. This is the nominal as opposed to the real number.

And here is where it gets really tricky. If we look at the history books, we would be hard-pressed to find any economy growing north of 5 percent that has a negative GDP deflator. Growth in that order of magnitude signals there is a lot of demand for products and services, putting upward pressure on prices because producers need some time to bring new production online to meet the growing demand.

Unless, of course, you are China and you invested so much in production capacity that it’s already there to meet new demand before anybody even knew the demand existed. In this case, there could be growth and falling prices at the same time, although it is very likely the growth will follow the prices down sooner rather than later.

It is also telling that the GDP deflator only turned negative for the second time since the year of 2000 in the first quarter of 2015, the real beginning of the slowdown in the Chinese economy.

However, consumer prices have been rising at around 2 percent for the last four years and gives us market value of goods and services for the consumer market, which represents roughly one-third of the Chinese economy. In fact, many of the products sold wholesale and tracked in the producer price index are sold to consumers in the end.

Most economists who follow the intricacies between nominal and real GDP think that inflation is between 1 and 2 percent higher and therefore growth should be 1 to 2 percent lower. In the fourth quarter’s case, a GDP deflator of plus 1 percent would mean real growth of only 5 percent (6 percent nominal minus 1 percent inflation). A much more realistic representation of Chinese growth.