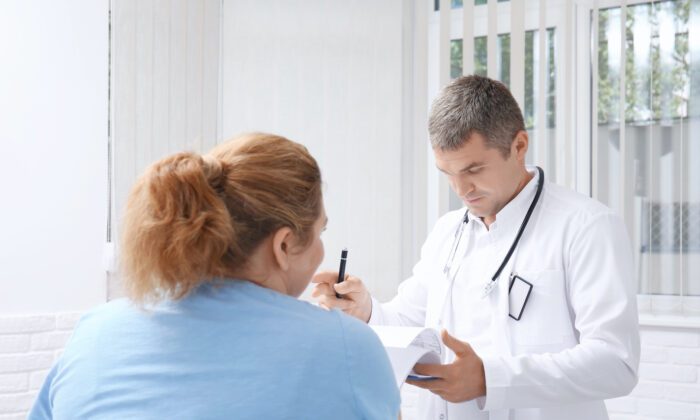 Unlike the people that carry extra weight, the virus that causes COVID-19 thrives when we have a larger waist line. Now scientists understand why.(Africa Studio/Shutterstock)
Health

Jennifer Margulis
Jennifer Margulis, Ph.D., is an award-winning journalist and author of “Your Baby, Your Way: Taking Charge of Your Pregnancy, Childbirth, and Parenting Decisions for a Happier, Healthier Family.” A Fulbright awardee and mother of four, she has worked on a child survival campaign in West Africa, advocated for an end to child slavery in Pakistan on prime-time TV in France, and taught post-colonial literature to non-traditional students in inner-city Atlanta. Learn more about her at JenniferMargulis.net
View profile
Follow
and Nicole Johnson

At first, Angelle Mosley of New Orleans didn’t think she had COVID-19. But she texted her mom that she wasn’t feeling well on a Thursday and went to the hospital to get tested, just in case, according to WDSU News.

Though initially Mosley was treated and sent home, she spiked a high fever, was having difficulty breathing, and ended up back in the hospital over the weekend. She tragically died on July 25, just three days after her COVID-19 test came back positive. Mosley was just 33 years old and fully vaccinated.

What happened? Why did such a young woman succumb to such a severe case of COVID-19? The owner of a clothing store catering to plus-size women, Brave Beautique, Mosley also was obese. Her untimely death may be explained by new research on the relationship between COVID and obesity.

According to the World Health Organization, obesity is on the rise worldwide, in both adults and in children. From 1975 to 2016, the global prevalence of obese and overweight young people jumped to 18 percent from 4 percent. The WHO estimates that 1.9 billion adults were overweight in 2016, 650 million of whom would be classified as obese. Nearly 40 percent of American adults are obese.

People who are overweight or obese have an excessive amount of fat accumulation. Some argue that BMI is a simplistic rubric that doesn’t take into account individual muscle mass or body size but a person who has a body mass index over 25 is considered overweight, and obese if that index is 30 or higher. (The National Institutes of Health has an online BMI calculator, as does the Centers for Disease Control and Prevention (CDC), if you’re curious about yours.)

According to Harvard School of Public Health, obesity can take a toll on nearly every aspect of your health, from fertility to back pain to proper lung functioning and respiratory health. Being obese increases your risk of arthritis, cardiovascular disease, certain cancers, diabetes, and even mood disorders. Several studies have shown an association between obesity and depression, especially for women. But of the many negative health conditions associated with obesity, an increased risk of succumbing to deadly or debilitating disease is perhaps the most worrisome.

We now know that there are several risk factors that make COVID-19 infections more severe for some people. According to the Mayo Clinic, people at risk for severe COVID include older adults (more than 81 percent of deaths from COVID-19 happen in people over 65), patients with heart and lung conditions, people with weakened immune systems, diabetics, and those who are battling obesity.

Given the negative health outcomes associated with obesity, it’s perhaps not surprising that being overweight or obese appears to put people at higher risk of having a severe infection or even dying from COVID-19.

In March 2021, a CDC study discovered that approximately 78 percent of people hospitalized for COVID were overweight or obese. A team of nine scientists examined the health records of 148,494 adults and found that people right at the threshold of a healthy weight had the lowest risk of severe COVID-19, while people with higher BMIs were at increased risk. Of especial concern was the risk of obese people under 65 years of age being hospitalized, put on a ventilator, and dying from COVID.

“These results highlight the need to promote and support a healthy BMI,” the CDC scientists wrote, “which might be especially important for populations disproportionately affected by obesity, particularly Hispanic or Latino and non-Hispanic Black adults, and persons from low-income households, which are populations who have a higher prevalence of obesity and are more likely to have worse outcomes from COVID-19 compared with other populations.”

New research from an international team of scientists may provide insight into why obesity is associated with more severe COVID-19 infections. These scientists used fat tissue from bariatric surgeries and tried to infect it with COVID-19. They also examined fat tissue from people who had died of COVID-19. They discovered that SARS-CoV-2 infected fat cells, known as adipocytes, and triggered a heavy-duty immune response in the tissue that sent inflammation skyrocketing.

In addition to infecting adipose tissue, macrophages—which are immune cells housed within the fat tissue—also became infected and provoked an intense inflammatory response.

As Dr. David Kass, a professor of cardiology at Johns Hopkins, explained to a reporter from The New York Times, it appears that the additional fat provides a place for the virus to “hang out,” replicate, and wreak havoc on the immune system.

Fat tissue is full of immune cells. In someone who is lean, this tissue secretes anti-inflammatory and protective factors. However, in someone who is obese, fat tissue can become unhealthy and dysfunctional, secreting chemicals signals that promote inflammation. That seems to be what is happening when obese people come down with COVID-19.

While not yet peer-reviewed, these findings, released in October 2021, suggest that the body’s fat reserves may become a reservoir for SARS-CoV-2 and actually provoke immune cells into a hyper-inflammatory state.

If this new research proves to be correct, reducing obesity in the United States and worldwide would be a major step forward in lessening the likelihood of death or severe illness, from SARS-CoV-2 or other infectious agents.

Ironically, however, some of the measures to combat the spread of COVID-19—including closing schools and imposing lockdowns—may actually be contributing to the problem of obesity. In November 2021, the National Child Measurement Programme released data showing that obesity in England has soared among children during COVID-19 stay-at-home orders. The American Psychological Association and others have noted increased weight gain in the United States due to disordered eating that spiked during the pandemic. This widely acknowledged weight gain has even received its own moniker based on the “freshman 15″—the “COVID 19.”

In order to combat obesity effectively, we need to understand and address the underlying causes. Unhealthy eating, genetics, a past history of sexual abuse, and mental health issues are all associated with obesity. The rise of processed foods, which include highly refined carbohydrates, added sugars, and seed oils also have had a profound impact on our waistlines and overall health.

But some scientists believe a less acknowledged factor is also having a significant effect—environmental toxins. One of these culprits, according to a Massachusetts Institute of Technology senior research scientist, may be the herbicide glyphosate, the main ingredient in Roundup. Stephanie Seneff believes that glyphosate is directly contributing to poor outcomes from COVID-19.

“The relationship between obesity and increased risk to COVID-19 is complex and tied to many metabolic, vascular, and immune impairments associated with obesity,” Seneff, the author of “Toxic Legacy: How the Weedkiller Glyphosate is Destroying Our Health and The Planet,” explained via email. “But we know that glyphosate causes obesity, so obesity is a strong indicator of glyphosate poisoning.”

“All of the factors that push humans into autoimmunity, including repeated exposure to aluminum, an established immunotoxin, likely cause both autoimmunity and metabolic syndrome leading to obesity and severe COVID-19,” he said.

Hormone-disrupting chemicals, such as glyphosate and aluminum, are well known to compromise healthy immunity. Both Seneff and Lyons-Weiler suggest that reducing our exposure to environmental toxicants—in our water, food, personal hygiene products, medicines, and vaccines—may be a key strategy to successfully fighting COVID-19 and other infections.

Nicole Johnson contributed reporting to this article. Jennifer Margulis, Ph.D., is an investigative health journalist and book author. She has worked on a child survival campaign in Niger, West Africa; championed the rights of Christian children sold into child slavery in Southeast Asia on prime-time TV in Paris; and taught post-colonial literature to non-traditional students in Atlanta. Sign up for her free weekly emails and learn more at JenniferMargulis.net.