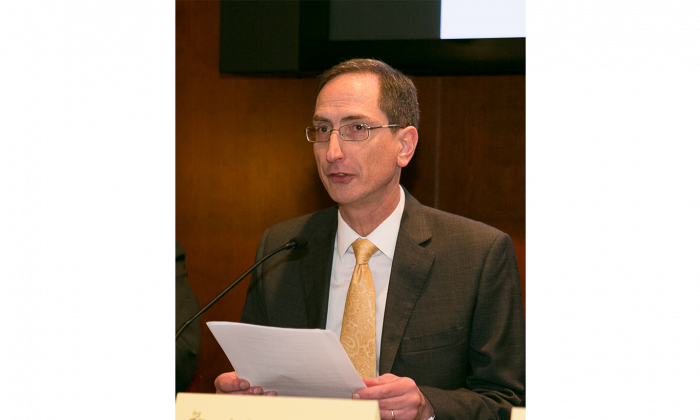 The ‘Nine Commentaries’ Shows the Path to China’s Future

Remarks at the 2014 Nine Commentaries Forum at the U.S. Capitol Visitor's Center

What didn’t those Soviet experts in 1991 know that perhaps China experts today also do not know?

Thanks to the publication whose 10th anniversary we are celebrating, today’s China experts have on hand a document that describes and explains China’s past, present, and future like no other document does.

The “Nine Commentaries” has been published in Chinese and translated into English, German, French, Spanish, Russian, Korean, Japanese—in all, it appears in a total of 31 languages.

I would like to take a moment to mention some common misconceptions about China and communism that are exposed in the “Nine Commentaries.”

Misconception 1: “China isn’t really communist any more, it’s gradually and peacefully transforming into something else.”

The Party began and still exists as a means of seizing all power in China and controlling people. It still uses violence, terror, thievery, and deceit to maintain its power at all costs—even at the costs of the lives of its members and its leaders. Eighty million unnatural deaths under communist rule is a number too large for the mind to comprehend, but it is a stark testament to the true values of the Party.

Can the CCP transform into something benign? If we study history, if we read the “Nine Commentaries,” we can see that it is not possible. The CCP is an organism, a beast that will consume all in its path in order to survive. Its basic nature cannot be transformed into something benign, much less beneficial, by capitalism or any other ideology or thoughts.

Misconception 2: “Things are getting better, the Party is loosening up, there is more freedom.”

Anything the Party does to “loosen up” is a temporary tactical move to relieve pressure on itself. Things have periodically become looser, then tighter, in the various movements, including the persecution of intellectuals, the Great Leap Forward, and the Cultural Revolution. The fundamental aim is to maintain power without accountability to the people.

A rising number of incidents of unrest these days among laborers, farmers, pensioners, and other desperate groups show underlying strains of the communist system.

Occasionally some journalists and political prisoners are released to great fanfare, but simultaneously and quietly 10 times as many other proponents of freedom are being thrown in prison. The aim of loosening up economically is to gain more for the Party treasury and to enrich individual Party officials.

The “Nine Commentaries” explores the past that many Chinese people today forgot—or rather, the past that Chinese people were intentionally not taught. Traditional culture and traditional values made China strong, prosperous, and harmonious for most of its history. We’re talking about values like honesty, loyalty, kindness, courage, and filial piety. Through controlling the education system and the media, the CCP has instilled the idea that the past was bad and backward.

Americans need to understand that the CCP is quietly waging war on the United States through spying, so-called soft power, and hacking. The CCP is preparing to have the world’s most dominant military apparatus by 2020 in order to wage loud war, if necessary.

The CCP feels threatened by what America represents. America, with all its faults, shows the world that freedom and democracy can exist in a vibrant, powerful nation. Our values in the West support human dignity, individual rights and freedoms.

This scares the CCP because it knows that its own people will want those freedoms, if they can see that freedom works. In this sense, America represents a primal threat to the survival of the CCP. The CCP cannot afford for Chinese people to see what may be the scenario when the CCP’s heavy hand is no longer pressing down.

The CCP destroys some of its own people as a matter of strategy, and it pollutes the air, water, and soil. There are hundreds of cancer villages in China, where large percentages of the people get cancer. The soil has become toxic in many places in China from heavy metal contamination and other pollution. The water in many places in China is undrinkable.

Look at a satellite photo of the earth and one sees a dark cloud of air pollution spreading out from China. That dark cloud could be a metaphor for the CCP itself. In order to survive, it needs to spread out. It can’t allow our Western democratic system to remain. And with the dark cloud of the CCP comes decay of morality, a pollution in the spiritual realm that matches the extraordinary dirtying of the physical realm.

The CCP’s values of corruption, cheating, and thievery lead to subpar products being exported, and not only subpar, but poisonous products. Baby food, pet food, and toothpaste exported from China have all been found to be dangerous.

Here let me pause for a moment and say something on behalf of all Epoch Times staff, in all languages and all countries: We are obviously against the CCP—but we are not against China. In fact, we love China, and we want the nation of China and the people of China to flourish.

The CCP would have people believe that the Party and China are one and the same, but we want to tell you that the CCP is not China. The CCP has instilled the fear of what could happen in China if the Party is gone, but it is only the Party that should be afraid—the Chinese people and we in the West have nothing to fear, we have only brightness and healing to look forward to after the CCP vanishes.

The “Nine Commentaries” shows the path to separating the Party from the country. The path is to revive the traditional values of Chinese culture, such as those taught by Falun Gong: truthfulness, compassion, and tolerance. Despite the violence, torture, and genocidal force applied by Jiang Zemin and the CCP, Falun Gong practitioners have endured peacefully for more than 15 years. They serve as a beacon for Chinese people, and indeed they even serve the people by showing them the nobility and indestructability of traditional values.

As of today, more than 185 million people have withdrawn from the Party, in response to the publication of the “Nine Commentaries on the Communist Party.” This represents a powerful tide of hearts changing, of turning away from the Party and turning toward the bright future after the Party is gone.

I would explain one point about the withdrawal movement, called “tuidang” in Chinese. The CCP was reported to have only approximately 60 million members some years ago—so the question arises: How can 185 million withdraw? The answer is that many more tens of millions of Chinese people joined, and were often coerced to join, the Young Pioneers or the Communist Youth League. Most of these never obtained full Party membership, but they are still in the grip of the CCP. So the tuidang movement counts all these people who have announced to the world that they throw off the dark yoke of the Party.

As I represent Epoch Times here today, it is my privilege to tell you that all Epoch Times staff globally are proud to be part of the organization that has published this important work, which is based on extensive research and the uncovering of facts that were previously hidden.

We believe that one cannot truly understand China today without having read the “Nine Commentaries on the Communist Party.” Whether you want to do business in China; whether you have an academic interest in China; whether you are in one of the branches or agencies of government; or whether you simply have indirect contact with China—and all of us do through imported clothing, electronics, food products, and other goods—you will have your eyes opened by this book. We also believe that you may attain a deeper understanding of human nature, human history, and yourself after reading this book.

What will China do when the Communist Party is history? It’s important to realize that the Chinese people have survived for 5,000 years as a coherent civilization. Dynasties have risen and fallen, and order was restored with each new dynasty. The Tang Dynasty ruled for nearly 300 years, but the Communist Party has been in control of China for less than seven decades. Traditional Chinese culture will return, and the resourcefulness and ingenuity of the Chinese people will restore China to its past glory when the Party is history.

John Nania is editor-in-chief of the Epoch Times English-language editions. He delivered this speech on Dec. 3 at the U.S. Capitol Visitor’s Center.