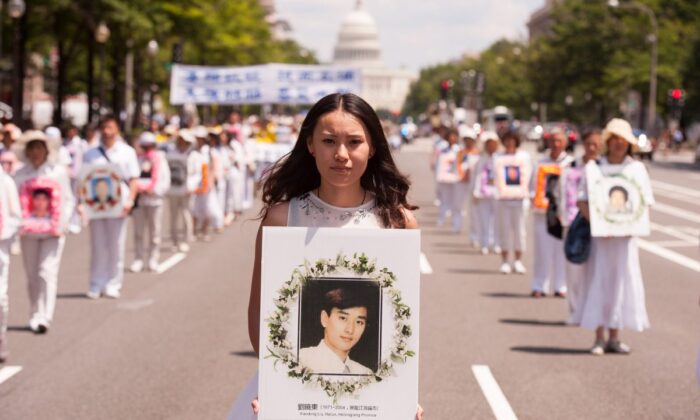 A woman holds a photo of a man killed by the Chinese regime in its persecution of Falun Gong, during a parade in Washington on July 17, 2014. (Larry Dye/The Epoch Times)
Viewpoints 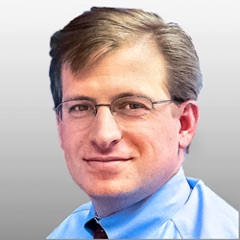 On the front page of the Oct. 25 New York Times was an article titled “How an Obscure Newspaper …” The paper sought to attack The Epoch Times, in part by attacking the religious beliefs of some of its founders, who are Chinese Americans who practice Falun Gong.

As the executive director of the Falun Dafa Information Center, I would like to respond to this attack against Falun Gong.

The article raises serious concerns about the NY Times’ reporting on Falun Gong. Specifically, this article propagates false narratives and inaccuracies about the Buddhist-based spiritual practice, as well as a striking trivialization of the nature and scale of human rights abuses faced by people who practice Falun Gong in China.

Falun Gong, also known as Falun Dafa, involves practicing meditative exercises and living according to teachings based on the principles of truthfulness, compassion, and tolerance. In 1999, the Chinese Communist Party (CCP) launched a brutal persecution of this peaceful practice, fearing that 70 million to 100 million Chinese people had adopted a belief whose teachings provided an alternative to the Party’s dogmatic materialism and atheism.

At a time when millions of innocent Falun Gong believers in China—who have no connection with the U.S. media and political landscape—continue to face abduction, torture, and extrajudicial killing at the hands of the CCP, these problems constitute a gross negligence, or perhaps even mal-intent, on the part of the NY Times.

Indeed, the mistakes made in this article signal a bizarre and troubling downturn of what was once a pillar of American journalism.

Sadly, the problematic reporting in this article isn’t an anomaly. Rather, it comes in the context of a 20-year-long, near complete silence by the NY Times on terrible human rights abuses in China against ordinary Chinese who practice Falun Gong, despite reporting on other persecuted religious groups in China and elsewhere.

This depiction couldn’t be further from the truth.

Freedom House estimates 7 million to 20 million people in China continue to practice Falun Gong today. Not only has the Falun Dafa Information Center documented and reported on thousands of illegal abductions, long sentences, torture, and deaths in custody during 2020 alone, but Chinese government websites indicate a new campaign to “zero out” Falun Gong in towns and villages across the country.

And just as importantly, it isn’t Falun Gong sources alone that have documented the extreme violence meted out to peaceful believers in China. For 20 years, millions of people have been harassed, detained, imprisoned, tortured, or killed by Chinese authorities, a fact that has been regularly documented in annual reports by the United Nations, Amnesty International, Freedom House, and the U.S. State Department, among others.

Here are a few brief examples:

In 2016, the U.S. House of Representatives unanimously passed House Resolution 343, “expressing concern regarding persistent and credible reports of systematic, state-sanctioned organ harvesting” from Falun Gong practitioners in “large numbers.” The text of the resolution noted that “in many detention facilities and labor camps, Falun Gong prisoners of conscience comprise the majority of the population, and have been said to receive the longest sentences and the worst treatment.”

A 2017 Freedom House report that included a comprehensive chapter on Falun Gong found that despite the CCP’s 17-year campaign to eradicate the group, millions continued to practice. It noted that “Falun Gong practitioners across China are subject to widespread surveillance, arbitrary detention, imprisonment, and torture, and they are at a high risk of extrajudicial execution.”

On the topic of organ harvesting, the reality of Falun Gong practitioners being killed for their organs in China is now widely accepted among human rights organizations, policy makers, and academic circles.

In 2019, Sir Geoffrey Nice QC, a former prosecutor at the International Criminal Tribunal for the former Yugoslavia, who led the prosecution of Slobodan Milosevic, convened the China Tribunal, an independent tribunal of medical, legal, and China experts in London. After assessing all the evidence, the panel concluded that Falun Gong practitioners were and continue to be killed for their organs “on a significant scale.” This story was covered by the BBC, Forbes, The Guardian, Newsweek, The Telegraph, The Wall Street Journal, and NBC.

The New York Times failed to report on this story.

In the face of such extensive documentation by human rights organizations, democratic governments in the West, the United Nations, and many of other media outlets, why would the NY Times characterize the entirety of the evidence as “the group … accuses”? Furthermore, this story comes on the heels of 20 years of near complete silence on the plight of Falun Gong.

I myself, a Falun Gong practitioner, am married to a woman of a different race, and we have two lovely mixed-race boys. Clearly, this idea that Falun Gong “forbids interracial marriage” has no basis in reality.

Then, where does this lie come from? In recent years, Chinese Embassy websites throughout the West have started to use this phrase to demonize Falun Gong in their English-language propaganda because they know it will be triggering in the West.

By including this falsehood in the article, the NY Times demonstrates that it either failed to conduct even a basic level of fact-checking, or worse, knowingly included it to strengthen the narrative of the story.

There were more subtle, yet no less misleading, statements made in this NY Times article as well.

When characterizing some of his sources, the author indicates that they spoke anonymously because they “feared retaliation … [from] Falun Gong.” The article presents no evidence or credence for this “fear,” but its connotation of violence is the polar opposite of the peaceful nature of the practice, and the manner in which Falun Gong believers conduct themselves.

Furthermore, there is an abundance of notable figures who have actually come to know the Falun Gong community well and can testify that such a sentiment is groundless.

Professor Arthur Waldron, Lauder professor of international relations in the Department of History at the University of Pennsylvania, has said Falun Gong “are outstanding people by any standard: intelligent, well-educated, hard-working, moral in their behavior, courageous.”

In fact, for more than 20 years, millions of people across China have faced terrible violence and oppression, and there’s not a single known case of a Falun Gong practitioner raising their hand in retaliation against their oppressor.

By contrast, in a recent case reported by the Falun Dafa Information Center, a Falun Gong practitioner came to the aid of his sister who was the victim of domestic violence. Instead of arresting the abuser, the Chinese police detained the protector and sentenced him to seven years in prison because of his faith.

But again, none of this context is included, and readers are left to consider Falun Gong as a group prone to “retaliation”—a notion that is highly misleading, at best.

20 Years of Near Silence, Obfuscation

All this begs the question: Why has the NY Times, by and large, ignored the horrific human rights abuses meted out against people who practice Falun Gong in China for the past 20 years? And when it does cover Falun Gong, why is the reporting riddled with falsehoods and glaring omissions?

Perhaps it has something to do with the meeting between NY Times publisher Arthur Sulzberger Jr. and then-CCP leader Jiang Zemin (who single-handedly started the persecution of Falun Gong) back in 2001? After this meeting, there was no meaningful reportage about the Falun Gong persecution for the next 20 years (with one notable exception: the work of Andrew Jacobs).

What is clear from one of NY Times’ own is that this approach toward Falun Gong may be very intentional, even mandated. While giving testimony to the China Tribunal, former NY Times Beijing correspondent Didi Kirsten Tatlow suggested that not only was forced organ harvesting from prisoners of conscience such as Falun Gong taking place in China, and that it was an open secret among transplant surgeons, but that the NY Times had actively discouraged her from reporting on this fact.

The NY Times has been a consistent presence on the kitchen table in my household for three generations. In recent years, however, we have become increasingly alarmed as the perspectives injected into its news, as well as those omitted from it, veer dangerously off course from news that’s “fit to print” and tacks strangely close to a narrative that would certainly please Beijing.

We implore the NY Times to remove whatever policies, influences, or biases are currently in place that are preventing fair and accurate reporting on Falun Gong, and get the story, the whole story, right. As millions across China who practice Falun Gong remain vulnerable to wrongful imprisonment, torture, and killing, doing so could literally save lives.