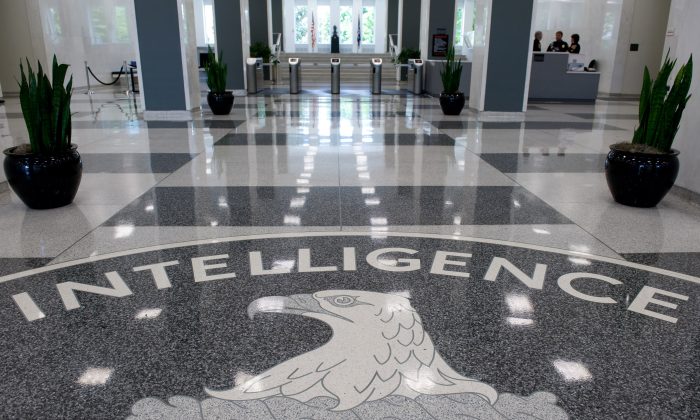 File photo of lobby of Central Intelligence Agency Headquarters in Langley, Virginia, on Aug. 14, 2008. New information about a breach of CIA intelligence networks by Iran in 2009 is being mostly ignored by mainstream media. (Saul Loeb/AFP/Getty Images)
Viewpoints

In May of last year, it was suddenly revealed for the first time that from 2010 to 2013, the Chinese regime was able to learn the identity of every single CIA agent in that country.

As a result, more than 30 undercover intelligence assets were arrested and imprisoned, and many of them were executed.

The New York Times first hinted at this explosive story in May 2017, when it published an article under the headline “Killing CIA Informants, China Crippled U.S. Spying Operations.”

The NY Times story included this section to demonstrate how serious that intelligence setback was:

“From the final weeks of 2010 through the end of 2012, according to former American officials, the Chinese killed at least a dozen of the C.I.A.’s sources. According to three of the officials, one was shot in front of his colleagues in the courtyard of a government building—a message to others who might have been working for the C.I.A. Still others were put in jail. All told, the Chinese killed or imprisoned 18 to 20 of the C.I.A.’s sources in China, according to two former senior American officials, effectively unraveling a network that had taken years to build.”

Foreign Policy expanded on that devastating news more than a year later, in an article on Aug. 15 titled “Botched CIA Communications System Helped Blow Cover of Chinese Agents.” The article was by reporter Zach Dorfman.

On Nov. 2, Yahoo News published an article by Dorfman and Jenna McLaughlin titled “The CIA’s Communications Suffered a Catastrophic Compromise. It Started in Iran.” That dropped the bombshell that Iran also was tipped off to the identities of most, if not all, of the CIA’s assets there, and that breach actually occurred earlier than the one in China.

So, it wasn’t just China rolling up the CIA’s entire network in that country because of what’s described as “a massive communications breach.” Now, all of a sudden, it’s being revealed that during the same time period, Iran also was dismantling the CIA network of agents and assets there.

A stunning admission appears near the beginning of the Yahoo News piece:

“From around 2009 to 2013, the U.S. intelligence community experienced crippling intelligence failures related to the secret internet-based communications system, a key means for remote messaging between CIA officers and their sources on the ground worldwide. The previously unreported global problem originated in Iran and spiderwebbed to other countries, and was left unrepaired—despite warnings about what was happening—until more than two dozen sources died in China in 2011 and 2012 as a result, according to 11 former intelligence and national security officials.”

Did anything suddenly change starting in about 2009 or so that could explain a massive communications security breach that led to our intelligence networks being entirely rolled up in not just one, but two countries? I can think of two things: (1) Barack Obama took office as president, and (2) Hillary Clinton became secretary of state.

As is now well-known, there were stunning violations of security protocols at the State Department while Clinton was in charge there, due to the illegal homebrew server she insisted on operating outside of protected secure government channels. And this was all covered up and minimized to enable her planned run for the presidency in 2016.

I suspect that many people inside the Obama administration, embedded within law enforcement and intelligence agencies, helped orchestrate her ability to walk away from what should have been a career-ending scandal.

Take note that every single one of the 11 anonymous sources for the Yahoo News story is described as a “former intelligence and national security official[s].”

Mike Pompeo was a busy guy during the year he spent in charge of the CIA, because I suspect he had to clean house. That would explain why most of the people leaking to the media for the past year about this massive national-security scandal are “former“ intelligence/national security officials.

Imagine what a talking point it would have been if people knew that, at the time Obama and former Secretary of State John Kerry were trying to get the Iran deal done, Iran was imprisoning and executing the CIA agents that blew the whistle on the mullahs hiding their nuke facilities.

How did the Iranians know that we knew they were hiding underground nuclear facilities? Simple: The Obama administration told them. As the Yahoo News article states:

“One of the largest intelligence failures of the past decade started in Iran in 2009, when the Obama administration announced the discovery of a secret Iranian underground enrichment facility—part of Iran’s headlong drive for nuclear weapons. Angered about the breach, the Iranians went on a mole hunt, looking for foreign spies, said one former senior intelligence official.”

So why is the information that reveals it wasn’t just the Chinese but also the Iranians breaching our intelligence networks back in 2009 being put out there now?

I’m thinking that someone got wind that this Iran angle was about to come out anyway, and they decided to release the information by leaking to a friendly news outlet that would present the startling new information in a way that allowed it to be downplayed and minimized.

So Yahoo News gets the damning new information on Iran out to the public, but does it in a way that presents it as secondary information in a story about how our intelligence networks were compromised across the board. When coupled with the already known Chinese scandal, the focus is diffused instead of centered on the new Iranian news.

The Yahoo News article is damage control; the fact the mainstream news media hasn’t focused attention on the Iranian revelation in the three days since it appeared confirms that. This is stunning new information in light of the Obama administration’s actions on the Iran deal, and yet the media is practically ignoring it.

The late Andrew Breitbart called this “the controlled explosion” strategy. You know some highly damaging information can’t be stopped from becoming public, so what do you do? You find a friendly news outlet that will let you get ahead of the revelation by dropping the news yourself, only you massage and spin it so that it’s not as damaging.

This incredible scandal is being presented through these anonymous leaks to the NY Times, Foreign Policy, and Yahoo News in such a way that no one person is responsible. It’s rolled out as an “institutional failure” to avoid any individual accountability.

We’ll see. As I noted, I don’t think it’s an accident that, thus far, every single source for these news stories is no longer employed at any intelligence or national security agency.