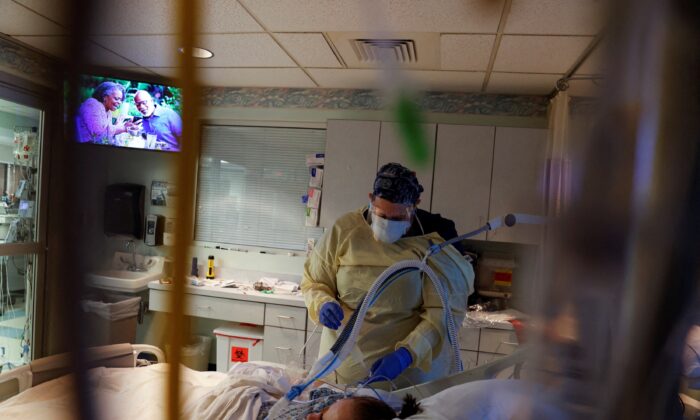 It almost seems sacrilegious to compare what’s going on today with COVID-19 with the “Underground Railway” that freed many of our fellow humans from the unconscionable condition of slavery. But our fellow humans are dying now in serious numbers, whether actually from COVID-19 or not.

A great percentage of mortalities are happening inside the hospitals, the very bastions of our medical system, where patients are only allowed to have the care the government decrees, which often has the most negative result.

This has given rise to a modern underground that’s doing many things, including getting people forbidden medications that actually save them, and even liberating the patients from the hospitals by methods some of which will only be hinted at here.

This movement has developed its own Harriet Tubmans of all colors who are popping up in different parts of the country.

One of the more prominent is A.J. DePriest who has appeared recently on “The Highwire with Del Bigtree” discussing her analysis of why the treatment of the pandemic has turned into the travesty that it has. (Hint: Follow the money.)

I sat down with A.J. near our homes in Middle Tennesse to interview her on another matter—the nuts and bolts of what’s she’s doing on the ground to help people.

What follows has some redactions to allow courageous individuals who prefer not to be identified to keep their jobs and for brevity.

I asked her first to describe generally what she was doing.

A.J. DePriest: We have two organizations: the TN Liberty Network, a small think tank, and the Adam Group that has a website, TheAdamGroup.net. On that website, we have information about how to prevent COVID, which everyone should know, because it is preventable. And we have information about how to treat COVID at home with the help of primary care physicians. And because people also don’t know that you can treat COVID at home very well, even if you have comorbidities. And with the help of a primary care doctor, which we will help you find, you don’t have to go into a hospital, which involves the third part of the Adam Group, which is the advocacy network we have across the state, and now in a couple of other states, to not only help people get out of hospitals who’ve been medically kidnapped, and to help families get in to COVID patients who have been isolated.

Roger Simon: We’re familiar with the protocols at The Epoch Times and have interviewed Drs. McCullough, Malone, and others deeply involved with the issue. But medically kidnapped? We have never had an interview with anybody who is playing, let’s say, the Harriet Tubman role of our time. Let’s start with how you determine who is in a hospital illegitimately or shouldn’t be there.

DePriest: The family usually contacts us either through our website or through word of mouth now, mostly, and they let us know that someone they love, family member, friend, is in the hospital, that they have not been allowed to see them. They’ve had phone calls and videos saying they want to leave, but the hospital won’t let them, although they are able to. And so the family calls us for how.

Simon: What do you do next?

DePriest: Well, if they’re not on a ventilator, it makes it a lot easier. Because, you know, some people are really, by the time they get on a ventilator, it’s almost too late for us to help. But usually they’re not on a ventilator. They’re usually in either the COVID ICU, or in the COVID unit of just the regular part of the hospital. And the first thing we do is we look up the hospital visitation policy. And since Tennessee isn’t under a state of emergency anymore, there’s no reason why hospitals can’t abide by their pre-COVID hospital visitation rules. But they’ve been excluding the family, violating their own visitation policy, which is usually on their website. So that’s the first thing we do. And then we print out that and the order from Governor Lee that stated when the state of emergency ended. Then we track down their patient bill of rights from their website and we go over with the family and instruct them about how their rights have been violated. And we tell them how to go to the hospital and put together a meeting with the risk manager, even the CEO if necessary, the charge nurse, nurse supervisor, the patient’s doctors, and just confront them and say, “Here is your patient bill of rights. Here are the rights that you’ve violated. Here is your patient visitation policy. Here is the release from the state of emergency. I’m going in now to see my family. Do you need me to wear a mask? Do you need me to take a COVID test to prove that I’m okay?”

Simon: Are you with the family at this point?

DePriest: So far, they haven’t needed me personally to be there. But if they need it, we have advocates all over the state now.

Simon: I imagine that could be the case. Many people are not used to confronting authority, particularly medical authority.

DePriest: I know. Before COVID who ever questioned going to the hospital or firing your doctor in a hospital? I mean, it was just unheard of for you to even question the medical authority. But now you have to, because there is one protocol used in the hospital. And that protocol will kill you. If you don’t question it.

Simon: I wrote a column for Epoch Times recently, “Do You Trust Your Doctor Anymore?” In the comments, no one said yes. So getting back—suppose this doesn’t work? What happens next?

DePriest: A couple of things. If the family has a power of attorney, that’s very helpful. So everyone, before they go into a hospital should assign their power of attorney or their designated advocate. And that person can then call the county sheriff, and seek help that way. Now, we have had great success in some counties in Tennessee, with the county sheriff helping families get in to to see their loved ones. And it’s not, you know, it’s not “Gunsmoke,” guns blazing, you know, comes in and takes over. It’s not like that. The sheriff and the deputies are very pleasant. They go in and they talk to the ICU doctors, or the ER staff. And they just explain that they’re violating this person’s constitutional rights, and it’s worked.

Simon: Are there other methods you use?

DePriest: We’ve had luck with threatening to file complaints with the Joint Commission, the Joint Government Operations Committee, and the Centers for Medicaid and Medicare [Services], because they don’t want complaints. But other times people have called me and they’ve had loved ones in the hospital and they said, you know he’s, he’s still in the emergency room. They won’t let us in. They won’t let him out. And I just tell them, get three or four of your big friends, go in and get him out. And they have, and they’ve had the hospital people screaming at them.

Simon: Tell us some of the stories of how you work with doctors and nurses and others who prefer to remain anonymous in this situation to preserve their jobs.

DePriest: When all of this COVID business started, and we started helping people either get into hospitals to see family or get out, we’ve found out that having primary care physicians on the outside was very helpful to keeping people out of the hospitals, but also for lining them up to take care of patients that we basically jailbreak from hospitals. They have to go immediately under a doctor’s care to be treated at home.

Simon: How successful have you been?

DePriest: I love saying that for every person who’s contacted us for preventive treatment, and every person who’s contacted us for treatment afterwards, we have a 100 percent survival rate. But if they are in hospitals, and they’re on Remdesivir, and ventilators, they have about an 84 percent chance of death. So I think our winning streak is a little better. When we started looking for doctors to treat these patients we were getting out of hospitals, they needed to be doctors that we knew would prescribe the right medications to actually help people get better.

Simon: What are the basics of the protocol that you’ve been using for at home?

DePriest: The Frontline Doctors’ FLCC protocols. That’s our standard. We also use Dr. Richard Bartlett’s protocols. Dr. Bartlett is the Dallas, Texas, doctor who saved so many people using his protocol that particularly helps with active COVID. And so we use a number of different protocols. But the doctors that we line up for patients, they really decide what the patient should be on that’s best for them. And we don’t interfere with that doctor–patient relationship. We just simply make the introduction, and then the doctors take over care for them.

Simon: As of now, I gather you’re Tennessee centric. But have you expanded beyond our borders here?

DePriest: Yes, since our website has been up, we’ve had phone calls from all over the country, people who need our help. Trying to find advocates in these different states has been hard. But we built a network and now we have a group up in Indiana and another one in Kentucky. There’s one in North Carolina. They all use our website. And they’re building their own advocate networks in these different states. And I know that there are lots of other states who have very similar groups and hear from them all the time. The doctors who contact us or we find, we have to keep them firewall protected. Doctors who even talk about ivermectin and hydroxychloroquine and the FLCC protocols, anyone who doesn’t push the COVID shot, are at risk of having their licenses threatened by the board of examiners in the different states. And I know in Tennessee, we’ve had our Tennessee Board of Medical Examiners threaten doctor’s licenses for going outside of what they tell them to do, think, and say, and they’ve been scolded by our legislature. But they continue to do it. So we just protect our doctors’ privacy and their identities, so that they can treat their patients.