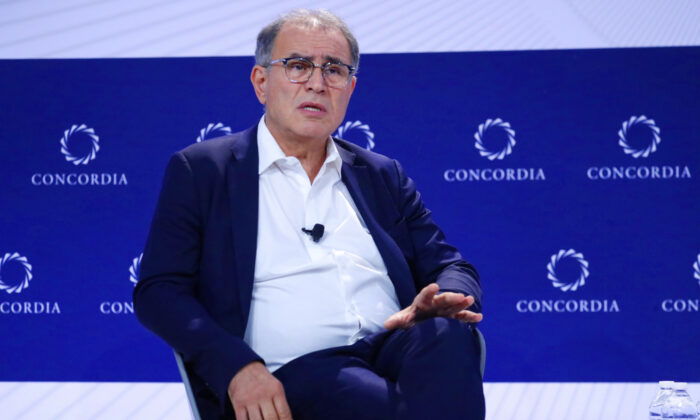 Economist Nouriel Roubini has warned about an impending crisis in the global economy that policymakers likely won’t be able to handle.

Following the explosion of leverage, borrowing, and deficits in recent decades, the world economy is now moving toward an “unprecedented confluence” of financial, debt, and economic crises, Roubini warned in a Dec. 2 article for Project Syndicate. Households, corporations, financial institutions, governments, pension plans, and other entities are now burdened with massive amounts of debt that will only “continue to grow as societies age.”

But with elevated inflation, the “financial Dawn of the Dead” has ended, Roubini observes. As the Federal Reserve raises interest rates to combat inflation, the “zombies” are facing a sharp rise in debt servicing costs. Roubini was a senior adviser to Obama-era Treasury Secretary Timothy Geithner.

Since January, the Fed has pushed up its benchmark interest rate to a range of 3.75 percent to 4 percent from a range of zero to 0.25 percent.

“For many, this represents a triple whammy, because inflation is also eroding real household income and reducing the value of household assets, such as homes and stocks,” the economist wrote.

“The same goes for fragile and over-leveraged corporations, financial institutions, and governments: they face sharply rising borrowing costs, falling incomes and revenues, and declining asset values all at the same time.”

These developments are happening amidst the return of stagflation, a situation of weak economic growth and high inflation. Unlike the 2008 financial crisis and the COVID-19 crisis, bailing out private and public entities will only end up pouring “more gasoline on the inflationary fire.”

This means that there will be a “deep, protracted recession” on top of an intense financial crisis. “The mother of all economic crises looms, and there will be little that policymakers can do about it,” Roubini warns.

A similar negative prediction for the U.S. economy was also made by Harvard professor Larry Summers in a recent interview with Bloomberg.

Summers, who also served as Treasury secretary under Obama, pointed out that it will become much harder to bring inflation down without a recession because, at a certain point, consumers will run out of their savings, which will reduce consumption. This means that the economic downturn will be “fairly forceful.”

“When the unemployment rate in the United States rises by half a percentage point, it ultimately rises by more than 2 points,” Summers said. “And that’s because once you get into a negative situation, there’s an avalanche aspect. And I think we have a real risk that that’s going to happen at some point.”