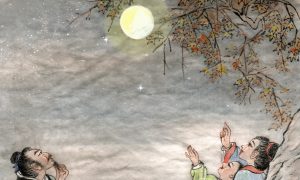 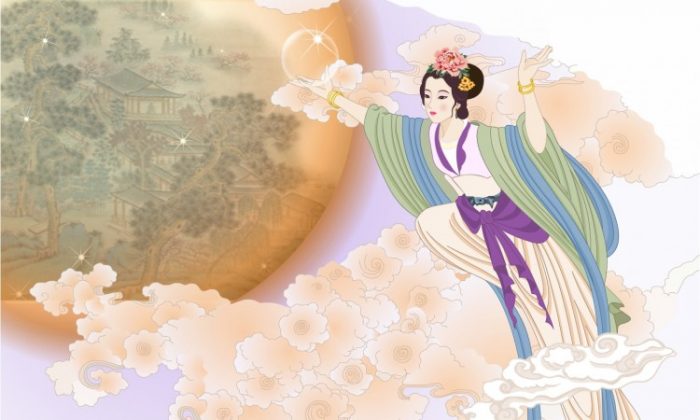 The Moon Festival and the Lady of the Moon

The Moon Festival, also called the Mid-Autumn Festival in China, is one of the major traditional holidays celebrated by Chinese people. It is always on the 15th day of the 8th month each year according to the Chinese lunar calendar. This year, it falls on Sept. 19.

The festival was first introduced as an official holiday at the beginning of the Tang Dynasty and became widely celebrated in the Song Dynasty. By the Qing Dynasty, it became of equal importance as the New Year’s (Yuan Dan).

Like every other traditional Chinese festival, the Moon Festival’s origins come from a story passed on from generation to generation and it is always related to the moon lady Chang’e.

According to a Chinese legend, there was a time when 10 suns hung in the sky, baking the earth dry, and depriving the people of water and life. A hero named Hou Yi climbed to the top of Kunlun Mountain and shot down 9 of the 10 suns with his bow and arrows, thus saving the people on Earth.

One day, Hou Yi encountered the Lady Queen Mother and received the elixir of immortality from her. The elixir, when taken, would allow one to become an immortal and live in the heavens. Hou Yi gave the elixir to his wife, Chang’e, for safekeeping.

A neighbor learned of the elixir of immortality and tried to forcefully take it from Chang’e while Hou Yi was away. In a moment of desperation, Chang’e swallowed the potion and immediately became a Goddess and flew into the sky. Because she still cared so much for her husband, she landed on the place closest to Earth, the moon.

When Hou Yi returned and found his wife gone, he was devastated. As he looked up to the sky to call out her name, he saw that the moon that night was especially bright and full and he caught a glimpse of Chang’e.

He immediately brought out Chang’e’s favorite cakes to pray for blessings from Heaven. Since then, it became a tradition for people to worship Heaven and celebrate with moon cakes on that day. Thus, the Moon Festival became well-known among the Chinese.

There were once many things that the Chinese did to celebrate the Moon Festival. However, other than that many people purchase and eat moon cakes (round cakes filled with sugar, sesame, and other spices), most traditions are now forgotten.

On the night of the Moon Festival, my grandmother quietly slipped out of our room to go somewhere. I was curious to see what she was doing, so I tried to tag along. My grandmother quickly waved me away and told me to go play.

Unsatisfied, I still followed her, out of sight, to the backyard of our house. I saw that she had laid out dishes of fruit and moon cakes on a platter, and then she proceeded to light incense and kneel down to pray. I watched her for a moment, and then quickly left.

Later, I would learn that my grandmother was praying to the Heaven and the Earth. The Moon Festival was not only about worshiping the Moon Goddess, but also about showing appreciation for Heaven and Earth. On this day, families gather together and celebrate the holiday in unity.

Fruits and moon cakes must be laid out for the Earth God and the Moon Goddess, and people should also share moon cakes together. Traditionally, the moon cakes are cut into many pieces, one piece for each member of the family. If a family member is not present, a slice must be reserved for them.

This is a memory of Chinese culture to be cherished!