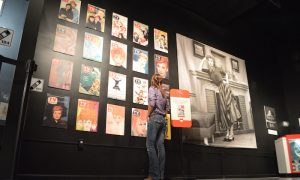 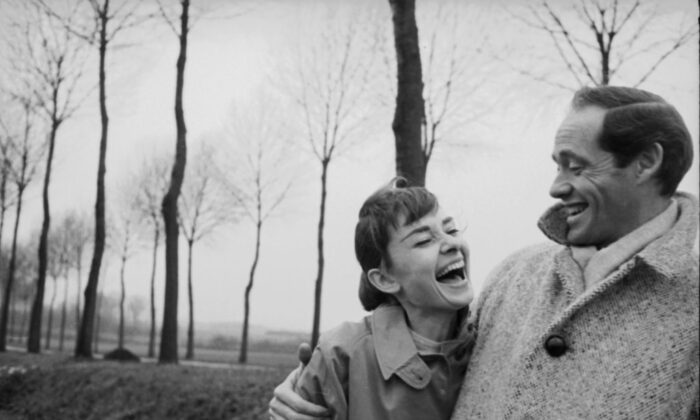 Actress Audrey Hepburn (1929-1993) was a big proponent of laughing, saying, " It cures a multitude of ills." Above, Hepburn with her husband, actor Mel Ferrer (1917-2008) on a country road outside Paris, 1956. (Ed Feingersh/Michael Ochs Archives/Getty Images)
Family & Home

The Medicine of Mirth: The Healing Power of Laughter

The pandemic has transformed the entire world into a dark and frightening place, with businesses shut down, untold millions quarantined in their homes, human beings around the globe panicked by the virus and the uncertainties of the present and the future. It is a time of tremendous tension politically and personally, a time when you can smell the fear in the air and see it in the eyes of masked shoppers at the grocery stores. Spring has bestowed on us its warmer temperatures, flowers, and green grass, but the incongruities between nature’s beauty and the pandemic may only sharpen our black spirits and gloomy thoughts.

The Cure for a Multitude of Ills

Another lady remembered by many of us also endured hard times. As a teenager living in the Netherlands under the Nazis during World War II, she aided the Resistance, lost an in-law to execution, watched Jews being trundled away to their deaths, underwent bombardment from the Allies, was reduced along with her family to eating flour made from tulip bulbs, ended the war ill with anemia and malnutrition, and found her family stripped of wealth and status.

Audrey Hepburn, movie star and philanthropist of both her time and money, was accustomed from an early age to suffering. What helped her endure and confront hardship throughout her life? Once she said, “I love people who can make me laugh. I honestly think it’s the thing I like most, to laugh. It cures a multitude of ills. It’s probably the most important thing in a person.”

Right now I suspect most of us could use as much laughter as we can find.

Like some of us who live alone, I have lately spent more time on the phone than normal. Friends and family members bring laughter to me, and I to them, and as we do so, my tension and solitude, at least for a while, leave me. My friend John and I joke back and forth about politics, my friend Anne and I laugh about personal circumstances, my daughter with her bright sense of humor always brings a smile to the conversation, and her 3-year-old son makes me chuckle just by listening to his voice.

The Mayo Clinic reports that laughter can relieve short-term stress, provide long-term health benefits, and may even improve our immune system.

So how do we find occasions for laughter when news of the pandemic brings us so much gloom and doom?

First, we open our eyes to the people and events around us.

Though I infrequently visit Walmart, last week I needed some items I couldn’t get in town. While there, I asked a clerk where I might find paper towels. “Layaway,” she said, and so I proceeded to Layaway, where I found two older gentlemen doling out paper towels and toilet paper. I wanted to burst out laughing—have we really come to this?—but thanked them for the rationing and took some paper towels along with the per-customer limit of 2 four-pack rolls of toilet paper. In a salute to this mega-store, I must add that the charge for those 8 rolls was $1.20, or 15 cents a roll.

At Walmart, I also picked up some games and puzzles for my Pennsylvania grandchildren, whose mother tells me are bored. After packing my purchases in a box, I started to add newspapers to keep everything from rattling around, then thought, “No, toilet paper.” So into the box went four rolls of TP, with me smiling the whole time.

Another example: At our small ABC store—the sales area is maybe 600 square feet and has three aisles of liquor—I entered last week to find a sales clerk directing everyone to follow the arrows glued to the floor. Though I wanted to laugh, I just thanked him and smiled. Was I the only one who found this cautionary overkill humorous?

The Internet offers many sites for jokes and laughter. YouTube, for example, is loaded with comedy and comedians. Have the kids seen Abbott and Costello in “Who’s on First?” Have they watched Lucille Ball and Desi Arnaz in “I Love Lucy?” Online, too, are dozens of short videos—search for “jokes for kids that are really funny,” for example, and you should have the younger crew bursting with laughter. And how about you? Have you watched comedians like Jim Gaffigan, who weaves into his routine all sorts of humorous reflections on his home life?

The Internet also contains dozens of sites sporting jokes for people of all ages. Because of a New Year’s Resolution I made here at The Epoch Times, I committed myself to writing two grandchildren a letter every Sunday. (I’m terrible at keeping resolutions, but going public had a way of forging my willpower.) Every time I send a letter, I put in a few jokes I find online.

The way I figure it, in this time of stress and storm, my grandchildren need to laugh as much as I do.

There are even online sites for “coronavirus jokes.” Here’s one: “Prediction, there will be a baby boom in 9 months, and then one day in 2033, we’ll witness the rise of the ‘Quaranteens.’”

Next up is literature. Our libraries and bookstores may be closed, but we can find many humorous stories and poems online. Google “funny stories,” and up pops an array of tales for audiences ranging from kids to grandparents. The Internet also provides classic stories like O. Henry’s “The Ransom of Red Chief,” James Thurber’s “The Secret Life of Walter Mitty,” P.G. Wodehouse’s tales of Jeeves and Bertie Wooster, and many more.

Poetry, too, can bring smiles. Robert Service’s “The Cremation of Sam McGee,” Lawrence Thayer’s “Casey at the Bat,” and even Gelett Burgess’s “Purple Cow” for the little ones should crack the gloom surrounding us. Search online for “humorous poems,” and up they rise, again in all age categories.

But the most rewarding opportunities for laughter lie with our fellow human beings. This shutdown offers parents and grandparents the chance to share the history of their youth with the young people around them, including the funny stories they remember from their own coming of age. Now is the time to tell the story of when as a 6-year-old you ran away from home and were chased back to your parents by a passel of pigs and piglets escaped from a farm (yes, it happened to me) or when you appeared on a beach as a teen dressed in shorts and long black socks, and brought hoots of laughter from your friends (yep, me again).

Laughter, humor, and comedy bind us together, relieve stress, and bring some sunshine into this dark time. Rafael Sabatini opens his novel “Scaramouche” with these words: “He was born with a gift of laughter and a sense that the world was mad.” Right now the world is as mad as mad can be, and all of us need that gift of laughter.

Here’s a bit that I hope will leave you laughing. If you don’t get the joke, try reading it aloud.

An Englishman, a Frenchman, a Spaniard, and a German were in a crowd watching a juggler. The juggler noticed the four men were having trouble seeing him, so he stood on a large wooden box and asked, “Can you see me now?”
“Yes.”
“Oui.”
“Si.”
“Ja.”