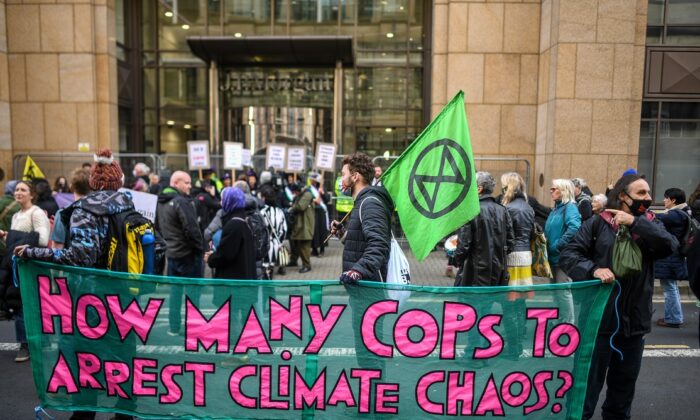 NEWSFLASH, sort of: I saw the photo of Joe Biden falling asleep at the Glasgow climate conference (COP26) that’s been going around the internet and on cable tv, and, for the first time since his election, felt a tiny bit of sympathy for our president.

OK, it’s not a great look for the so-called leader of the free world, but some years back (2009), I attended the Copenhagen version of this conference (COP15), reporting then for PJ Media, and had a helluva time staying awake during the extraordinarily tedious speeches.

I had an equally difficult time staying warm, especially when outside, because that conference on “global warming” took place in a record-breaking blizzard, the likes of which I had never seen, although I was a graduate of Dartmouth College and had spent four years in the snows of New Hampshire.

One time during this event, I found myself waiting endlessly for one of the panel discussions to start, wondering what in the Sam Hill this was really all about and what I was doing there, when, out of boredom, I struck up a conversation with the man next to me.

It turned out he was the representative from the Maldives.

I had struck gold! The Maldives were the very center of controversy then because the rising sea level from warming was said to be about to put their Pacific islands permanently underwater.

Trying to be sympathetic, I told the man I had heard about their plight, but his response was to start laughing.

He explained to my puzzled look there was no threat to his island whatsoever. They had had periodic high tides forever, but nothing that a few sandbags couldn’t handle.

So why was he here? This time he looked at me strangely. How could I possibly not know?

For the money, he said.

Diogenes had found his honest man.

Not so the scads of world leaders, royals, and CEOs showing up on private jets—400 or so, according to the Daily Mail, including Jeff Bezos in his personal $65 million Gulfstream—overflowing Glasgow’s airport while the peons were forced to sleep, unable to reach Scotland, on the floor of London’s Euston Station. (This COP had storms, too.)

All this for “climate” negotiations that obviously could have been done just as easily over Zoom or something similar for the negligible results that emerge.

This time, neither China nor Russia were present, a more than minor omission when it comes to global carbon emissions (excuse me, methane now), to whatever extent you believe in or fear them.

But we’re used to this by now. Hypocrisy great and small has been going on for some years at these annual festivals of virtue signaling.

Years back, Al Gore led the way, making millions—or was it billions—through carbon exchanges that were hurriedly put to bed before the world realized what a scam they were.

But then these are United Nations-run climate change conferences and where the United Nations is involved, corruption often follows. The U.N. Oil-for-Food Programme during the Iraq War was one of the great scandals of recent decades.

Nevertheless, pace H.L. Mencken, climate change conferences aren’t just “about the money.” Something else as well, I believe, is lurking beneath the surface.

I was reminded of this while reading another article by the Danish journalist Bjorn Lomborg who, over the years, has had a lot of interesting, level-headed things to say about climate.

To oversimplify, Lomborg believes some anthropogenic global warming exists but its extent doesn’t merit the “sky is falling” panic and consequent huge expenses advocated (or vaguely promised) by many world leaders. In fact, as is often true in such cases, the very people they claim to be helping are the ones who will be most hurt (i.e., the energy-impoverished developing countries that rely on fossil fuels for survival).

For me, the key might be in that $64 word many of us have learned somewhere during the increasing number of years of this controversy— anthropogenic (man-made). The adherents of dangerous climate change believe man (and woman, but less so) must always be at the center of things. You could call them excessively anthropocentric.

They tend largely to be atheists of one stripe or other. They are atheists even to the extent they don’t give sufficient countenance to that original god of human beings—the sun.

But whatever climate change is man-made, it pales in significance compared to the sun. Someday, we may learn the truth of that to our detriment.

Nevertheless, the most devoted so-called warmists appear to worship Gaia, that stand-in for the Earth, rather than the sun or certainly the Judeo-Christian God. But, in order to encourage worship of whatever faith, it’s a good idea to have someplace to go, to remind the faithful—Jerusalem, Mecca, Lourdes, and so forth. Hence, COP.

That makes these climate conferences essentially annual religious celebrations for atheists, a celebration of the belief that man could control all things. (If that sounds a bit like communism, it is.)

Not all that long ago, people called our current ecological fixation something simpler—conservation. We all agreed with it then and automatically did our part. We picked up the trash. Now, not so much.