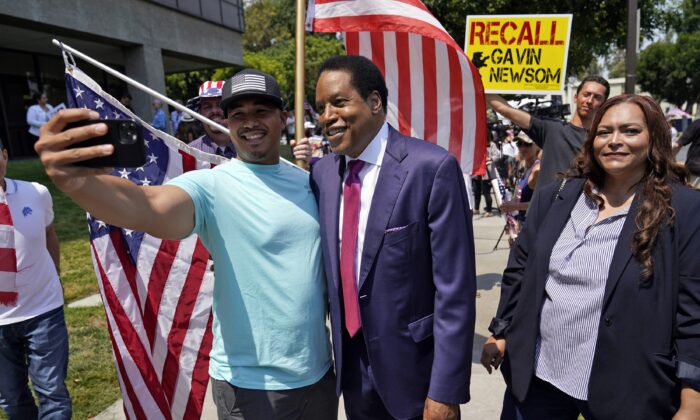 The other day I did something I thought I would never do again—subscribe to the Los Angeles Times.

Although the paper had been kind to me in its book review section (now extinct) over the years, I left the city and state over three years ago and continuing to read yet another rote, liberal newspaper, indeed one that was failing badly—the LAT lost $50 million in 2020 and has been on and off the block for the better part of a decade—had little appeal.

But I am going back to California shortly to cover the gubernatorial recall election for this outlet and I thought the better part of valor would be to see what the state’s biggest newspaper had to say.

(It helped that they were running an online special—$4 for 4 months—hard to resist.)

What I found did not altogether surprise. The paper had devolved from a semi-national standard form liberal publication into something approximating an online anti-Larry Elder blog, so bent are they on the electoral failure of the talk radio show host in the coming recall election. By the way, in case you didn’t know, Elder is a contributor to Epoch TV.

But the degree it had taken to this mission did surprise a bit. At its most extreme it put me in mind of Dante’s famous admonition at the gates of Inferno: “Lasciate ogni speranza voi ch’ entrate.” Abandon hope all ye who enter… if Elder wins.

A quick search yields such recent LAT columns as “If Larry Elder is elected, life will get harder for Black and Latino Californians.”

This actually is the reverse of reality and inadvertently reveals the main reason, among many, for Elder’s candidacy, so I will get back to it shortly.

First, however, I must acknowledge the LAT’s pièce de résistance, published on Aug. 20, that has set up howls across the web and that Elder has, for good reason, declined to comment upon—“Larry Elder is the Black face of white supremacy. You’ve been warned.”

I must here say “thank you” for the “warning” to its author, LAT columnist Erika D. Smith, because somehow I missed Larry Elder was a “white supremacist” even though I am considerably older than Ms. Smith, went South to join in the civil rights movement the year (1966) after my best grammar school friend Andy Goodman was shot dead by the Klan (“Mississippi Burning”), lost full use of my left hand in the process, went on to become, as a guilty young screenwriter, an early donor to the Black Panther Party (my bad!!!), later, as a member of the Writers Guild’s Board of Directors, led the way for it to help rebuild a library in South Central burned down in the riots and so forth.

But more than enough about me. I am a (lower case only) white man and clearly disqualified from having an opinion about “white supremacy” or virtually anything else, so allow me to give the floor to Ms. Smith from her LA Times column:

“I won’t lie. Few things infuriate me more than watching a Black person use willful blindness and cherry-picked facts to make overly simplistic arguments that whitewash the complex problems that come along with being Black in America.

“And throughout his career—as a radio host, as a talking head for Fox News and now as a gubernatorial candidate—Elder has made a point of doing just that, usually with a lot of taunting and toddler-like name-calling of his ideological enemies in the process.

“Like a lot of Black people, though, I’ve learned that it’s often best just to ignore people like Elder. People who are—as my dad used to say—skin folk, but not necessarily kin folk.

“That’s certainly how many of L.A.’s Black and politically powerful have tried to deal with him over the years. As The Times once wrote of Rep. Maxine Waters’ refusal to be a guest on Elder’s radio talk show: ‘Why should she boost the ratings of a man who ridicules her by mixing a recording of a barking dog over her sound bites?’

“But with polls showing that nearly half of likely voters support recalling Newsom and that Elder is in the lead to replace him, ignoring the self-proclaimed Sage from South-Central is no longer a viable strategy. Particularly for Black people.

‘He is a danger, a clear and present danger,’ said Melina Abdullah, cofounder of Black Lives Matter Los Angeles.’”

And that’s only the beginning. Ms. Smith goes on from there at considerable length.

Beneath this tirade, however, is an unshakable belief in something we have all been hearing about incessantly called “systemic racism.”

I used to think this was merely propaganda for that self-destructive desire to preserve victim status forever. But last night, watching cable news, I came to the realization that a “system” really does exist, though not in the way Ms. Smith imagines or fits with her convenient, basically tribalist (all that talk of “skin folk”), world view.

I was watching video of the ritzy fundraiser given by Nancy Pelosi in the Napa Valley. There, what the NY Post called “hordes” of partygoer/donors (I have no way of knowing the exact count, but a lot), almost all of them certainly at least millionaires given the steep cost of entry, all that I could see white, all maskless, were being served close to the best food and wine in the world by “the help” (i.e., minorities in masks).

What Ms. Smith misses here, and to a great extent also most of the reporters and editors at the Los Angeles Times, not to mention the Sacramento Bee, the CAL Matters Editorial Board, and most of the rest of the self-replicating California media claque, is that they are being mocked by these people.

Journalists are the lower classes to Pelosi’s crowd, essentially in their employ. The salaries of LAT journalists—probably the best in the state for print—are available online and fall in the $100k range, the very number that makes it difficult to live a decent middle-class life in California now and has inspired so many to leave the state, their first population outflow ever.

They—and the rest of the populace—are indeed victims of a “system” that runs like this: The very rich—with Silicon Valley moguls at the top of the whole world—essentially buy Papal indulgences by mouthing off with progressive rhetoric as much as possible and donating to their ultra-rich colleagues in the Democratic Party leadership like Pelosi and Newsom to keep the system in place.

Meanwhile the very rich get richer and richer, beyond the level of anything that has happened in all human history.

At the same time, the California middle class basically disappears and the poor are given breadcrumbs so they don’t complain. They are left to deal with San Francisco turned into a sewer, a wretched public school system preaching Critical Race Theory to seven-year-olds (consider how troubled and confused the schools are, telling the state’s many and growing mixed-race children that race, above all, determines their identity and future—talk about child abuse), decayed infrastructure, endless forest fires, the highest taxes in the country (save New York), and once-gorgeous beaches strewn with syringes.

And along comes Larry Elder to throw a monkey wrench in this moribund “system.” Everyone should.

What’s pathetic is the journalists at the Los Angeles Times and elsewhere don’t see this, or if they do, don’t care. (Just watch their editorial staff’s almost comically biased video interview of Elder, if you don’t believe me.) They would prefer the continuation of the Newsom regime, because, well, pace “Fiddler on the Roof,” TRA-DI-SHUN!

Nevertheless, South Central hasn’t changed in fifty years and nobody—other than Elder and a few others—has complained much (certainly not their Representative Waters who lives in cushy Hancock Park) or, more importantly, dared to challenge the conventional Democratic Party handouts approach that goes on and on, oblivious to that definition of insanity attributed to Einstein: “Insanity is doing the same thing over and over and expecting different results.”

As Larry Elder has noted since he began talking on radio in the nineties, the Democratic Party, through its near-constant promulgation of single-parent friendly welfare programs as the solution to inner city woes, has changed the family-oriented black community and—let’s hope it’s inadvertently—incentivized black women to forego husbands in favor of marrying the state.

The result has been the drastic rise in fatherless (now 75 percent, originally 25 percent) homes in the black community, yielding an almost inexorable concurrent growth in poverty and crime.

This is why the aforementioned LAT column—“If Larry Elder is elected, life will get harder for Black and Latino Californians”—is nonsensical.

I will close with yet more from Ms. Smith:

“It’s that — perhaps out of spite or perhaps out of an insatiable need for attention — Elder opposes every single public policy idea that’s supported by Black people to help Black people. This has been true for decades, but it’s particularly problematic given the racial reckoning following the murder of George Floyd.”

It’s clear she’s no Einstein. But who is?