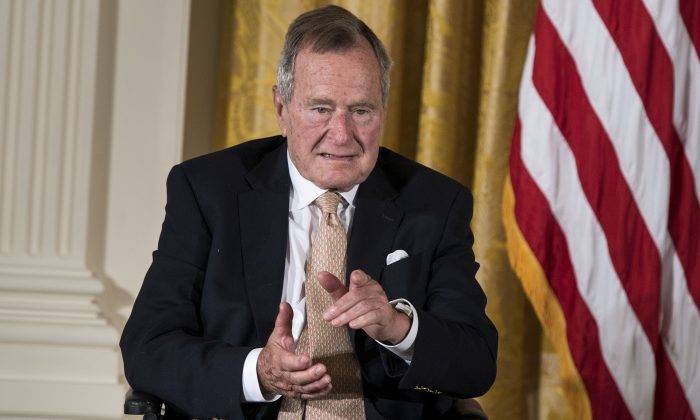 Former US President George H. W. Bush during an event in the East Room of the White House on July 15, 2013. (BRENDAN SMIALOWSKI/AFP/Getty Images)
Politics

Kathleen Kennedy Townsend, the daughter of Robert Kennedy and former Lieutenant Governor of Massachusetts, said that George H.W. Bush, 92, is planning to vote for Democrat Hillary Clinton in the coming election.

While it has been known for months that the Bush family—including president George W. Bush, and Governor Jeb Bush—have been reluctant to support Republican presidential nominee Donald Trump, this is the first time it has been suggested that George H.W. Bush, the 41st president, is voting for Clinton.

In a subsequent interview with Politico, Townsend said she met the former President in Maine and reiterated his preference for the Democratic candidate saying: “That’s what he said.”

A spokesperson for the Bush family, Jim McGrath, did not confirm or deny the claim.

“The vote President Bush will cast as a private citizen in some 50 days will be just that: a private vote cast in some 50 days,” McGrath said to CNN. “He is not commenting on the presidential race in the interim.”

Since Jeb Bush suspended his bid for president during the Republican primaries in February, the Bush family has been mostly silent on their endorsements in the presidential race.

Trump to Meet With Egyptian President

However, several senior advisors from both Bush administrations have announced their endorsement of Clinton—such as former national security adviser Brent Scowcroft, former Commerce Secretary Carlos Gutierrez, and adviser Paul Wolfowitz have stated their support for Clinton.

Jeb Bush, while not announcing his support, has made it clear who he won’t be voting for.

“American voters have made it clear that Washington is broken, but I’m not optimistic that either of the leading candidates for President will put us on a better course,” Jeb wrote in a Facebook post in May.

He went on to state that the Republican candidate didn’t display the “temperament” nor “strength of character” to lead the country. He also said that Clinton was an “untrustworthy liberal politician” that would continue President Barack Obama’s policies.

“In November, I will not vote for Donald Trump or Hillary Clinton,” he added, “but I will support principled conservatives at the state and federal levels, just as I have done my entire life.”

The Bush family, a long staple in the Republican establishment, opted not to attend the Republican convention in July, and have generally stayed on the sidelines when they’ve campaigned for the GOP candidates like John McCain (R-Arz.) and Mitt Romney (R-Mass.).