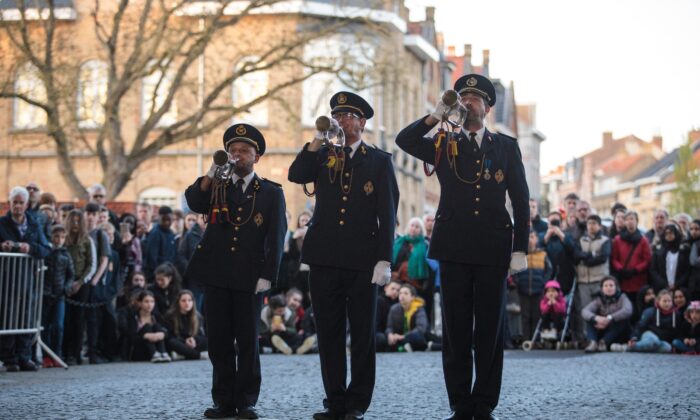 Military band members play the Last Post at the Menin Gate Memorial to the Missing as visitors watch, in Ypres, Belgium, on April 6, 2017, during a ceremony marking the 100th anniversary of the Battle of Vimy Ridge. (Jack Taylor/Getty Images)
Viewpoints

At 8:00 every night, the Last Post sounds at the Menin Gate Memorial to the Missing in Ypres, Belgium, and has without interruption since July 2, 1928. Except during the German occupation. But as soon as it ended in 1944, the ceremony resumed.

Sooner, actually. On Sept. 6, 1944, Polish forces liberated that monument to British and Commonwealth soldiers from the World War I Ypres Salient who have no known grave, and with fighting still raging elsewhere in the town a bugler appeared, unbidden, to resume the commemoration.

On it has gone, for what is now somewhat disconcertingly 77 unbroken years. And even when COVID regulations forbade the crowds from gathering, for it is not just a bugler, or official wreath-layers every single night, but people from near and far, they came anyway, kept their social distance, and kept their vigil.

When I had the chance to attend in 2014, while filming my documentary “The Great War Remembered” for Sun News Network, I was astounded and profoundly moved to see such a crowd, on a night of no special significance, and learn that they were there every night, long after anyone who had fought in the war was gone and even those who had known them were fast dwindling. And I am today astounded, and profoundly moved, to reflect that the Second World War is fast passing into that sort of history where the First has long resided now.

It is fitting that Poles should have liberated the Gate, for liberty has been defended by vast numbers of people under a vast range of circumstances. But they are gone now too. Brave and lusty young men who escaped the wreck of their homeland at the hands of Hitler and Stalin to fight on foreign soil, if they survived the war, went on to mature, to age, and then to dust. Their children are now old, even dead of old age, their grandchildren greying fast. D-Day was 77 years ago? How can it be?

To me, the years are both long and short. As a historian by descent as well as training, I was crushed as a child by the death of Edmund Ironside. Still am. In 1016, in case you’re not up on the twilight of Anglo-Saxon England. And to me the Battle of Bosworth Field is still a thing, the Tudor usurpation still an outrage.

I realize not everyone chuckles at the beeline Henry I made for the royal treasury at Winchester in 1100 while his brother William II’s corpse was still in mid-air from his tragic “hunting accident.” But what of Stephen Langton brandishing Henry’s coronation oath at Bad King John? The siege of Rochester Castle? Or Waterloo?

All “ancient history,” I suppose. But long before age wearied those who survived World War I and the years consumed, those who served in Crimea were old or gone. Mind you, the last survivor of the one great World War I clash of Dreadnoughts at Jutland in 1916, Henry Allingham, only died in 2009 at age 113, the last Royal Naval Air Service man to join the “white company.” And the last veteran of the Napoleonic Wars apparently outlived the Boer War.

These outliers underline the continuity of history, the long chain of battles won and lost stretching back from D-Day and Vimy to Trafalgar, the Armada, Badon Hill, Horatius on the bridge, and men who fell before villages that no story names. The torch is passed, generation to generation, and the Last Post sounds for them all.

It sounds for battles lost as well as won. And spare a thought each November 11 for those brave and dedicated soldiers who deserved a better cause than they fought for, from the Highlanders at Culloden to the Confederates in Pickett’s charge to, indeed, the last Napoleonic veteran, a Pole who fought for the wrong side.

Some doubtless were bad men too. But not every Allied soldier was a saint. And surely, we must pray for those who went astray at least as hard as those whose cemeteries are rightly places of pilgrimage.

Having done so, we must then heed anew the dead “In Flanders Fields,” which is anything but a pacifist poem:

“Take up our quarrel with the foe:/ To you from failing hands we throw/ The torch; be yours to hold it high./ If ye break faith with us who die/ We shall not sleep, though poppies grow/ In Flanders fields.” Nor shall a great many others with no known or remembered grave.

Thus sounds the Last Post, at Menin Gate, in Ottawa, and wherever people cherish freedom.