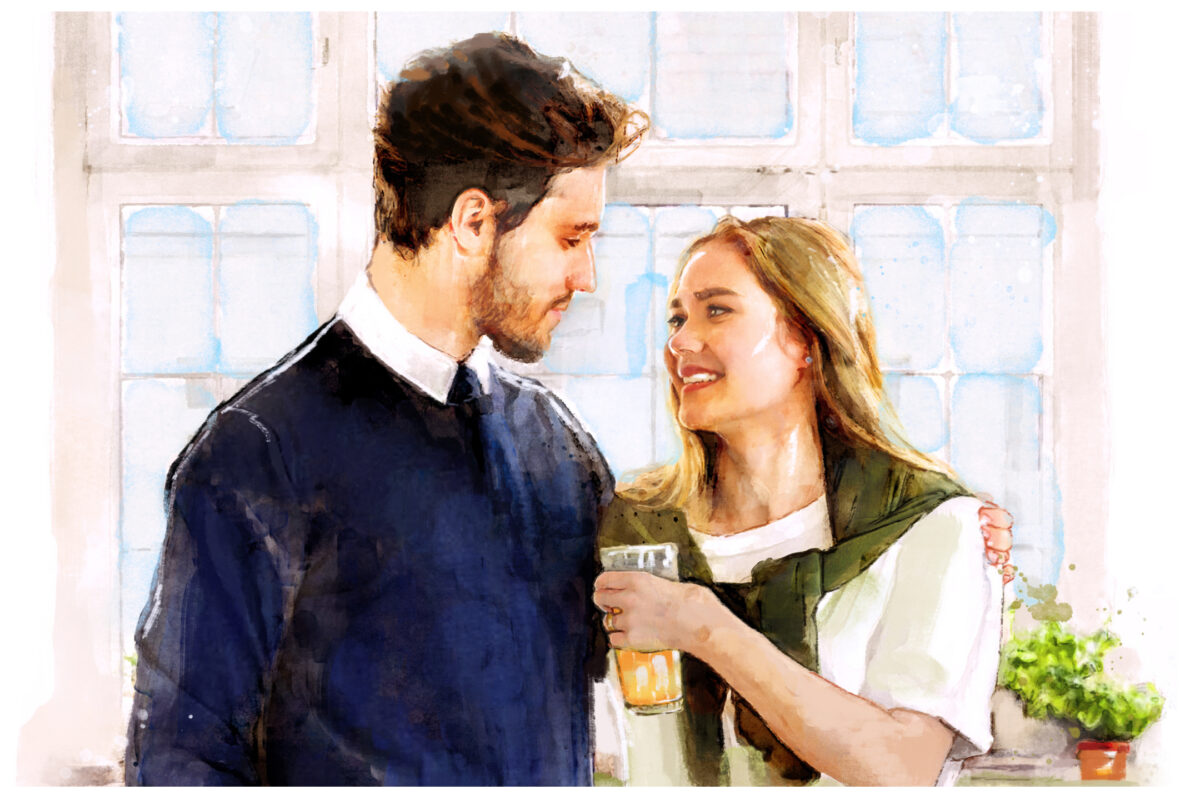 The importance of treating a spouse with dignity and consideration is stressed by marriage manuals, pastors, and counselors alike. (Biba Kayewich)
Family & Education

Respect is a big-tent word, especially when it comes to marriage.

Under that canvas are other words like patience, honesty, listening, and civility.

Most of us show respect to our children, neighbors and friends, and supervisors and employees, but our partners sometimes find this due regard missing in action. Not good. As most couples whose marriages have survived decades of storms and trials often advise, respect is a vital ingredient for a successful marriage.

Marriage manuals old and new, online sites about successful marriages, and pastors and counselors all stress the importance of treating a spouse with dignity and consideration. A husband should ask, for example, about his wife’s day at work and really listen to her answer. A wife should do the same. When one of them makes a mistake—whether it’s forgetting to post an important letter or picking up parmesan cheese at the grocery store—rather than responding negatively or blowing up, a good spouse learns to shrug off these peccadillos and move on. It’s all about respect.

Often overlooked or absent altogether in this advice, however, are other important components of respect that undergird the relationship between husband and wife.

Yourself, Marriage, and Your Future Spouse

With the exception of certain young people of faith, “I’m saving myself for marriage” isn’t exactly a byword in our culture. In fact, celebrities like football player Tim Tebow and country singer Carrie Underwood who take a stand for abstinence are seen as unusual, exotic oddities who puzzle the media.

Instead, many of those who hope to someday enter into matrimony look at their 20s as a time to experiment and have some “fun,” while nevertheless desiring a future husband or wife. Some young men and women fiddle around on dating sites “looking for love” without giving a long-term relationship much consideration. For others, sex offers entertainment, physical pleasure, or food for the ego; they give little consideration to the ramifications down the road. They fail to see that when they give themselves away so freely, bit by bit, they’re giving away pieces of their heart as well.

It’s strange when you think about it. Young people spend years on education and training to prepare themselves for a job or a profession, yet receive little in the way of marriage preparation or instruction. The lucky ones grow up in a household with two parents who love each other and so serve as an example of marriage. The rest take their lessons in love and matrimony from romantic movies, advice from friends, and personal experience.

This diminished emphasis placed on matrimony is reflected in the decline in the number of marriages over the past 30 years, with rates in 2020 in particular taking a precipitous drop.

Engendering respect for the institution of marriage, even among adolescents, may well boost the chances for a successful union between husband and wife.

The Things We Carry

No matter what age we become engaged or married, we bring baggage into a relationship.  We’ve all faced personal difficulties, and so has the person we marry: a horrible childhood, trouble with alcohol or drugs, relationships that damaged our ability to trust other people, money messes, divorce.

In an honest relationship, we’ll know about these impediments well before the “big day,” and an ongoing understanding and regard for that history will help husband and wife overcome the obstacles these may create. One woman I know, for example, recently married a man she deeply loves. Both are in their mid-30s, for both it was their first marriage, and they adjusted well to life together after years of living alone. The husband, however, suffers from stress and major anxiety, medical conditions that have twice landed him in a hospital since the honeymoon. Caused by financial issues, his illness has undoubtedly brought some heavy weights to their marriage, but because she was aware of his problems, this woman has valiantly borne up under these difficulties, offering him her constant love and support.

Close friends can create special problems in a marriage. A newlywed may quickly tire of her husband’s best friend showing up without notice every Sunday afternoon for beer and football as he’s done for years. Meanwhile, her husband may have to deal with her best friend, whose snarky comments reveal her jealousy of him and his premier place in her friend’s life.

Working through these obstacles openly and honestly while showing each other proper respect is the mark of a strong union.

So the wife says, “Can my mother come down for the weekend?” Her husband asks, “Why?” The wife says, “Well, she’s been up on the roof for two weeks.”

There are thousands of mother-in-law jokes like this antique, and they may bring a smile, but the truth is that when you wed, you’re marrying not just that person, but a family as well. Most prospective newlyweds receive this advice at one point or another, but how many actually pay attention? How many pause to think, “I’ll be spending Christmas with my wife’s family for the rest of my life,” or “What if they think I’m not good enough for their son?”

In these relationships with family members, respect is vital. Establishing some common sense rules between husband and wife will help maintain cordiality. Avoid complaining to your spouse about her relatives. Treat those same relatives with consideration, even during the rough patches. Be careful with negative comments, even if they seem supportive, when your spouse complains of difficulties involving his parents, siblings, aunts, or uncles. And finally, if the situation becomes truly intolerable, sit down with your wife or husband and devise a plan for handling future unpleasant incidents that will leave your own self-respect intact.

On their big day, a bride and a groom exchange promises—some of them centuries old, others written by the couple themselves. Some are delivered at a church altar, some on a beach or in a historic building or park, and others in the office of a justice of the peace.

Whatever the circumstances, many couples probably pay little attention at the time to the true meaning of the vows they make. After all, they’re promising to love and care for each other, often “until death do us part,” in public, sometimes in front of scores of well-wishers. The couple is nervous, and rightly so, and we can safely guess that most of them are just trying to say or repeat the right words or formula, without focusing at that moment on their meaning.

Yet these promises entail enormous commitments. They’re vows, not some slapdash, halfhearted offering of commitment. We never hear of anyone pledging “to be with you until I change my mind” or “to have and to hold until someone better comes along.”

Respect for marriage can be enhanced, in good and in bad seasons, by returning to those vows from time to time and remembering what they mean. Some couples read them aloud on their anniversary, while some periodically renew their vows informally or in a special ceremony. Respect the vows and you respect your spouse and your marriage.

These extensions of respect in a marriage have a boomerang effect. The man who refuses to react with anger or contempt toward a critical father-in-law may not win his esteem, but his self-control will deepen his wife’s affections. The 22-year-old who is “saving herself for marriage” is in effect honoring the husband she has yet to meet. What they sacrifice in paying respect, even when doing so is difficult or unpleasant, comes back to them in spades.

Love and respect in a marriage are like sunshine and rain in a garden. The roses need both to flourish.