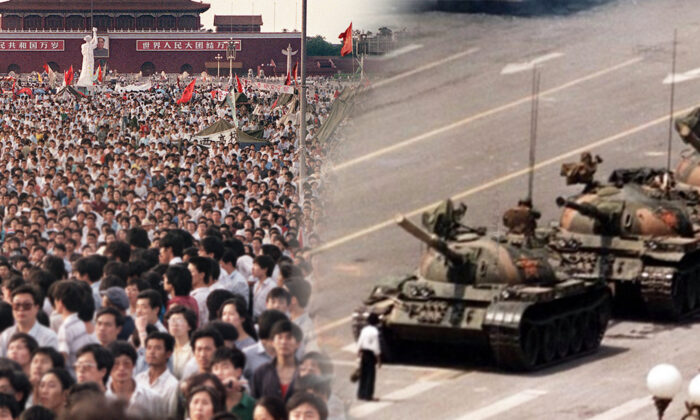 Following the sudden death of a beloved political reformer, Hu Yaobang, 200,000 students gathered at Tiananmen Square on April 22, 1989, to await the hearse carrying Hu’s body—but it never arrived. The mass of students were angered, and their burning desire for freedom could be contained no more.

For the next few weeks, Tiananmen Square was occupied by these student protesters, who aimed at making reality their dream of ridding the country of communist tyranny and bringing democratic reform to China. Their non-violent demonstration perhaps brought a glimmer of hope … until the army moved in. Although martial law was declared on May 20 that year, what caused the army to suddenly go on a killing rampage on June 4?

1. Mass-Murdered by the Chinese Regime

At least 10,454 people were mass-murdered by the Chinese communist regime on Tiananmen Square, according to an unnamed source from the Chinese State Council. The figure is far greater than the “official” fatality count of 200.

On June 4, 1989, students were gunned down in droves and “mown down” by tanks. “APCs (Armored personnel carriers) then ran over bodies time and time again to make ‘pie’ and remains collected by bulldozer. Remains incinerated and then hosed down drains,” reads part of a declassified statement, which was obtained by Alan Donald, Britain’s ambassador to China in 1989.

It’s still unconfirmed how many more were massacred during and after the students’ unarmed protest.

2. The Ringleader Is Still Alive

In addition to rolling over the students with tanks, the army fired high-explosive shells that expand on impact, also known as dum-dum bullets, (forbidden by the Geneva Convention) to kill the students in the most harm-inflicting way possible.

The question remains—what kind of a human being would order such a brutal mass murder of freedom-seeking civilians?

Former paramount leader of the party Deng Xiaoping was impressed with Jiang Zemin’s iron-fisted proposition to use the army to crack down on the students, and promoted him from Party Chief of Shanghai to General Secretary of the Chinese Communist Party days before the massacre, giving him free rein to do as he liked.

Jiang Zemin, the mastermind behind the massacre, ordered the army to carry out his bloody strategy on June 4. The “gate of heavenly peace” was suddenly turned into hell on Earth.

The Tiananmen Square Massacre was just the start of Jiang’s ruthless abuse of power. He went on to commit the most heinous crimes that couldn’t bear the light of day. In the bloody wake of the massacre, Jiang became Deng’s ideal heir for the next Party Chief, a position Jiang secured in 1993.

Jiang, a Marxist hardliner and ex-senior spy for the KGB’s Far-East Bureau, had only begun to show his true colors with how he dealt with the protesting students and went on to orchestrate even bloodier campaigns. In 1999, Jiang sought to “eradicate” Falun Gong—a popular spiritual practice—after the number of people practicing it rose some 100 million, outnumbering the then 70 million Party members, according to state-run reports at the time.

Under Jiang’s rule, an adroit misinformation campaign inundated China, turning public opinion against Falun Gong by subjecting the spiritual practice to extreme vilification—including the infamous Tiananmen Square “self-immolation” hoax, which successfully deceived the nation—paving the way for Jiang’s next phase: to forcibly “transform” or “eliminate” the meditators who refused to give up the practice.

In response to Jiang’s genocidal policy, believed to have caused a widespread yet unascertainable amount of state-approved killings, including forced organ harvesting, over 209,000 lawsuits have since been filed against Jiang, making him the most sued dictator in history.

“An old woman knelt in front of soldiers pleading for students; soldiers killed her,” the Canadian embassy in Beijing reported at the time.

Blacklock’s writes: “A boy was seen trying to escape holding a woman with a 2-year old child in a stroller, and was run over by a tank”; “The tank turned around and mashed them up”; “Soldiers fired machine guns until the ammo ran out.”

An unbelievable amount of bullets were fired on civilians at Tiananmen that “they ricocheted inside nearby houses, killing many residents.”

“The embassy described the killings as ‘savage,’” according to Blacklock’s Reporter.

“They are now entering a period of vicious repression during which denunciations and fear of persecution will terrorize the population,” reads another cable obtained.

Diplomats added that some 1,000 executions took place following the massacre, but an exact figure is unconfirmed. “It was probably thought that the massacre of a few hundreds or thousands would convince the population not to pursue their protests. It seems to be working,” reads a statement by the diplomats.

The secret British cable, obtained by news website HK01, reveals more detail about the crimes of the 27 Army of Shanxi Province on the day.

“27 Army ordered to spare no one and shot wounded SMR soldiers. Four wounded girl students begged for their lives but were bayoneted. A 3-year-old girl was injured but her mother was shot as she went to her aid as were six others who tried.”

Despite Hong Kong lighting up every evening on June 4 in an annual candlelight vigil to commemorate the victims of the massacre, Chinese mainlanders across the border are without such freedom of speech. Talking about the Tiananmen Square Massacre, or even mentioning “June 4,” or “6.4,” could have one disappear.

In 2007, Zhang Zhongshun, a lecturer from Yantai University, showed his class a video of the massacre he obtained from an overseas website. He was subsequently jailed for three years by Laishan City Court on Feb. 28, 2008.

“I imagined that the worst case would just be that the university president would criticize me in front of my colleagues in a meeting. I would not have thought that the communist regime would imprison me,” Zhang told The Epoch Times in an interview after his release from the detention.

Who’d dare raise this for discussion in China knowing the consequences? This year marks the 31st anniversary of the Tiananmen Square Massacre. Will the current Chinese leaders redress the issue and bring Jiang Zemin to justice for his litany of crimes? Only time will tell.