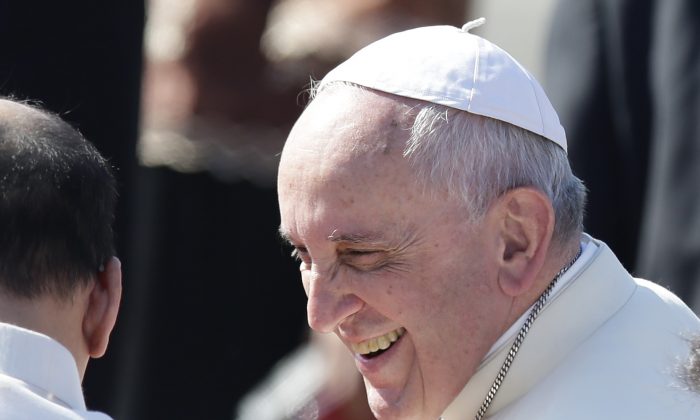 Pope Francis smiles as he chats with Philippine President Benigno Aquino III to board his Philippine Airlines chartered plane following a pastoral visit to Manila and typhoon-ravaged Tacloban city Monday, Jan. 19, 2015. Pope Francis flew out of this Catholic bastion in Asia on Monday after a weeklong trip that included a visit to Sri Lanka and drew what Filipino officials says was a record crowd of 6 million faithful in a Manila park where he celebrated Mass. (AP Photo/Bullit Marquez)
Europe

ISIS is posing a very real and tangible threat to Pope Francis, a Vatican security official has said.

The Islamic State in Iraq and Syria, ISIS, released a video several weeks ago, showing the alleged beheadings of 21 Coptic Christians in Libya. Toward the end of the video, a masked militant makes a threat against Rome, Italy and its Christians.

“The threat exists,” Vatican security chief, Domenico Giani, told Polizia Moderna, a state-run publication in Italy. “At the moment, I can say that we know of no plan for an attack against the Vatican or the Holy Father,” he added.

He noted there’s a “constantly high” level of attention directed at the Pope, and he said ISIS isn’t the only threat. “Lone wolves” and “mentally disturbed” individuals pose a big threat as well, he said.

Does the threat affect the daily work of the Pontiff?

“We are the ones who have to adjust to him, and not vice versa,” Giani added. “We have to do everything we can so he can continue to carry out his ministry as he wants and believes he should.”

Last week, the Italian government went on high alert following the ISIS threats, which called Italy “the nation signed with the blood of the cross.” Four months ago, an ISIS magazine ran a cover photo that showed the terrorist group’s flag hanging over St. Peter’s Square in the Vatican with the text: “The failed crusade.”

Francis has had to deal with security concerns in the past, namely when he was the Buenos Aires archbishop, at the time known as Cardinal Jorge Mario Bergoglio. The government asked him in 2009 to wear a bulletproof vest in response to anonymous reports saying a union leader was planning his assassination, according to CruxNow.

He only wore the bulletproof vest once.

Regarding the safety of Christians who visit one of Pope Francis’s events, “I worry about it, truly,” Giani said, who also noted there’s not enough police officers who safeguard the Vatican. Currently, there are only 130.

“Given the risks that we face, there should be more of us,” he said, according to CruxNow. He pointed to budget constraints and the Vatican’s austerity plan.