The Inevitable Coming Recession and How to Prepare for It 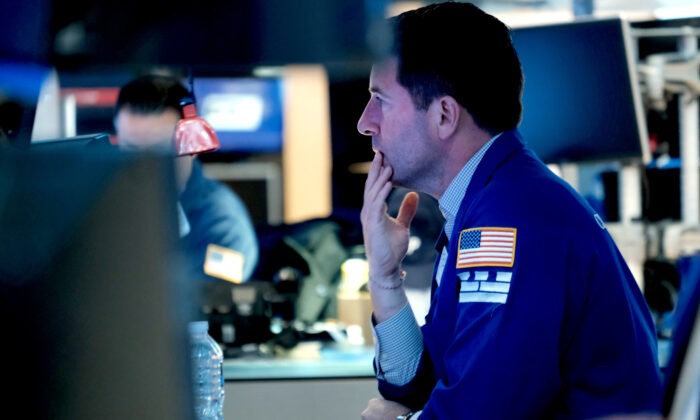 Former Goldman Sachs CEO Lloyd Blankfein added to recession talk after telling CBS on May 15 that an economic downturn is “a very, very high risk factor.”

It isn’t only Blankfein warning about a GDP contraction. Many Wall Street analysts are increasingly becoming worried that a recession could turn into the base case for forecasts over the next 12 to 24 months.

A recent Bloomberg monthly survey of economists found that the probability of a recession over the next 12 months is 30 percent, the highest in two years. This is double the odds economists had anticipated in February.

Morgan Stanley projects (pdf) a 27 percent chance of a recession in the next 12 months, up from 5 percent in March.

“It now appears that inflation is broadening out and has the potential to stay higher for longer,” Morgan Stanley Wealth Management’s chief investment officer Lisa Shalett wrote in her weekly note. “This is a scenario that places upward pressure on longer-run inflation expectations and keeps the Fed in a policy acceleration mode.”

Federal Reserve Bank of Minneapolis President Neel Kashkari told a town hall event in Michigan on May 17 that it’s unclear if the central bank will need to trigger a recession to bring inflation down.

“My colleagues and I are going to do what we need to do to bring the economy back into balance,” he said. “What a lot of economists are scratching their heads and wondering about is: If we really have to bring demand down to get inflation in check, is that going to put the economy into recession? And we don’t know.”

This comes after former Fed Chair Ben Bernanke acknowledged that the central bank moved too late to tackle inflation, telling The New York Times that the United States could slip into a period of stagflation.

Most CEOs are also bracing for a recession, according to a recent Conference Board Measure of CEO Confidence. The gauge dipped into negative territory, tumbling in the second quarter to 42, down from 57 in the first quarter.

While CEOs believe the Fed’s quantitative tightening will help combat inflation over the next few years, they are worried that the central bank’s efforts will induce a recession.

“CEO confidence weakened further in the second quarter, as executives contended with rising prices and supply chain challenges, which the war in Ukraine and renewed COVID restrictions in China exacerbated,” Dana M. Peterson, chief economist of The Conference Board wrote in a statement. “Expectations for future conditions were also bleak, with 60 percent of executives anticipating the economy will worsen over the next six months—a marked rise from the 23 percent who held that view last quarter.”

ING isn’t predicting a recession this year, “but it could be a close-run thing in 2023,” James Knightley, the bank’s chief international economist, wrote in a note.

Greg McBride, senior vice president and chief financial analyst at Bankrate, doesn’t believe there are signs of a recession right now because labor trends and consumer spending are strong.

“Even the Q1 GDP wasn’t a sign of recession as the contraction was due to the trade deficit (imports rise in a strong economy) and inventory adjustment (fluctuating due to persistent supply chain issues),” McBride told The Epoch Times. “The worries of recession are more about 2023, or even 2024, not 2022.”

Sankar Sharma, a market strategist, echoed this sentiment, telling The Epoch Times that recession signs aren’t prevalent today, but they could start forming in 2023 or 2024.

“We are in an environment where unemployment is very low, with millions of job openings available for the taking, companies, and banks’ balance sheets are strong, finance systems are strong and in good shape, and earnings reports are healthy, from today’s Home Depot and Walmart results we can see consumer is still spending, credit markets are not under stress, demand for housing hasn’t slowed drastically and banks are still well-capitalized,” Sharma stated.

Should the United States economy experience a hard landing after the Fed’s tightening cycle, the central bank could start cutting interest rates, he added.

But will the financial markets remain on a roller coaster ride over the next two years?

U.S. stocks have had a rough 2022, with the leading benchmark indexes losing steam after two years of meteoric growth.

The Dow Jones Industrial Average has declined by about 12 percent. The tech-heavy Nasdaq Composite Index has plummeted 25 percent, while the S&P 500 has tumbled roughly 16 percent.

The Treasury market and the U.S. Dollar Index (DXY), a measurement of the greenback against a basket of currencies, have surged this year. Commodity prices have soared, while cryptocurrencies have cratered.

With several consecutive weeks of losses in the equities arena, Heeten Doshi, founder of Doshi Capital Management, remarked in a note that it takes an average of 12 months to recover.

“While the stats are resoundingly positive moving forward (excluding 2008), the most shocking statistic is that on average, it takes 12 months to recover after so many weeks of losses,” he wrote.

Since the markets are forward-looking, investors might be pricing in lackluster corporate earnings “well in advance,” says McBride.

“A key may be the earnings guidance for 2023 that companies provide in the fourth quarter of the year,” he added.

“If inflation recedes and the Fed is seen as being able to respond to a recession with lower rates, bond prices will recoup some of the losses seen so far this year. But this is contingent on a number of factors that will unfold over the next 12 months or so–inflation, Fed policy, and the health of the economy.”

For U.S. households, the best strategies to employ, according to McBride, are paying down debt, boosting emergency savings, and taking advantage of the market downturn.

A monthly Bank of America survey of fund managers revealed that investors are already beginning to bolster their cash positions. The study reported average cash balances among asset managers was 6.1 percent, suggesting that investors are hoarding cash at the highest level since the Sept. 11 terrorist attacks.

In the end, strategists purport that this is spotlighting an “extremely bearish” position in the financial markets.