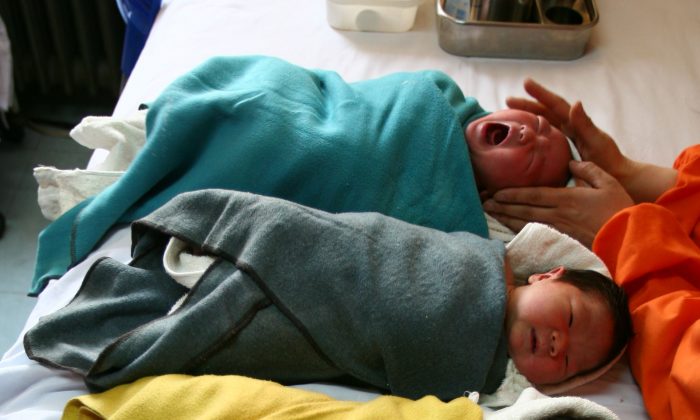 A nurse comforts a baby at the Xining Children Hospital in Xining City, Qinghai Province. Hospitals in Henan Province have been advertising the selling of unwanted babies, according to a report by China National Radio. (Getty Images)
Social Issues

Recently, footage of a mentally-ill mother of eight who was chained up in a village hut sparked outrage on Chinese social media.

The controversy has sparked intense discussion about bride trafficking in the country, where men outnumber women due as a result of the decades-long “one-child” policy instituted by the Chinese Communist Party.

The incident serves to underscore wider problems relating to human trafficking in China, an industry that involves the abduction of children and organ harvesting, according to Chinese human rights activists.

Chinese dissident Yao Cheng was a volunteer at Women’s Rights in China (WRIC), a New York-based non profit, working in China from 2007 to 2016. In an interview with the Chinese-language edition of The Epoch Times, he recounted incidents of child trafficking, as well as suspected organ trafficking using childrens’ organs in China.

Since the regime adopted the one-child policy in 1979, many Chinese female infants have been killed, while some parents tried to give their female babies to Buddhist nunneries to give the child a chance of survival.

Yao recorded in his documentary “Girls in the Nunnery” how he helped to rescue many girls who grew up in a nunnery and to locate their biological families.

His effort earned him 22 months of imprisonment in China in 2013.

Yao’s investigation found that thousands of girls were adopted from dozens of Buddhist nunneries in Tongcheng, a county-level city in Anhui, an eastern province of China.

“The newborns were left in a paper box or a basket padded with a blanket,” he said. “The lucky ones were raised by the nuns, but the nuns could only afford to raise a couple to a few; most others either froze to death or were killed by wild dogs. Of course, if any family was willing to adopt a female baby, the nuns would give it to them.”

Chinese babies, both male and female, are all too often the victims of abduction or kidnapping, and trafficking, according to Yao.

He said that the Chinese police are good at catching state enemies, but not the traffickers, because many police are involved in the operations, which form an industrial chain involving huge profits.

Yao said that, according to statistics compiled by Chinese non profits including WRIC, an estimated 70,000 children are abducted yearly. This number does not include the children who were abandoned.

He explained that those who went missing were bought to be child brides (who would be married to a family member when the child reaches an appropriate age), prostitutes, or even organ donors.

Yao recalled seeing in Santow, an eastern coastal city in Guangdong Province, beds for boys and girls who had been sent to Southeast Asia for organ harvesting. Yao said that he collected all the evidence needed for prosecution, but the police refused to conduct an investigation or take any action to crack down on the crimes.

He believes the lack of response was associated with how lucrative the industry is. “The organs of a child are worth more than one million yuan ($157,000),” he said.

He explained the overseas demand for organs is huge. He identified the child organ brokers in Santow, but could not take further action, “If you try to do anything about it, your life will be in danger.”

In the Putian area of Fujian, a coastal province in the south, there have been internet posts showing more than a dozen children’s bodies that were missing organs and eyes. Yao said, “It’s not something anyone can do with an ordinary kitchen knife; it’s professional, transplant is a delicate operation.”

He believes that many operations were endorsed by high-level officials, because some high-ranking officials and elites of the Party have themselves required an organ transplant.

Why can many of those senior Party cadres, supposedly frail after being through the wars and all the hardships in early life, live into their 90s and 100s?” Yao said. “Look at Jiang Zemin, he’s nearly 100 years old. There’s also a high demand for organs in the Chinese market,” he added, referring to a former CCP leader.

China tops the world in performing organ transplants, but Yao questioned the sources of the organs for a country that lacks a transparent and legal organ procurement program.

A Promise Not Delivered

But, the communist regime intervened.

The WRIC was notified that the regime itself would provide each child in need with 600 yuan ($94.28) a month.

“This is how ugly the regime is. It does nothing good, and prohibits others from doing the right thing,” for fear of losing face to a foreign organization, Yao said.

However, after more than a year, not a dime had been allocated by the regime, he said. A director at the Ministry of Civil Affairs explained to Yao that the government was debating “how to distribute the funds.”

Yao lamented that ultimately it was the children who suffered. “Can these kids not eat for a year or two?” he said. Finally, some money was allocated, but it was not ongoing. Yao believes that even if the funds were available specifically for the children, the majority of it would have been embezzled by corrupt officials.

The dissident said that his volunteer work frightened the regime. The CCP labeled him as an enemy because of his charity work at the WRIC. Many female volunteers left the foundation because of threats from the regime’s public security officials.

“The Party’s logic is simple: Only the Party itself is good; If anyone else is good, that means the Party is bad. Therefore, no good people are allowed in the territory of the Chinese Communist Party,” he said.

Yao used the persecution of Falun Gong adherents in China today as an example.

Falun Gong, also known as Falun Dafa, is a spiritual practice involving meditative exercises and a set of moral teachings centered on the principles of truth, compassion, and tolerance. The CCP started the persecution campaign against Falun Gong in 1999.

“Why would the CCP persecute Falun Gong? Because millions of Chinese Falun Gong adherents are good people. That frightens the CCP,” said Yao.