The Ideas That Formed the Constitution, Part 2: The Founders’ Education 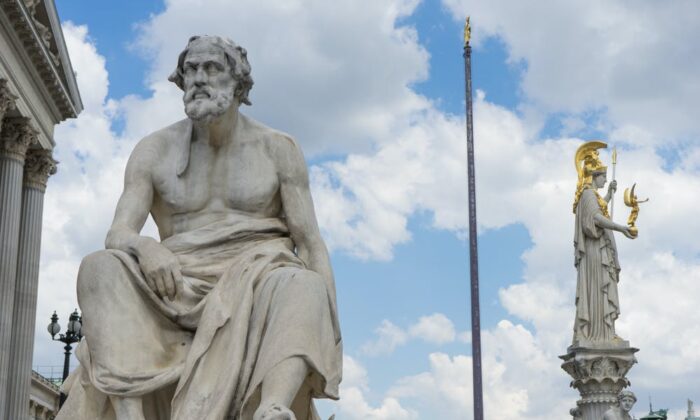 A statue of the ancient Greek historian Thucydides outside the Austrian parliament in Vienna. (sianstock / Shutterstock)

Examine the back of a dollar bill carefully. You’ll find three inscriptions written in the Latin language. The one to the right is “E pluribus unum.” The two on the left are adaptations from the work of the Roman poet Publius Vergilius Maro—whom we call “Virgil.” More on him in a future installment.

This is the second essay in a series on the ideas that formed the Constitution. It focuses on the Founders’ education. You can read the first essay here.

But the heart of the curriculum—for boys and a few girls—was made up of the Greco-Roman classics. The Greco-Roman classics are a large body of writing composed in Greek and Latin between the time of the poets Homer and Hesiod (about 800 B.C.E.) until the collapse of the Western Roman Empire in 476 C.E.* The lines of Virgil paraphrased on the dollar bill were published in about 39 B.C.E.

Nearly all of the Greco-Roman classics have been translated into English. But much of their power is lost in translation. Before I began studying Latin at the age of 32, I had read orations by the Roman statesman Cicero in English, and I had wondered what the fuss was about. But the first time I read Cicero’s prose in Latin, he had me in tears.

Unlike those who prescribe modern public school curricula, the founding generation understood that for teaching languages, it’s best to begin when students are very young. Although adults often learn best through concepts and connections, these often are lost on the young, who absorb more efficiently by rote.

Thus, Latin instruction began as soon as a child enrolled in grammar school. Lessons typically began at 8 a.m., continued till 11 a.m., resumed at 1 p.m., and continued till dark.

As an alternative to grammar schools, wealthy parents sometimes hired private tutors. Other children were taught by their parents. For example, Patrick Henry learned Latin from his father. His fellow Virginian, George Wythe, learned it from his mother. (Wythe was America’s first law professor, one of the Constitution’s framers, and chairman of the committee of the whole at the Virginia Ratifying Convention.)

Most modern Latin teachers make the unfortunate mistake of beginning Latin instruction with grammar rather than with speaking and listening. Most make the additional mistake of teaching students only to read and not to speak or write the language. Founding-era schoolmasters made the former mistake but not the latter: Grammar school graduates were expected to speak and write Latin as well as read it.

Once the fundamentals were covered, grammar school students read authors such as Cicero; the historians Sallust, Livy, and Tacitus; and the poets Virgil, Ovid, Horace, and Juvenal. There seems to have been less interest in Julius Caesar’s books than is common in Latin classrooms today.

Grammar schools didn’t aspire to teach Greek as thoroughly as Latin. Boys read the New Testament, where the Greek is relatively easy. They also studied passages by Homer; the philosophers Plato and Aristotle; the historians Thucydides and Polybius; the biographer and moralist Plutarch; and a writer who is hard to peg by subject matter: Xenophon the Athenian.

Relatively few boys attended college, although a disproportionate number of the Constitution’s framers (drafters) had done so. To get into college, the student had to pass an admissions test. Typically, it required translating passages from Latin authors into English and translating parts of the Greek New Testament into Latin.

Much of the college curriculum consisted of additional reading in the Greek and Latin classics.

Grammar school pedagogy often was crude and sometimes cruel. (Caning was common.) You might think this caused students to hate the classics. Not so.

The surviving Greek and Roman literature has survived for a reason: It’s really good stuff. Despite the shortcomings of their teachers, most of the leading Founders remained devoted to classical literature and the lessons it communicated.

Thomas Jefferson is a prominent example. He read Greek and Latin classics more than any other books, and Greek was his favorite language. But Jefferson isn’t really on point for us, since he was in France when the Constitutional Convention met and had little influence on the Constitution itself.

More relevant to the Constitution is a 1783 committee report to the Confederation Congress recommending that Congress acquire copies of crucial books. The committee’s list included works by Plato, Aristotle, and Plutarch; several volumes of Greek and Roman history; and what was described as the “best latin dictionary.” The report is relevant to the Constitution because its authors were James Madison of Virginia, Thomas Mifflin of Pennsylvania, and Hugh Williamson of North Carolina—all future framers. Williamson, incidentally, had been a Latin teacher.

Historians often credit James Wilson as, next to Madison, the framer with the most influence on the Constitution’s text. Wilson was born and raised in Scotland and educated at what’s now the University of St. Andrews.

In 2005, the chief librarian at St. Andrews invited me to examine Wilson’s 1757–58 academic records, which I finally did in 2009. The records included the list of books Wilson borrowed from the stacks to satisfy his own reading interests. I found that his most requested subject (by far!) was the history of Rome. Wilson also borrowed a volume of Horace’s poems.

After immigrating to America, Wilson taught Latin for a while and remained devoted to the classics: His collected works feature dozens of references to Greek and Roman authors.

John Dickinson of Delaware has been called the most underestimated framer. However, as I documented in one of my research articles (pdf), his contributions to the Constitution were considerable. Dickinson collected books by Greek and Latin writers throughout his life and quoted them copiously. After the Constitutional Convention was over, he wrote an influential series of essays urging ratification. He employed the pen name “Fabius” after a Roman general who figured prominently in the works of Livy and Plutarch. In a letter sent late in life, Dickinson announced that he was rereading the Roman historian Tacitus, one of the more difficult Latin writers.

George Mason of Virginia, a framer who composed the Virginia Declaration of Rights, contributed to the final Constitution by insisting that it contain a Bill of Rights. After the convention, Mason spent his retirement years rereading classical works. Patrick Henry, another prominent Bill of Rights advocate, made a point of rereading annually an English translation of Livy’s history.

Although John Adams was in Europe during the drafting convention, he influenced its deliberations in two ways. First, he was the principal drafter of the 1780 Massachusetts Constitution, which, along with the New York Constitution, served the delegates as a model. Second, Adams penned an encyclopedia on republican governments, the first volume of which was published just before the convention met. That volume relied on Cicero, Plato, Polybius, Livy, and Plutarch, among others. The delegates consulted it often.

Some Founders had been denied the benefits of a classical education. Among these were Alexander Hamilton and George Washington. Both worked assiduously to ensure that the younger members of their own families weren’t similarly deprived.

The Greco-Roman classics remained constantly in the minds of those who drafted and ratified the Constitution. In future installments, we’ll see how the Founders wove the lessons of classical literature into the document.

* Note From the Author: Some Epoch Times commenters have pushed back against my previous use of “B.C.E.” and “C.E.” rather than “B.C.” and “A.D.” However, B.C.E. and C.E. are now standard in historical writing. Moreover, “B.C.” (Before Christ) and “A.D.” (Anno Domini—in the year of Our Lord) embody specifically Christian affirmations that conflict with my Jewish faith.