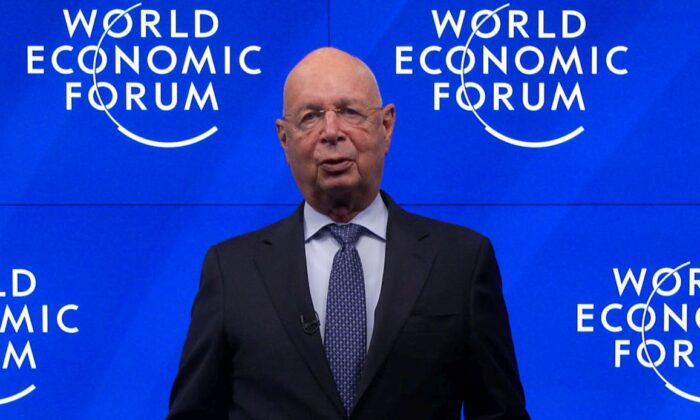 The ‘Great Reset’ Is a ‘Great Setback’

“You will own nothing, and you will be happy.” This confronting statement emanates from the World Economic Forum (WEF), an international non-governmental lobbying organisation established in 1971 by German engineer and economist Klaus Schwab.

The forum is headquartered in Switzerland, and since its inception, it has sponsored projects that are enthusiastically embraced by those who seek to overturn the existing world economic order.

Importantly, WEF organises the famous Davos Agenda talkfest, where leading economists, politicians, and even royalty share their views on social, financial, economic, and political developments worldwide. Lately, WEF has been resolutely promoting the “Great Reset.” But what is it?

Klaus Schwab and Thierry Malleret published a book in July 2020, entitled “COVID-19: The Great Reset.” With this publication, they seek to identify the weaknesses of capitalism which, according to them, were exposed by the pandemic.

But the idea can be traced back to 1971 when Schwab founded the WEF and started to promote the concept of “stakeholder capitalism,” which encourages companies to relinquish their for-profit purpose and embrace a social function. However, the phrase “Great Reset” came into full use in 2010 following the publication of a book, “The Great Reset,” authored by Richard Florida.

The “Great Reset” may be described as a radical international-socialist plan designed to “reset” the world economy. The goal is to install a highly centralised, heavily regulated, totalitarian system akin to that of China’s Social Credit System.

Schwab has constantly praised Chinese Communist Party (CCP) leader Xi Jinping, including a statement made this year in which he told him that China’s dictatorial regime has made “significant social and economic achievements under his leadership.”

The “Great Reset” aims at rebuilding society “sustainably” after the COVID-19 pandemic. This process would require dismantling the current “shareholder capitalism” system and the erasure of “individualism.”

Schwab and other “Great Reset” leaders “have been making arguments against ‘shareholder capitalism’ for literally decades, going all the way back to the 1970s.”

But now, the COVID-19 pandemic is perceived by them as an opportunity to refashion the world, weaponise the digital revolution, and save the planet from the supposed effects of “climate change.”

The digital revolution is far-reaching and seeks to intrude into every aspect of people’s lives, including their personal thoughts and aspirations. It endeavours to refashion societies and economies with its invasive technologies.

In advocating “stakeholder capitalism,” it promotes the idea that companies should foster the happiness and comfort of all stakeholders, namely all members of society.

The idea thus justifies a gigantic effort to redistribute wealth in society and to minimise the economic differences between nations.

As such, the Reset is inspired by the type of “capitalism” promoted in the People’s Republic of China, described as “a two-tiered economy, with profitable monopolies and the state on top and socialism for the majority below.”

Of course, the idea that companies should relinquish their profit-making mission and pursue the general welfare of people and the planet is confronting because it radically changes their traditional purpose.

In an illuminating article, American scholar Michael Rectenwald argues that “Stakeholder capitalism requires not only corporate responses to pandemics and ecological issues such as climate change” but the wholesale rethinking of corporations’ duties towards vulnerable communities within the ecosystems.

He notes that, to this effect, the international community has already developed the Environmental, Social, and Governance (ESG) Index to “drive ownership and control of production away from the non-woke or non-compliant.”

Stakeholder capitalism entails the collaboration of the corporate world with big government to crush the spirit of individualism that otherwise might be relied upon to set up companies on the shareholder model.

The COVID-19 pandemic has given proponents of the “Great Reset” a tremendous boost because it occasioned the elimination of many small businesses, facilitated authoritarian decision-making, eliminated competitive attitudes in the management of the economy, created an unsustainable welfare state, and adversely affected children’s education while crushing the independent sector of the economy.

It has also accelerated the digital control of people and increased exponentially the use of facial recognition and data collection technologies, coupled with unfettered control mechanisms, the imposition of vaccine mandates, huge supply issues, and unrealistic zero-emissions rhetoric.

The authoritarian government’s response to the pandemic has turned society into a genuinely dystopian landscape.

The changes caused by the digital revolution, by themselves, may neither be unusual nor undesirable, but the use of these technological developments to bring about the “Great Reset” is threatening.

The Reset is also helped by social developments, such as the cancel culture, political correctness movements, and BLM (Black Lives Matter) movements.

BLM’s main founder, Patrisse Khan-Cullors, has written about this movement in her bestselling “When They Call You a Terrorist: A Black Lives Matter Memoir,” a book where she reveals her “appreciation for the work of the U.S. Communist Party, especially Black communists.”

Regarding “cancel culture,” Alan Dershowitz, the Felix Frankfurter Professor of Law at Harvard University, describes it as the “new McCarthyism of the ‘woke’ generation.”

As with the old McCarthyism, he explains, “it ends careers, destroys legacies, breaks up families, and even causes suicides—with no semblance of due process or opportunity to disprove the often-false or exaggerated accusations.”

As for “political correctness,” Dershowitz explains how “the very term was coined during the Stalin regime to impose limits on free speech, free thought, and other liberties.”

All these international-socialist movements are united in their common goal of removing any opposition to the communistic “Great Reset” agenda. Hence, snitching, suppression of free speech, discouragement of individualism, artificial intelligence and facial recognition technologies, government-sanctioned discrimination against the unvaccinated, the allocation of a social credit score is used to facilitate the advent of a new economic world order.

It is doubtful that “stakeholder capitalism” could ever work. Indeed, why would anyone want to build a company if not for profit-making purposes?

It could be envisaged that the “Great Reset,” if it functions as a disincentive to the setting up of businesses, will change the way capitalism works. Indeed, “stakeholder capitalism” fundamentally misunderstands the nature of man, which is to look after himself or herself, unfettered by the “Great Reset,” a form of “communist capitalism.”

Australia is well on the road to embracing this new disruptive mission and preparing for this brave new world. To this purpose, the federal government established an “Industry 4.0 Advanced Manufacturing Forum,” which maintains a website where it promotes the connection of the physical world with the digital world.

It is argued that this will “offset our traditional challenges such as high labour costs and distance to markets.”

Reflecting on its determined attempts to change the purposes of companies, Rectenwald believes that the “Great Reset” is a “Great Setback.” He optimistically concludes his article by predicting that the “Great Reset” will fail because its goals “depend on the obliteration not only of free markets but of individual liberty and free will.”

Rectenwald predicts that the reset is doomed to fail provided we fight it “with all our might.”

We hope he is correct because the WEF statement “You will own nothing, and you will be happy” is insanely irresponsible and disregards the reality that society is made up of individuals of free will.

To conclude, supporters of the “Great Reset” regard the COVID-19 pandemic as an opportunity to usher in their 21st century brand of communism. If their plan were to be successful, the current economic system will be replaced with a centralised economic system, which would undermine individual rights.

Hence, if people value their rights to privacy, to property, to free speech, and to democratic representation, the “Great Reset” agenda and its ongoing implementation by the Australian federal government should be treated with suspicion.