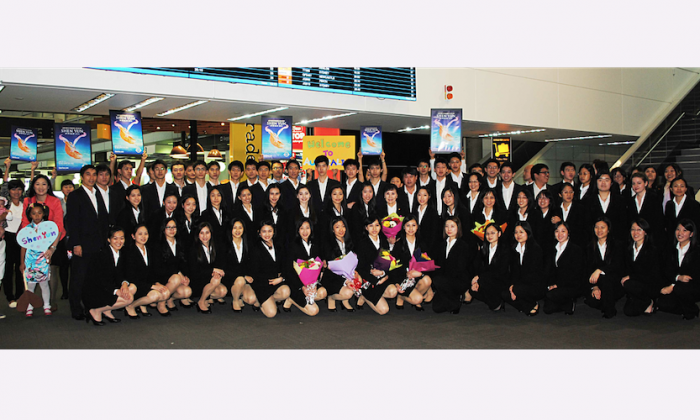 BRISBANE, Australia—Blue skies and warm autumn weather greeted the Shen Yun Performing Arts International Company when they arrived at Brisbane airport on Tuesday, April 22, as the company continued the Australian leg of their world tour.

Excitement grows south of Brisbane where The Arts Centre Gold Coast will host five Shen Yun performances this week at the Arts Theatre. The Arts Centre complex is in a popular tourist area surrounded by surf and sand, and bordered by a lush hinterland.

Audiences are in for an experience of a lifetime as the New York-based company revives 5,000 years of Chinese civilization through the performing arts. “A Shen Yun performance features the world’s foremost classically trained dancers, a unique orchestra blending East and West, and dazzling animated backdrops—together creating one spectacular performance,” explains Shen Yun’s website.

Queensland’s Premier Campbell Newman’s sent greetings to Shen Yun Performing Arts International Company. His welcome message said, “The arts has a vital role to play, not only in entertaining us, but bringing people together. For the last seven years in Australia, the dancers and musicians have provided a colourful spectacle and helped build cultural bridges between East and West.”

“She was just such a powerful singer, incredible, what she brought,” Ms. Watt said of Min Jiang, whom the enthused crowd cheered to an encore performance.

“It was a lovely show,” he said, after seeing Shen Yun Performing Arts at the Sydney Theatre on April 16.

“It is important for people to really understand just how rich Chinese culture is, particularly through their art forms,” he said, adding that for many people, Shen Yun will be their first exposure to traditional Chinese arts.

Shen Yun Performing Arts on the Gold Coast, Queensland, has performances April 24 – 27 at the Arts Theatre.

From the Gold Coast, the Shen Yun International Company travels onto Perth, with performances May 1 – 4 at the Regal Theatre.

Shen Yun then farewells Oceania and returns to the United States via Honolulu.