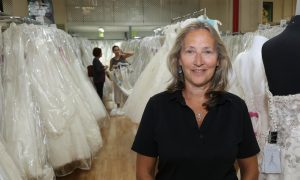 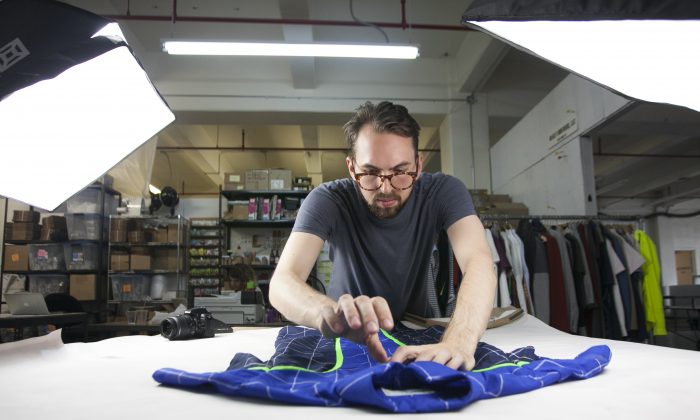 NEW YORK—A simple T-shirt can pass through thirty pairs of hands before it makes it to the consumer, and every single article of clothing we wear is made by hand.

“People don’t understand that, because when we think of manufacturing we have this image of a Ford factory line. They don’t understand how little of fashion is actually automated,” said Bob Bland, founder and CEO of Manufacture New York, a tiny incubator in Midtown that has seen close to 400 designers use the space to make their starts in the past year.

The city has been the center of fashion in the United States since the early 20th century, but rising rents and the alluring low costs of outsourcing are increasingly chipping away at Midtown Manhattan’s Garment District, with its 7.7 million square feet of space in buildings from 34th to 42nd streets and Fifth to Ninth avenues.

There are efforts to preserve the Garment District as it stands, but Bland is thinking bigger. Her goal is a sustainable solution that will let the industry grow through future generations and reverse the outsourcing trend. To do that, Bland and others are capitalizing on the growing creative energy and resurgence of manufacturing in Brooklyn.

An article of clothing often travels three or four continents before the final sale, and there are ethical and waste-reducing choices that can be made at so many points in between, said Debera Johnson, executive director of Pratt Institute’s Brooklyn Fashion and Design Accelerator (BFDA).

Consumers are becoming more aware of some of these impacts, but designers can lead the way. Pratt is developing a 20,000-square-foot space at the former Pfizer building in Brooklyn to help companies start and grow in a sustainable way.

“Designers have a lot of say about what the world looks like,” Johnson said. “We’re surrounded by the culture of design.”

With these more ethical choices comes a higher price tag, so advocates for local manufacturing are typically dual advocates for sustainability.

The trend is growing, and new designers continue to push it forward. Fiona Dieffenbacher, BFA director in the Fashion Design department at Parsons, said her students are overwhelmingly interested in furthering the movement.

“The cost of fast fashion—it’s human capital at the end of the day,” Dieffenbacher said. “The next generation has to change that. They’re the ones that can do it.”

Beyond ethics and environment, local manufacturing is also an issue of innovation.

“Local manufacturing is critical,” said Andrew Ward, adjunct professor at the Fashion Institute of Technology and acting executive director of the Garment Industry Development Corporation. “Without it, you’re not going to create any new brands. It’s that important.”

A decade ago, if you’d asked a graduating class of fashion design majors how many planned to start a business, most would raise their hands. Today, very few do, Dieffenbacher said.

“They’re more aware of the challenges than before with the Internet and people telling their stories,” Dieffenbacher said. Stories of success are just as valuable as those of failure, and it’s all immortalized through social media. When a recent graduate pulled back from launching a line and decided to hold off, Dieffenbacher said, all his peers were on that journey with him through Facebook, Twitter, Instagram.

In a way, the digital movement has also helped to counter the depletion of the Garment District. Resources like Maker’s Row, the city’s Economic Development Corporation, and Council of Fashion Designers of America have created databases connecting designers to every manufacturing resource they could need, bolstering businesses.

Starting designers are met with a barrage of business risks and challenges so many opt to intern and work for other companies for a few years before diving in, Dieffenbacher said. It’s just the reality of the industry.

“The cash flow in the fashion business is so, so tight,” Dieffenbacher said.

Even a very small line is cost and time consuming. At about a few hundred dollars per sample, it easily totals tens of thousands before a new designer makes his or her first sale.

Private equity is sought after because fashion startups can’t get loans unless the company has been open for two years, but venture capitalists and angel investors aren’t available to them because they are almost exclusively interested in tech companies.

The result is that many designers without financial support can’t afford to stay, Bland said. Years ago she watched so many of her talented peers leave the city, as anywhere was cheaper than New York. She kept holding out and waiting for someone—the city, or some nonprofit—to step in and create a resource to help designers launch in the city, but it never happened.

“I realized if no one else is going to step in, I’ve got to do it,” said Bland. Since then her 2,000-square-foot hybrid incubator-factory in Manhattan has been the workspace of 300–400 designers who use it for pattern making, sewing, product development, or even as a mailing address.

The heart and soul of the fashion industry resides in just a few blocks across Midtown Manhattan. The majority of apparel manufacturers and vendors are based in the Garment District, sales are made there, and the energy during fashion weeks is unparalleled.

As with any other industry, proximity matters. A recent MIT study found that 77 percent of all trips made by fashion designers are within the confines of the Garment District.

Sometimes a manufacturer will be pushed out to Long Island City or Brooklyn, but their customers don’t always follow.

Bland aims to change that with a vertically integrating hub that will allow companies to scale up to high volume production if needed.

A 160,000-square-foot floor space at Liberty View Industrial Plaza is currently in development. It spans an entire block in Sunset Park, Brooklyn, next to the vibrant maker-community of entrepreneurs who share 6 million square feet of space in Industry City.

Pratt’s BFDA is making a similar move, with its accelerator set to open in the fall in Brooklyn. In 2002, Johnson founded the Pratt Design Incubator, which later evolved into a graduate department center, and it showed her how necessary it was to provide resources to the general community of designers.

The Accelerator functions more like a next step to the incubator.

“Short run apparel production is critical to companies that are scaling,” Johnson said. Making one sample yourself is manageable, and ordering 500 as a big company is successful, Johnson said, but getting from one end to the other is very difficult. Thus all of the equipment—knitting machines, digital fabrication machines, and so on—will be available to anyone needing to make small-run orders of 15–20, a crucial step for small companies to make sales.

Being sustainable means in an economic sense as well, Bland adds.

“This was always a 20-year project for me, to provide new jobs not just for my generation but our children’s generation,” Bland said.

When Bland decided to start Manufacture New York, she spent the first year just on community building. Jobs in the trade are high-skill and high-wage, and when the Brooklyn location opens, Bland hopes to bring in the local community.

The plan is to have every aspect of the manufacturing process possible in the space, from textile manufacturers to pattern making, to even a research and development tech annex. It will include workforce development training, tours for the public, and an estimated 280 jobs.

The hub of interrelated companies will create the opportunity for a Garment District to grow in Brooklyn in a way that it cannot in Manhattan, and start to remove the physical need to be located in Manhattan, where rents run up to $40 per square foot for industrial space.

“This is an oasis,” Bland said. “Companies can sign 20-year leases with us, if they want to.”

The interest [in sustainability] is present in all of our students. In the last three to five years it has really grown, and it’s not a trend that’s going away. —Fiona Dieffenbacher, BFA Director of Fashion Design at Parsons

[Brooklyn] is the creative center of the universe. … Personally, seeing young people who are making changes in the world—I want to see them flourish. I want to see them succeed. —Debera Johnson, executive director, Brooklyn Fashion+Design Accelerator

In the Garment District you can witness the entire fashion cycle: new brands coming in and growing, growing to the top before they decline. —Andrew Ward, FIT adjunct professor and acting executive director, Garment Industry Development Corporation

Manufacture New York’s Brooklyn manufacturing center at the Liberty View Industrial Plaza will include a tech annex and research and development center that could fit up to 25 fashion-tech startups for everything from wearable tech, to new textiles, to new hardware for manufacturing.

“3-D printing is just one part of it, rapid prototyping is just one part of it. A lot of industries really emphasize that, but we’re looking at everything from biofabrics—textiles rendered from algae—to embedded tech, like magnetic and copper wires embedded into fabric to basically make your clothes into batteries,” Bob Bland, founder and CEO of Manufacture New York, said. “It’s really limitless what we’ll be able to do with the tech annex and R&D center.”

Tech companies will also benefit from working close to designers, and vice versa.

“It’ll allow aesthetics to come into play,” Bland said. “Sometimes … it doesn’t look good, and that’s because you didn’t have designers sitting with developers, technologists. So it’s very important for technology companies to have the ability to test with designers and collaborate with designers.”

Fashion Industry by the Numbers*

At one time, 95 percent of the clothing sold in the United States was manufactured in New York City’s Garment District, and that FIGURE has dwindled down to 3 percent. As consumers become increasingly interested in sustainable options, interested groups and the city are looking for ways to preserve and expand the district, possibly into the outer boroughs.