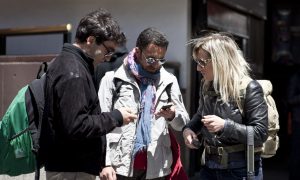 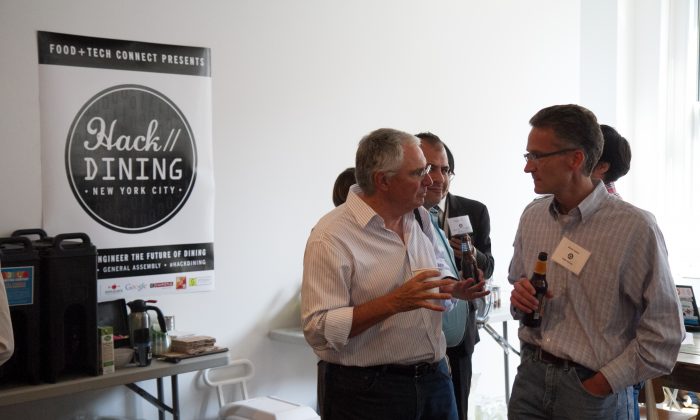 The Future of Food: Quantifying Dining

NEW YORK—A group of hundreds in New York is imagining a world where you can know exactly how you’ll feel about your lunch two hours from now, two weeks, months, or more, and how exactly the smaller dining choices you make affect your life and health overall.

Trey Shelton is one of 200 participants in hack//dining, a hackathon for coders that took place over the weekend. He proposes an app that would create a constant feedback loop of a user’s food choices.

“[It’s] to get them into a better loop of thinking about food in a positive manner,” Shelton said. He encourages people to move beyond focusing only on how the food tastes. And his motivation is simple.

“I obviously want to save the world,” Shelton said.

He’s now working on the app with Melissa Wong from the fund crowdsourcing website Kickstarter, and Ashley Quinn, a UI/UX (User Interface and User Experience) designer who he had never met before Friday. This past weekend, over 200 people from designers, developers, and chefs, to people working in any segment of the food industry, came together to envision the future of food.

Technology is becoming increasingly vital across all sectors—especially evident in New York City—and food is no exception. But the world of food is complex, ranging in industries from agriculture to hospitality to delivery services like Grubhub. Each day, countless opportunities for data collection are falling by the wayside.

“Dining is something everyone does. It’s a huge part of our economy and there are so many challenges,” Gould said. “So we bring the best and brightest minds from all these different areas to break down problems and rapidly prototype solutions.”

Food establishments present a challenge to coders who wish to figure out how to provide customers with the ability to vote with their dollars.

“In a lot of food service settings you don’t have that, you just eat whatever is given to you,” Gould said.

This challenge is also of interest to certain companies. For instance, Google is known for buying food for employees, and meat supplier Applegate is interested in having the consumer’s voice heard across the food supply chain.

Over the years Food+Tech Connect’s events have grown from small and unstructured general hackathons with a handful of people, to this year’s event with partners like Applegate, Google, Batali & Bastianich Hospitality Group, and Chipotle. There are close to 200 participants and a waiting list almost just as long.

“I think these are real challenges that can be addressed,” said software architect Brian Yang, who has been working on three apps over the three days.

To allow for customer feedback at food service establishments, he created an app intended for use on two tablets—one for the customer to rate as they buy their meals, and another when they throw out their trash and return their trays.

And to address the issue of cost to the establishment owner, the feedback is sent to Raspberry Pi [miniature computer], which eliminates the need for the Internet and costs about $35.

Another one of Yang’s ideas deals with restaurant waste, but takes a consumer-oriented approach as well. Fast food companies like Chipotle are required to post calorie counts, but when your burritos are subject to random quantities of ingredients, the count becomes arbitrary, Yang said.

“I feel data is empowering but there’s too much generalization. It becomes irrelevant if it’s generalized,” Yang said. His idea is to use a tray-like scale that can be outfitted with wheels, so whenever an item is added along the Chipotle line, the customer can see on their app the exact amount and nutritional value.

“There’s a lot of technologies and tools and applications moving toward helping us achieve that but it’s not adopted and hasn’t been made easy to use,” Yang said. But projects like hack//dining are helping to create real solutions.

Gould started Food+Tech Connect in 2009 after realizing there was a wealth of data that could be found just through social media channels.

Food+Tech Connect, anchored in New York, is the website of record for food technology, from industrywide news to online business classes for startups, and everything in between.

“I realized one of the big issues in food is that we have a lack of information flow that hampers all sorts of decision making,” Gould said.

The shortage of resources is one of these huge challenges, said judge Dorothy Cann Hamilton, founder and CEO of the International Culinary Center. Over the last few years people have begun to look at food through a different moral lens, and chefs can impact how and where food is sourced.

“People lead in restaurants; they’re willing to try something or if they don’t know how to cook something they get inspired by a restaurant,” Hamilton said. “That’s where you change the consumer attitude.”

“Deliciousness is very, very important still, because people will eat something delicious, but it can’t be elitist anymore,” Hamilton said. “It can’t be sacrificing water, indulging in animals that take too much of the resources.”

Chefs lead the way, and as an educator of professional chefs, Hamilton feels responsible to stay ahead of the curve.

“I think these people are going to open my mind to think on a different dimension,” Hamilton said. “We just don’t have enough food in the world to feed everyone so we’re going to have to think outside our traditional box.”