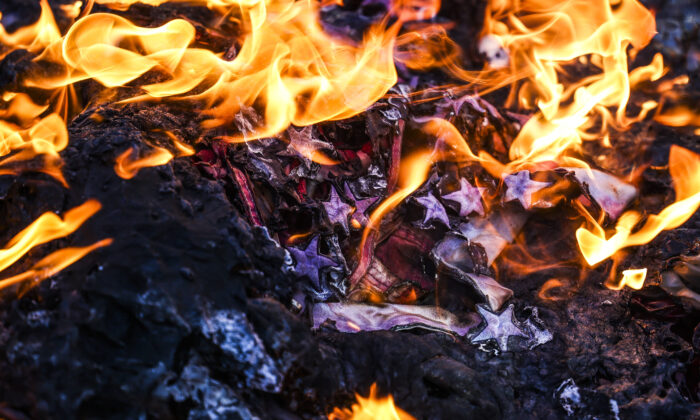 Members of the Communist Party USA and other radical groups burn an American flag on the steps of the Colorado State Capitol in Denver, on Jan. 20, 2021. (Michael Ciaglo/Getty Images)
Viewpoints

The French Revolution Is Attacking the American Revolution

“That’s insane!” These days, how often do we say those words? The litany could go on and on.

Dr. Seuss is suddenly persona non grata, with six of his books removed from publication because they are “racist” and “hateful.” That’s insane!

Statues of Abraham Lincoln are being torn down and schools named after the Great Emancipator renamed in the cause of fighting racism. That’s insane!

Woke educators decry mathematics education focused on getting “the right answer” as an expression of white privilege and patriarchy. Suddenly, math is about social justice. That’s insane!

No. Actually, it’s not. “Canceling,” as it is called, is a coldly calculated strategy implemented with malice aforethought. The goal isn’t to persuade. Social excommunication, media deplatforming, and the trashing of venerable traditions don’t seek to reform institutions or promote societal improvement. Rather, the point is to destroy every traditional religious, social, and political institution judged guilty of constructing Western civilization, toward the end of rebuilding society in the image of Woke.

Let me put it more simply: The French Revolution is attacking the American Revolution.

The French Revolution? Am I nuts?

I don’t think so. Sure, circumstances are different. Antifa and their allied corporate wokesters aren’t attacking a king living in splendor as the common people starve. And to be sure, no guillotines have been installed in public squares to chop off heads. Well, at least not literally.

But I believe we are in the midst of a social upheaval every bit as radical and potentially destructive as the one that tore France apart in the late 18th century, a revolution that aims at demolishing traditional Americanism as thoroughly as the original version did the French monarchy.

The French Revolution isn’t just a historical event. It can also be thought of as a metaphor that describes a particularly destructive utopian zealotry. Similarly, the American Revolution can refer to more than the events culminating in the founding of the United States, but also, as the embodiment of a value system of ordered liberty and individual freedom. The values of the two upheavals—both historically and as metaphors—couldn’t be more antithetical.

Realizing that the neo-French and American Revolutions aren’t all one thing but in the real world can share attributes, we can make the following general observations:

The Bible says we will be known by our fruits. I think that is also true of philosophical systems.

The historic fruits of the French Revolution have been despotism, death, and destruction—in the Reign of Terror in France, the Bolshevik Revolution in Russia, and the catastrophic Cultural Revolution of China, all of which were pursued with French Revolutionary values and zealotry.

The fruits of the American Revolution have been rising levels of personal freedom in the West unheard of in human history and the creation of the most prosperous society on earth. It is why downtrodden people from the world risk life and limb to get to the United States. They believe in the American Dream.

It will take time for the passions fueling our American French Revolution to bank. But if we stay resolute and defiant, if we resist succumbing to the Jacobins’ bullying, that day will come. As the old saying goes, the Revolution always eats its own.

But I fear our situation is going to get worse before it gets better. Today, Dr. Seuss was canceled. Tomorrow, it could be Mr. Rogers—he was, after all, a white, male, Christian pastor who was depicted as living in a privileged suburban neighborhood and spoke to his audience of children in the oppressive binary terms, “boys and girls.” Off with his head!