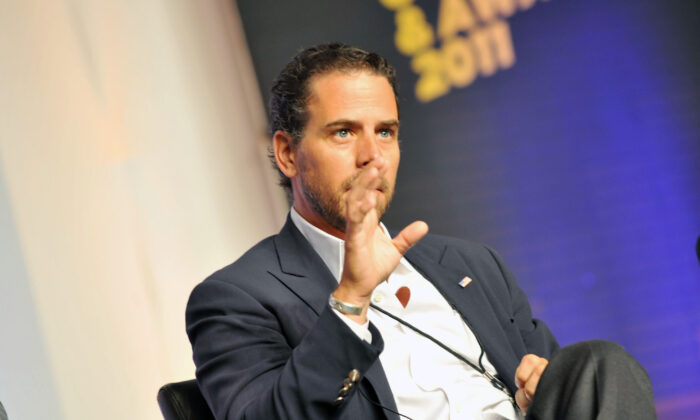 On April 12, 2019, Hunter Biden took his damaged laptop to a computer repair shop in Wilmington, Delaware. It was the beginning of a series of fateful events that would culminate in The New York Times finally admitting on March 17, 2022, that Biden’s laptop and its contents were real.

Previous reporting by the New York Post detailed emails that were found on Hunter Biden’s laptop that showed that then-presidential candidate Joe Biden, his brother James, and son Hunter Biden were all deeply entangled in various overseas business ventures, in countries including Qatar, Ukraine, Russia, and China.

The emails also showed that Hunter Biden was directed by the head of a Ukrainian energy company’s board to find a way to stop the investigation into the company. While the authenticity of his laptop had been confirmed earlier, it unfortunately took verification by The New York Times to allow the story to enter the mainstream.

The intentionally delayed admission from the corporate media that Biden’s laptop is real raises many material questions, including those surrounding President Joe Biden’s fitness for office and his ability to direct our foreign policy, particularly in relation to the Ukraine–Russia conflict.

The existence of Hunter Biden’s laptop was first publicly disclosed on Oct. 14, 2020, when the New York Post ran a front-page story detailing how emails found on the laptop tied his father to his Ukrainian business partners.

When the story first broke, a broad coalition comprising corporate media, intelligence officials, and Big Tech interfered in the 2020 election by censoring and suppressing the story, claiming that it was a Russian plot. Twitter first issued warnings regarding the Post’s story, and then suspended the account of the Post for running the story‚ along with those of reporters who were looking into the allegations. Facebook announced that it would be limiting the distribution of the story on its platform while it supposedly fact-checked its claims. That fact-check never came.

CNN political director David Chalian issued internal orders that reporters not cover the story, telling his staff: “Obviously, we’re not going with the New York Post story right now on Hunter Biden. We’ll just continue to report out this is the very stuff that the president was impeached over … that Senate committees looked at and found nothing wrong in Joe Biden’s interactions with Ukrainians.”

Notably, the Biden administration, in direct violation of the First Amendment, has repeatedly admitted that it has been working directly with big tech companies to censor or eliminate what it deems to be disinformation.

Throughout the 2020 campaign, Joe Biden repeatedly denied any knowledge of Hunter Biden’s overseas business, stating, “I have never spoken to my son about his overseas business dealings.” During the second presidential debate, Biden went further, claiming that stories about his son’s laptop were “a Russian plant.”

Biden was reciting a statement from a group of more than 50 former intelligence officials, including former CIA Director John Brennan and former Director of National Intelligence James Clapper, who all falsely claimed that the Hunter Biden laptop story was Russian disinformation. The intelligence officials issued their statement directly in front of the 2020 presidential election through a public letter on Oct. 19, 2020, which stated that the Post’s story “has all the classic earmarks of a Russian information operation.”

The claim of a Russian plot was preposterous. Many of the emails on the laptop had already been verified by the Biden family’s one-time business partner, Tony Bobulinksi, who had matching copies of many of the same emails and text messages. Of greater importance, the FBI had taken possession of the laptop in December 2019. Moreover, the FBI had opened an investigation into Hunter Biden for multiple offenses—including potential money laundering and possible violations of the Foreign Agents Registration Act. But the corporate media ignored—or worse still, hid—these facts, choosing instead to push the Russian disinformation claim.

In the end, the media’s suppression tactics worked, and many Biden voters never found out about his son’s laptop or the fact that the Biden family was under FBI investigation. The impact of the media blackout on the Biden story had material ramifications for the outcome of the presidential election. A late 2020 poll showed that 45 percent of the Biden voters were completely unaware of the many allegations against Hunter and Joe Biden. That same poll also suggested that public knowledge of this information would have changed the outcome of the election.

The failure of the Department of Justice (DOJ) to alert the public to a crucial national security issue not only impacted the 2020 presidential election, but also changed the course of the January 2020 impeachment against Trump—only the third impeachment in the 244 years of our nation’s history—when the FBI and DOJ failed to disclose the existence of crucial and exculpatory evidence from Hunter’s laptop.

Then-Attorney General William Barr, who ultimately oversaw the investigation into Hunter Biden, has never adequately explained why that information was concealed. Had Barr disclosed the information he was sitting on, the case against Trump—which was premised on Trump’s intention to investigate the Biden family’s corruption in Ukraine—would have fallen apart.

That investigation continues to this day and appears to be heating up. Indeed, it may be likely that The NY Times’s belated admission is an attempt to get ahead of the story, particularly as reports have now begun to circulate that Biden is currently the “subject/target” of a grand jury investigation.

Perhaps the most damning email on the laptop was the one that Biden received on Nov. 2, 2015, from the head of Burisma’s board, Vadym Pozharskyi. That email tasked Biden with producing “deliverables,” stating that the “ultimate purpose” was to “close down any cases or pursuits” against Burisma owner Mykola Zlochevsky in Ukraine. Earlier in 2015, Pozharskyi had “spent some time” with Joe Biden in Washington.

Pozharskyi’s target appeared to be Ukrainian Prosecutor General Viktor Shokin, who had reopened an investigation into Zlochevsky that had been shut down by his predecessor in late 2014 after Burisma had allegedly paid a $7 million bribe to the Ukrainian prosecutor’s office. The allegations of the bribe were made public through the release of a 2016 State Department email.

By the time Biden left office in January 2017, all investigations into Burisma had been closed.

Shokin, who has been portrayed in the media as a corrupt prosecutor, was praised by some notable State Department officials for his honesty, in the months leading up to his dismissal.

Victoria Nuland, Biden’s current undersecretary of state for political affairs, personally wrote to Shokin in June 2015, telling him, “We have been impressed with the ambitious reform and anti-corruption agenda of your government.” That letter was hand-delivered to Shokin by then-U.S. Ambassador to Ukraine Geoffrey Pyatt on Nuland’s orders.

Nuland also said ongoing reforms from Shokin demonstrated his ability to “investigate and prosecute corruption and other crimes in an effective, fair, and transparent manner.”

Shokin’s credibility was highlighted again in a September 2015 speech by Pyatt, when he stated that “we want to work with Prosecutor General Shokin” because Shokin was “leading the fight against corruption” in Ukraine.

The media has also repeatedly reported that Shokin had closed his investigation of Burisma before Biden pushed for his firing. Former Attorney General Barr has made the same false statement in his new book. In truth, as evidenced in a contemporaneous news report, Shokin had successfully sought an order from Ukrainian courts to seize Zlochevsky’s assets. Those assets were eventually seized on Feb. 2, 2016—just a month before Shokin’s firing by Poroshenko in March 2016.

There are many other damaging emails on Hunter Biden’s laptop. In the space of just one year, now-defunct Chinese conglomerate CEFC China Energy paid him nearly $6 million for consulting and legal fees. The company was owned by Chinese billionaire Ye Jianming, who mysteriously disappeared in March 2018. After the company folded, a woman called Bao Jiaqi, who appears to have served as a company secretary, emailed Biden to say that he should take any remaining money from an offshoot company, Hudson West IV, run by Ye associate Gongwen Dong. Bao told Biden, “Nobody will care whereabouts of nobody’s money.”

Biden’s financial transactions were subsequently flagged as suspicious activities by the corporate compliance team at Wells Fargo, who sent Biden a list of questions, including several that related to transfers being made to Joe Biden’s brother James. It’s not known whether the Wells Fargo inquiries were resolved.

Additionally, Biden’s company received a $3.5 million wire transfer from Elena Baturina, the widow of Russian oligarch Yury Luzhkov, the former mayor of Moscow. The circumstances of those payments remain unclear to this day.

We are currently enmeshed in a tense geopolitical situation with the Ukraine–Russia war—a conflict that was entirely preventable. As recently as December 2021, Joe Biden held out NATO membership to Ukraine, as did his secretary of state, Antony Blinken. Defense Secretary Lloyd Austin went even further, saying the door was open to Ukraine for NATO membership, during an October 2021 trip to Ukraine.

Those false promises, sure to provoke Russia, lay in stark contrast to early warnings from Biden’s own CIA director, who had previously stated that NATO membership for Ukraine was the “brightest of all red lines” for Russia.

To make matters worse, in November 2021, the Biden administration offered Ukraine a charter on strategic partnership. The charter, replete with anti-Russian rhetoric and various promises to Ukraine, was sure to enrage Russian leadership further. Notably, the Biden administration chose to use the provocative term “charter,” which implies the granting of rights, as opposed to the more neutral term “agreement.” In reality, Biden’s use of the term charter was effectively a means of creating an unofficial treaty without having to go through Senate approval, as is normally required.

Now, in the midst of a conflict with no easy resolution, NATO, Ukrainian President Volodymyr Zelensky, and even the Biden administration have all admitted that NATO membership was never a viable possibility.

Now that the Washington establishment’s denial of the authenticity of Hunter Biden’s emails has been removed, the implications resulting from those emails raise serious questions about whether Joe Biden has been compromised by his past dealings. Biden’s public lies about his knowledge of his family’s entanglements only serve to heighten the urgency of receiving answers to these questions.

After the appointment of a special counsel and the forced recusal of Trump’s attorney general for a scandal fabricated by the Clinton campaign, how is it that no special counsel has been appointed in relation to the ongoing investigation into the Biden family? And why is Biden’s own hand-picked attorney general the one overseeing the investigation of alleged Biden family corruption?

Crucially, in light of the many implications from the validation of Hunter Biden’s emails and Joe Biden’s now-proven entanglements with Ukraine, how can he, as president of the United States, be entrusted to make foreign policy decisions regarding the Ukraine–Russia conflict?

And how can the corporate media, which has demonstrated their willingness to lie for political partisan gain, be entrusted to provide us with accurate coverage of the Biden investigation or the ongoing conflict in Ukraine?

Perhaps most importantly, how can our intelligence community—which interfered in both the 2016 and the 2020 elections by legitimizing the Clinton campaign’s fabricated claims of Russia collusion and blaming Biden’s laptop problems on a Russian plot—be trusted on its claims about Ukraine, our foreign policy, and our domestic affairs in general?