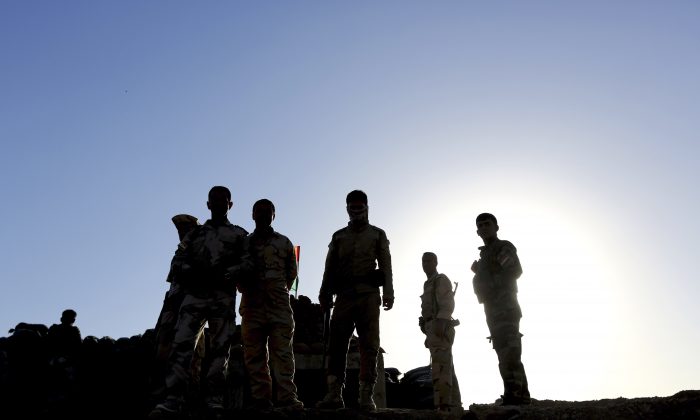 Kurdish Peshmerga fighters stand guard with their weapons as they patrol the front line with the Islamic State group in Kirkuk, 290 kilometers (180 miles) north of Baghdad, Iraq, Saturday, Sept. 27, 2014. The tense standoff frustrates many of the young soldiers, away from their families now for several months, even as other units make gains with the help of U.S. and French airstrikes. (AP Photo/Hadi Mizban)
Middle East

The first American soldier to be killed in Iraq since 2011 was during a mission to free approximately 70 hostages who faced imminent execution by ISIS terrorists, American officials confirmed. The raid, which took place early Thursday morning local time, raises questions about whether the United States contradicted its “no boots on the ground” mandate.

The operation calls into question the mission of Operation Inherent Resolve authorized by President Barack Obama last year to conduct targeted airstrikes against the Islamic State in Syria and Iraq (ISIS).

At the time, Obama stressed that no ground troops would be sent in to fight.

Since it’s the first mission that has resulted in the death of an American solider, it’s sure to raise questions about whether Obama’s mandate was violated. The raid is believed to be the first launched inside Iraq since American troops returned to contain ISIS, which took over swaths of northern and western Iraq starting in June 2014.

There have been a number of conflicting reports about who the actual rescued hostages were.

Pentagon officials refused to call it a combat mission, saying it was a “unique situation” part of the U.S. effort to “train, advise, and assist” Iraqi forces.

Department of Defense press secretary Peter Cook told reporters on Thursday that U.S. forces can “protect against the loss of innocent life” during their support role in Iraq. Meanwhile, U.S. forces have “the right to defend themselves.”

Still, questions remain over why American officials decided to take part in a potentially risk operation to rescue hostages when ISIS has killed thousands of civilians. Cook explained that even though U.S. intelligence officials didn’t know who the hostages were, their lives were in imminent danger.

“People at this facility believed their lives were in danger and would be executed in a matter of hours,” he told reporters.

There have been a number of conflicting reports about who the actual rescued hostages were: Iraqi fighters, Kurdish fighters, or a mix of both. Cook said U.S. officials didn’t know.

When he was questioned about whether the United States has carried out previous missions against ISIS without notifying the public, Cook said he “would not suggest that this [the hostage rescue] is something now happening on a regular basis.”

When questioned about who called in the raid, he said a “close partner” asked the United States to partake to “try and save lives.” After further questioning, he said the raid supports U.S. partners in the war against ISIS, which is in the interests of national security. More than 20 members of the Iraqi Security Forces were freed in the raid.

“This was a successful operation, regrettably, as it resulted in the loss of a U.S. service member,” Cook said.

The approval for the operation came from Gen. Lloyd Austin, commander of U.S. Central Command, and the White House was notified beforehand, he said.

The hostages were freed from a prison in Hawijah, 30 miles southwest of Kirkuk, with Kurdish Peshmerga forces taking the lead. The United States is the only coalition military force in Iraq with the capability to carry out such a rescue mission.

According to the Kurdistan Region’s Security Council, the United States provided a helicopter “and accompanied Iraqi peshmerga forces to the compound” before obtaining intelligence about ISIS.

The U.S. military formally withdrew from Iraq at the end of 2011, a move touted by Obama during his re-election campaign in 2012. Since then, there have been eight U.S. noncombat deaths.

The several thousand troops currently stationed in Iraqi are there to train and advise, not to directly engage in combat missions.

However, when ISIS took over Mosul and Iraq territory in July 2014, the Pentagon shifted its mission in Iraq to retrain Iraqi security forces. The several thousand troops currently stationed in Iraqi are there to train and advise, not to directly engage in combat missions, U.S. officials previously stressed. During the initial phase of the air campaign against ISIS, military officials said there was a policy of no “boots on the ground.”

“I think we always have to guard against mission creep, so let me repeat what I’ve said in the past,” Obama said in June 2014. “American combat troops are not going to be fighting in Iraq again.”