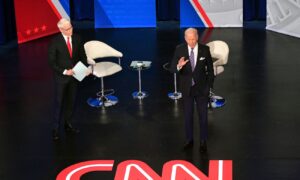 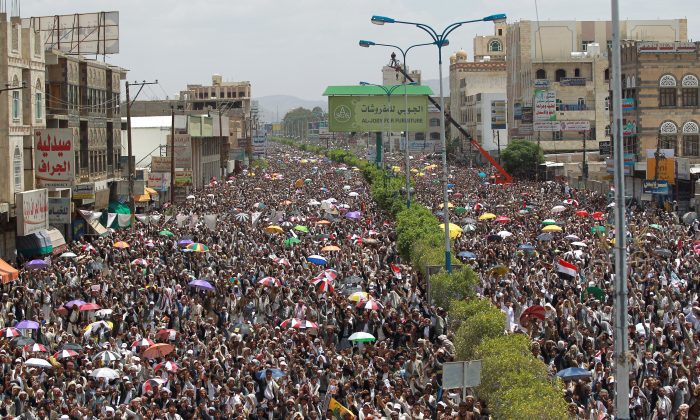 Supporters of Shiite Zaidi rebels gather during a demonstration organized by the Shiite movement to demand the government to resign on August 22, 2014, in the capital Sanaa. The Zaidi Shiites, a minority in mainly Sunni Yemen, form the majority in the northern highlands, including the Sanaa region and strongly oppose the government's plans for a six-region federation, demanding a single region for the northern highlands and a greater share of power in the federal government. (Mohamed Huwais/AFP/Getty Images)
Opinion

As the world’s attention was riveted on the lightening conquests of the Islamic State in Iraq, Yemen’s al-Huthi movement made an equally stunning but largely unnoticed military advance on Amran Governorate and captured the provincial capital, Amran, in July. The fall of Amran has extraordinary political significance: The al-Huthi advance dislodged the al-Ahmar family’s grip on the leadership of the Hashid tribal confederation, a central political pillar of the Yemeni Republic since 1962, and threatens the survival of the Islah Party itself.

During the capture of Amran, the al-Huthi destroyed the 310 Armored Brigade, which was allied with General Ali Muhsin, who, along with the al-Ahmar family and a group of Muslim Brotherhood leaders, are the heart of the Islah Party.

The fall of Amran is even more stunning in light of what appears to be complicity by President Abd Rabbuh Mansour Hadi. Since January, al-Huthi fighters have been making steady progress on the ground, alternatively buying and coercing new tribal alliances, defeating military units, and strategically using the politics of the transitional period in Yemen. The al-Huthi movement was party to Yemen’s famous National Dialogue Conference and it is included in formal political discussions about the future of Yemen. Over the last six months, a pattern emerged: al-Huthi fighters would make incursions into new territory, President Hadi would send a delegation to negotiate a settlement, and the al-Huthi leadership would exploit the settlement to advance further its control of northern Yemen. President Hadi appears to be allowing the al-Huthi advances to hurt the Islah Party as part of a major reshuffling of the political landscape in Yemen.

Abd Wahhab al-Ansi, Secretary General of the Islah Party, argued that the al-Huthi advance was due either to incompetence in the military under President Hadi or to treason.[1] Most observers acknowledge that the Yemeni military is so riddled with internal divisions that a coherent command structure is impossible to maintain. However, the events in the final hours of the fall of Amran suggest not simply chaotic military incompetence but rather a quite intentional and planned shift in power within the Yemeni military and politics.

For weeks the al-Huthi had been battling Yemeni military and Islah supporting tribal fighters around Amran in order to control the main entrances to the city. Hadi repeatedly brokered one ceasefire after another, all of which were violated by al-Huthi fighters without repercussions and all of which gave them further military advantage. On 8 July 2014, the military planned a major operation to clean the city of al-Huthi fighters at the same time as President Hadi’s security officials were in negotiation with the al-Huthi leadership to broker yet another ceasefire. An agreement was reached to stop the fighting and turn Amran’s main military base over to a police force until a new unit of the Yemeni could replace the current unit. The al-Huthi fighters had achieved their objective—removal of Yemeni military units allied with Islah.

The reinforcements from Sana’a were ordered to return to barracks, and inside Amran itself, General al-Qushaibi gave orders for his men to withdraw. However, the al-Huthi fighters took advantage of the ceasefire and poured into the city. Apparently, after assistance from Hashid tribes allied with former president Saleh, Huthi fighters burst into the headquarters of the 310 Brigade and executed General al-Qushaibi, a close associate of Ali Muhsin.[2] The killing of al-Qushaibi was in part a revenge killing for the death several years earlier of Hussein al-Huthi, brother of the current al-Huthi leader, Abd Malik, and a stark message to Ali Muhsin that the al-Huthi militants were in easy striking range.

President Hadi has consistently maintained that no legitimate group need resort to arms because the new Yemeni state allows all Yemenis to achieve their goals through a peaceful political process. Hadi’s words are directed toward the al-Huthi movement and al-Qaeda, the two organizations in Yemen challenging the state with force of arms, although al-Qaeda does not have anywhere near the capabilities of Ansar Allah, the al-Huthi organization.

Nevertheless, President Hadi did not appear too upset with the collapse of the al-Ahmar leadership of Hashid and the reversals of Ali Muhsin’s military units, and incomprehensibly, the al-Huthi fighters were able to leave Amran with the weapons of an entire armored brigade without resistance. President Hadi toured the city shortly with a large contingent of the government cabinet, promising to rebuild physical infrastructure and restore state institutions, as if to say that all is well now.

Meanwhile in Sana’a, Ali Muhsin very publically presided over the return to Sana’a and burial of the body of al-Qushaibi. President Hadi was absent from the ceremonies, even though al-Qushaibi was a long serving, high-ranking military commander. What is clear is that the Islah Party, which had been poised to take a commanding electoral victory in Yemen’s post-transition elections, is now struggling to survive.

What is even more extraordinary about these events is that Islah was, in many ways, the heart of Saudi influence in Yemen. The foundations of Islah lie in the Saudi spread of Wahhabism in Yemen and the Saudi fight against communism on the Arabian Peninsula in the 1970s and 1980s. In the 2000s, Islah was Saudi’s front line against the al-Huthi movement because the Saudis saw the al-Huthi as a new Hezbollah, Iranian military and political power located on Saudi Arabia’s vulnerable back door. Suddenly, Saudi Arabia put Islah on the list of terrorist organizations: Islah contains an element of the Muslim Brotherhood that the Saudis see as an enemy in the region, and the US-backed President Hadi allows Iranian backed al-Huthis to make military and political gains in Amran.

The Gulf Initiative that allowed Yemen’s elites to back away from civil war in 2011 was in many ways an elite pact that allowed Islah a much larger role in ruling the country. In 2012, when the Gulf Initiative took effect, the transitional government was effectively half Islah and half General People’s Congress, the party of former President Saleh. The military events in Amran indicate that the balance of power on the ground in Yemen is shifting, and the regional politics—Saudi and American fears of al-Qaeda and Iranian hands in Yemen—seem also to have shifted. Islah appears to be the loser in the current reshuffling of the political deck, but the new winners have yet to show their faces.