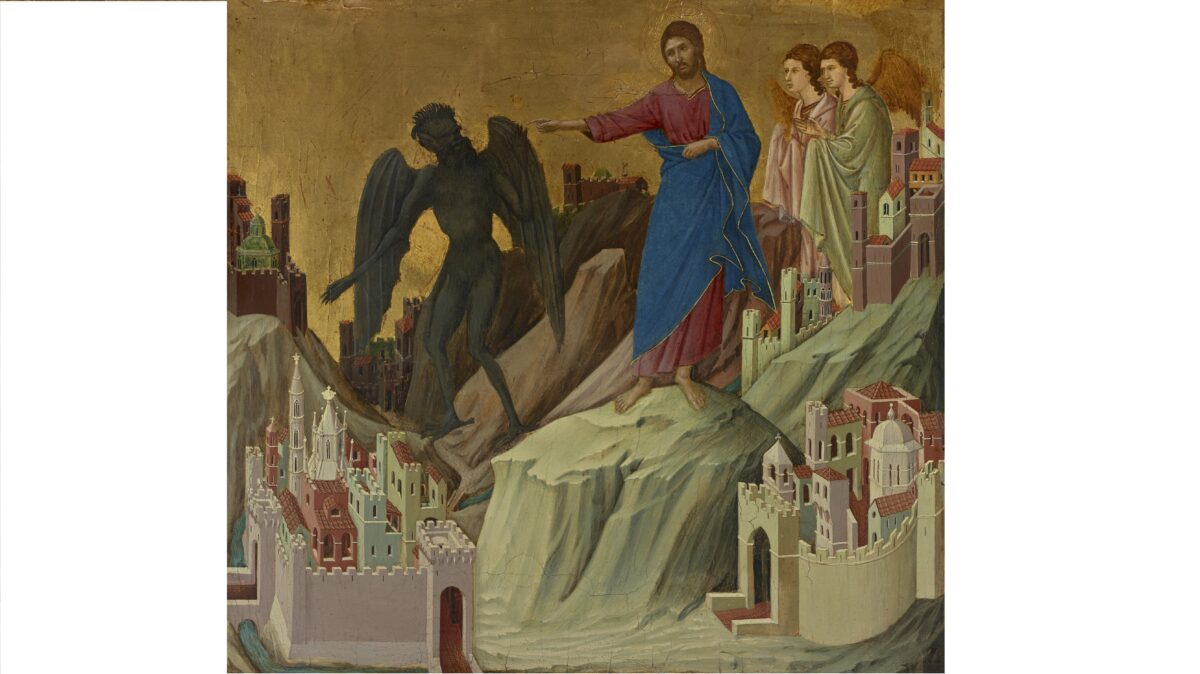 "The Temptation of Christ on the Mountain," between 1308 and 1311, by Duccio di Buoninsegna. (Public domain)
Arts & Tradition

The Fall and Rise of Men and Women

Art exploration for the young and young at heart
BY Andrea Nutt Falce TIMEApril 20, 2022 PRINT

This world is in a fight between good and evil. Man has been in the struggle since his beginning. Cultivating the clarity to discern between truth and falsehood is half the battle; human beings are given the opportunity to learn through experience and to choose wisely. As instinctively as a child fears the dark, mankind recognizes the threat of evil lying in wait. Since the world is rife with pitfalls and traps, it’s not enough to stumble upon the good by happy accident. Living a virtuous life requires grace and the deliberate exercise of a well-honed free will.

The biblical story of Adam and Eve told, printed, and painted for millennia is a testament to the great struggle of man. Though modern men and women may be tempted to see themselves as evolved beyond their ancestors, the basics of the human condition remain the same: We’re born, we live, we die, and in between, we get to choose. In hindsight, history often proves the rightness or wrongness of men’s choices, actions, and ideas.

The story of Adam and Eve offers ample opportunity for such reflection. Who doesn’t cringe at the terrible choice of the first man and woman—a couple of curious bites of an apple, traded with being allowed to stay in the Garden of Eden, with all its delicious fruits and paradise on earth? What the devil peddled just wasn’t worth it.

It began with the most insidious scenario. In a susceptible moment, an evil being succeeded in pitching the deliciousness and desirability of bitter disobedience. The snake didn’t make the fruit in the Garden, and he couldn’t offer a better version of what wasn’t his in the first place. He could only suggest enmity, a twisted and tempting lie. To this day, too many of us believe the lie. The story of Adam and Eve resonates because we are all susceptible to the suggestion that the devil has something more sumptuous to offer. Yet he’s not the author of creation, he didn’t make life, and he can’t make anything better. Evil can only mimic, distort, and destroy. Throughout human history, unoriginal as he is, the devil repeats the same old playbook.

Satan has been recognized and represented in the world and in paintings as long as man’s been working. In early Christian works, he was depicted with a fairly humanlike form, often as an old man. When he is humanoid in description, artists often include wings as a symbol of his demonically spiritual nature. Throughout history, men have understood the demonic as lying in wait, working through temptations or distortions in worldly logic to influence the decisions of mankind. They also seemed to understand that evil didn’t always look awful on the surface; it could come in a superficially persuasive form. In Tolkien’s “The Lord of the Rings,” Frodo Baggins says, “I think a servant of the enemy would look fairer and feel fouler.”

Centuries before Tolkien wrote those lines, Titian’s painting, “The Fall of Man,” created around 1550, presented a fascinating view of the devil. The creature looks almost pleasing, like a cute cherub. Chubby cheeks and a soft meadow of curls conceal only little horns. The babyish figure fixes his eyes on Adam even as he hands a round fruit to Eve. The artist cleverly places a tree like a division between the first couple, and only behind the tree—almost disguised as a branch—is a serpent’s tail revealed where the cherub’s lower body ought to be. Used as a symbol for mischief and deceit, a fox rests contentedly at Eve’s feet.

Evil can be very subtle. For that reason, it’s most illustrative to look into a piece of art that gradually reveals the true nature of the devil, as it was only revealed to Adam and Eve in hindsight. Art history keeps something of a visual record of the human and spiritual fight between good and evil. Some of the most fascinating works to juxtapose the sides of the battle appear in Christian art. In Vasily Surikov’s stark depiction, “The Temptation of Christ,” a charcoal and chalk drawing created in 1872, light and darkness come into high contrast compared to the softness of Titian’s garden scene. The devil looms in livid aggression over Christ, who turns away, holding firm against temptation.

Scenes of the temptation of Christ make a strong comparison between Jesus and the original man, Adam. While Adam had been enjoying paradise and caved to the devil in his comfort, Jesus had just endured 40 days of fasting and refused the devil in spite of hunger and exhaustion. Why did Jesus spend 40 days in the desert? The lesson is important. Choosing the good requires exercise. Christ demonstrated that to have the strength to bear the cross, one must be strong in suffering, self-denial, and resistance to evil.

Religious art offers a rich pictorial guide. Scenes from the gospel passages pertaining to the temptation of Christ are many and various. Created in the early 1300s, Duccio’s magnificent “Temptation of Christ on the Mountain” offers a more obvious lesson. The great proportions of Christ and the devil describe spiritual size compared to lesser things of the world. The devil is a wicked-looking figure who is rejected, even as Christ rejects the kingdoms of the world.

The 16th-century Flemish miniaturist Simon Bening depicted similar scenes, more subdued in character. In one of them, the devil approaches Jesus with stones to be turned into bread. Satan appears as a plain old man, his true nature illustrated mainly in the appearance of pointed ears and bird-like, clawed feet. Bening’s devil in the desert reminds me of Titian’s cherub in the garden. While one is old, and one is young, each looks fairly benign on the surface and makes a seemingly innocuous suggestion. The option at hand, however, is really the choice between good and evil. Adam and Eve were persuaded to disobey God. Christ recognized the depravity of the offer and rejected it based on God’s law.

In ordinary experience, the choice between good and evil is rarely presented by an unveiled demon. Rather, it can be awfully subtle. There are voices tempting one to compromise or accept a little lie of convenience. Why suffer for the truth if you could placate the world and avoid persecution? In the words of Tolkien’s Frodo, “It would seem like wisdom but for the warning in my heart.”

Christ would turn water into wine at the request of his mother, but refused to change stones into bread to quell his own hunger and appease the devil’s wicked desire. Character is formed via daily decisions, often small and simple but with serious consequences for shaping the person one chooses to be.

Men and women have changed little from the original man and woman described in the Garden of Eden. We have more tools, and we need them, because our burdens have increased. Still, however tempted modern man may be to consider his developments superior to the men of old or lament his sufferings and victimizations as the greatest of all time, the core of virtue and vice remains the same. Pride is still pride, lies are still lies, and prudence still prudence.

It would only take a few hours tuned into television, radio, or internet news for one to realize we’re in the same old struggle. Evil enters in insidious forms and always tells lies. It remains for us to choose the goodness of truth.