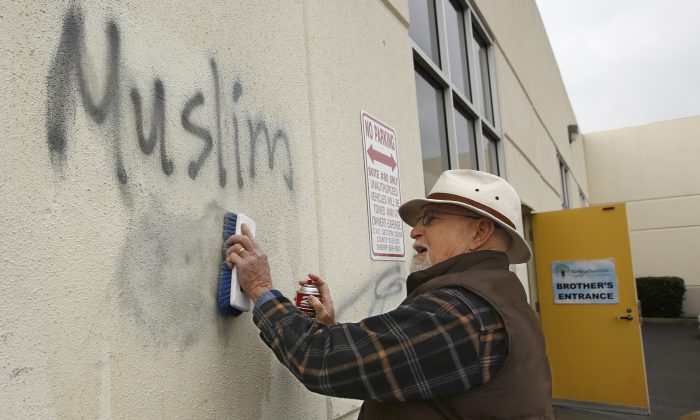 Tom Garing cleans up racist graffiti painted on the side of a mosque in what officials are calling an apparent hate crime in Roseville, Calif., on Feb. 1, 2017. (AP Photo/Rich Pedroncelli)
Viewpoints

According to the FBI, “hate crimes” are on the rise. The agency reported a 17 percent increase in such crimes in 2017 compared to 2016.

Coincidentally, the number of agencies that reported at least one hate crime within their jurisdiction also increased in 2017—by 15 percent.

The FBI described its efforts “to encourage reporting of hate crime statistics.” The news release said: “Next year, FBI personnel will provide training for law enforcement officers on how to identify bias-motivated incidents and report that data to the FBI’s UCR (Uniform Crime Reports) Program. Additionally, the Department of Justice launched a new hate crimes webpage, which has information for law enforcement on reporting incidents.”

Even PolitiFact, in its examination of whether there is a rise in hate crimes, said “the full picture is more nuanced,” citing a hate crime researcher who “said that some of the increase, especially in cities with very low numbers before, was the result of the more rigorous reporting.”

Kentucky State University professor Wilfred Reilly, author of a new book called “Hate Crime Hoax,” goes further than mere skepticism about an alleged rise in hate crimes. He said that most of the headline-grabbing “hate crime” stories were fake and called the 17 percent uptick an “aberration,” due to the increase in agencies’ reporting.

“Almost all of that surge is due to the simple fact that in 2017, the number of police departments reporting hate crimes to the FBI increased by 1,000,” said Reilly, according to a Detroit News opinion piece. “The surge narrative,” he insisted, “is pretty dishonest.”

The Smollett case represents just one recent hate crime hoax. For his book, Reilly examined 409 fake hate crimes that garnered media attention in the past five years. “In major cases, almost all of them have been hoaxes,” he wrote. “The number of hate crime hoaxes actually exceeds the number of convictions. The majority of these high-profile incidents never happened.”

If Reilly is right, the rampant news reports of the “rise” in hate crimes is a stunning example of what President Donald Trump calls “fake news.”

Many media outlets, in 2013, reported on something known as the “knockout game,” where unsuspecting whites walking on the street were approached, often from behind, and punched in the head—reportedly by young black men. The goal, as the name suggests, was to secure a “knockout” of the whites with a single fist blow.

But much of mainstream media dismissed the idea as “fake news,” attributing the notion of a rise in “knockout games” to the ravings of conservative media driven by anecdote.

The New York Times, in an article entitled “Police Unsure if Random Attacks Are Rising Threat or Urban Myth,” expressed its cynicism about any trend or rise in such black-against-white “knockouts.” The Atlantic sniffed, “It’s a two-decade-old rarity that suddenly became a media sensation.”

NPR was equally dismissive. “Framing it as a game gives it a hook for the news media,” it said in November 2013, “but we already have a name for this type of thing: It’s a random street assault, a terrible phenomenon, but not a new one. … As Chris Ferguson, a psychologist who specializes in youth and violence, told the Riverfront Times, ‘For some reason, everything involving teens gets called a game, no matter how little play behavior has to do with the motives.'”

Los Angeles Times columnist Robin Abcarian called the knockout game stories “part of the ongoing demonization of black teenagers.” Abcarian identified the real villains behind what she considered a phony narrative as “conservative voices who stoke racial animus for fun and ratings.”

As for the “knockout game,” much of the media was skeptical. As for the so-called surge in hate crimes in the era of President Donald Trump, where is the mainstream media’s cynicism when you need it?