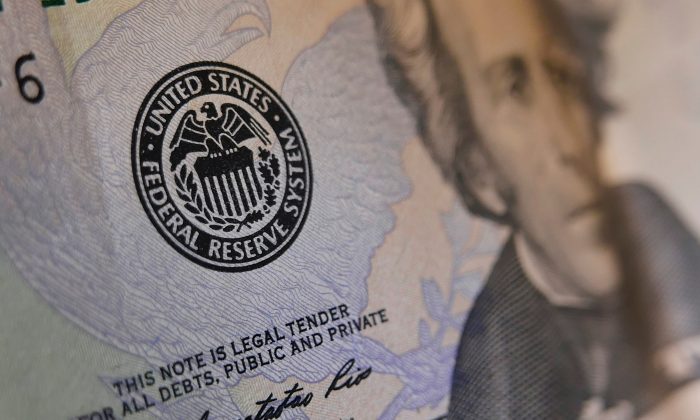 The seal of the Federal Reserve on a U.S. banknote. (Mandel Ngan/AFP/Getty Images)
Business Columnists

The Failure of Central Banking: Politics

The view was generally held that centralization of banking would inevitably result in one of two alternatives: either complete government control, which meant politics in banking, or control by ‘Wall Street,’ which meant banking in politics.

The idea of the central bank was born in the Middle Ages, when failures of the largest merchant banks of that era, founded by the Bardi and Peruzzi families, shocked the Italian City-State of Florence in 1343 and 1346. These financial crises gave birth to the idea that the commercial banking sector would need a “liquidity backstop,” i.e., an entity that could lend to private financial institutions in trouble. This was the original aim of central banks: to act as piggy banks for solvent commercial banks with temporary liquidity problems.

The first central bank that resembled the modern ones emerged in 1609, when the Dutch empire created an exchange bank, Wisselbank, to convert foreign coins into domestic currency. The central bank of Sweden, the Riksbanken, was created in 1668, and the Bank of England (BoE) in 1694. These were mostly servants of rulers and governments. But the really big twist came in 1914, when the U.S. Federal Reserve Bank was created. Its creation was mired with worries that it might socialize the economy.

To calm these fears, the power of the Fed to issue legal tender (currency) was restricted by both the “real bills doctrine” and the gold standard. The real bills doctrine stated that the Fed could only extend credit and thus increase the supply of money against collateral that already had established value through a “commercial transaction.” This meant that the value of the collateral could not be in the future effectively banning, e.g., the monetization of the federal debt. The regional Reserve Banks, not the Federal Reserve Board, were also given the control of the creation of central bank credit or money.

The real bills doctrine slowly faded away in the 1920s. The Banking Act of 1935 ended the autonomy of the Reserve Banks and the Board received the authority over open-market operations. The convertibility of the U.S. dollar to gold was (totally) abandoned in March 1973.

As mentioned before, during the tenure of Alan Greenspan, the Fed started to bail out the market players. However, during the leadership of Jerome Powell, the Fed has become a full-fledged political player, when it decided to save the municipal, Federal, and corporate sector through its “Corona bailout” during the Spring of 2020. Alas, the Fed politicized and socialized the economy.

An increasing number of independent central banks in Europe have been replaced by the European Central Bank (ECB), which was created in 1998 and started operations in 1999 with the introduction of the euro. It is probably the formally most independent central bank in the world, being forbidden to take instructions from any E.U. or other public institution. Its primary objective is price stability, but it may support other E.U. policies–for instance, financial stability–if this does not conflict with the primary objective. The ECB is also now closely involved in banking supervision, creating an obvious and permanent conflict of interest with monetary policy.

The ECB essentially operates a fixed-exchange rate system for E.U. members with greatly different economies. Its monetary policy will always be inappropriate for some member states which should correct for this with national fiscal or other policies. If they do not, the result is normally either economic overheating or a downturn. Of course, the true independence of a central bank is tested when politicians demand monetary policies to soften the consequences for countries not having implemented correct national economic policies.

During its first active decade the ECB helped to radically reduce interest rates in the E.U. member states with previously low creditworthiness in the markets. The main reason for the convergence of E.U. member interest rates was, however, that markets became convinced that joint responsibility for repayment of debts was politically inevitable. The result was overheating and a very strong credit expansion in these countries, which ended in a financial collapse as first the U.S. real estate sector and then Greece’s sovereign funding showed that credit had been extended based on wildly inaccurate risk assessments.

The financial crisis during its second active decade transformed the ECB into a political actor. The essential change was the decision to, in practice, buy bonds of member states which otherwise could not have funded themselves at low cost. Purchases were sometimes accompanied by confidential demands on which economic policies to implement. As the crisis of government finances abated, the ECB nevertheless continued buying public and private bonds to keep the euro area intact despite members’ divergent economies. This kept interest rates low particularly for highly indebted member states (mostly in Southern Europe) and ensured funding for selected private enterprises.

This transformed the ECB into an essentially fiscal actor with very few political constraints and a virtually unlimited budget. The ECB also took a visible direct political role in 2015, when it coerced the Greek government by not extending the Emergency Liquidity Assistance to Greek banks. It’s the job of a central bank to support the banking sector, not to drive them into a crisis, but this is what the ECB did.

Legal challenges to ECB’s new role (particularly from German opponents) have been struck down by the European Court of Justice. This indicates that the limits of ECB powers are set primarily by the central bank’s ability to, somehow credibly, argue that its policies do link to its constitutional tasks. Its growing influence may also have created pressure for the present discussion on creating stronger centralized governance in the E.U.

So the idea of central banks started from a “liquidity back-stopper” of the financial system 700 years ago,  but they have mutated into powerful actors on the economic and political stage. The ability to conjure nearly limitless amounts of money seems to, eventually, tempt central banks to adopt policy and/or political targets that are either impossible or unwise to pursue. This has happened several times in history, and now we are there again.

Also this time the costs of the “politicization” of central banks are likely to be dire. Economies and governments are dependent on central bank funding as maybe never before. Central banks have commercial risk on their balance sheets in amounts never seen before. At the same time, the value of money and financial assets critically depend on the continued support of and public trust in central banks. This unusual dependence on central banks is the result of central bankers losing sight of their primary role and becoming politized.

When the financial system finally crumbles, we need to rethink the role of central banks. At the very minimum, their role should be severely and credibly limited, but how it could be done, as it has been tried and failed several times?

Thus, we need also to be able to think the unthinkable, that is, a world without central banks.

This article was co-written with Dr. Peter Nyberg. We thank Dr. Heikki Koskenkylä for comments.