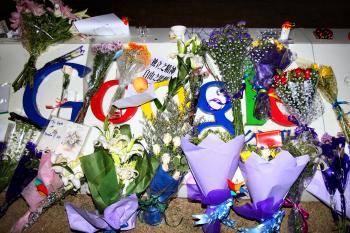 THANKS: The Epoch Times News Group joins the people of China in thanking Google for ending its censorship of search results. A card, a letter, and flowers are placed on the Google logo at its China headquarters building on March 23 in Beijing, China. (Feng Li/Getty Images)
Viewpoints

The Epoch Times News Group, which is the media outlet most frequently blocked by the Chinese communist regime, compliments Google on its decision to stop censoring search results.

On March 22 Google stopped its search engine service in mainland China, redirecting Chinese users to its Hong Kong site. In reply to the Chinese regime’s request to filter its search results comprehensively, Google insisted it would leave China rather than censor the Internet any longer. Google—one of the major global Internet companies—has lived up to its original motto, “Don’t Be Evil.”

Ever since the founding of the Epoch Times News Group 10 years ago, we have consistently reported news that the Chinese regime makes every effort to filter and block. We therefore are very appreciative of Google’s decision to stop cooperating with censorship.

The Epoch Times News Group believes that a free flow of information is as important to today’s society as air and water are to life. Human rights, equality, democracy, and freedom can only be realized by means of a free flow of information. Google’s defiant stance against Internet censorship and its upholding the principle of free, uncensored information are undoubtedly an act of great benevolence not only to all Chinese but to everyone around the world, a service of immeasurable value.

The Chinese communist regime has never ceased repressing supporters of free information. Google’s experience in China—being threatened by the regime and attacked by state-run media—is an epitome of the plight of Chinese people. Under the oppressive rule of the Chinese Communist Party (CCP), a hard road is still ahead for those seeking the free flow of information. In any case, the historic trend toward greater freedom of information cannot be reversed, nor can it be stopped. The Chinese netizens, independent media such as The Epoch Times, and international society will say “no” to the CCP’s attempts to do so.

More than 2,000 years ago, Confucius said: “A man of noble character remains composed and continues to follow principles even in a difficult situation; a villain, on the contrary, becomes flustered and would commit all kinds of wrongdoing.” Even when suffering the loss of money and harm to one’s practical interests, one must uphold principles. Freedom is not free. In the fight for freedom, there is a cost to pay. People will praise as pioneers those who are willing to pay that cost.

If Google with its technological prowess dedicates itself to the great undertaking of Internet freedom, we believe Google will blaze a new trail for Internet freedom. On behalf of all the staff of the Epoch Times News Group and our readers, we welcome Google to join us in the fight for information freedom. Together, we strive to spread the truth and say no to deceptive lies.