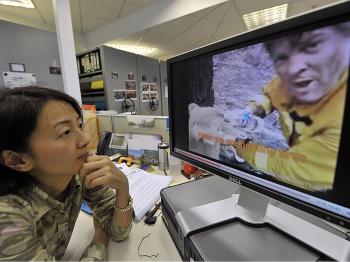 A woman watches a YouTube video in Hong Kong. Chinese YouTube clones will be heavily regulated by the regime. (Mike Clarke/AFP/Getty Images)
China

By Jason Ma
Print
Starting from March 2010, any would-be YouTubes operating in China without a permit will be shut down. Dec. 20 of last year was the final day multimedia Web sites could apply for a permit to operate in China, according to a notice by China’s State Administration of Radio, Film, and Television (SARFT). The agency said it would review the applications and issue permits to “qualified providers.”

The announcement was a death sentence for many video Web sites, even though they knew it was coming. Two years ago on the same date, SARFT and the Ministry of Industry and Information Technology (MIIT) jointly issued an order to regulate Internet video and audio service providers in China. The order required that, starting from Jan. 31, 2008, every Web site providing video and audio services needed to obtain a permit from SARFT. One of the conditions for obtaining a permit was that the Internet service is either fully or partially owned by the ruling Chinese Communist Party (CCP). This clause immediately put most of China’s video sharing Web sites at risk, since the majority of them were funded privately, including with venture capital.

Internet video sharing services started in China in the middle of 2006, inspired by YouTube. Investment in these sorts of Web sites exploded after October 2006, when the then one-year-old YouTube was bought by Google for US$1.6 billion. Investors all over the world poured tens of millions of dollars into China, dreaming of reproducing the YouTube miracle there.

Unfortunately, they ignored a technical detail: the fast expansion of multimedia Web sites could potentially undermine the CCP’s national Internet censorship system, which has cost the regime billions of dollars to build over the past decade. Current censorship technology can only effectively filter information presented in text; no reliable technology is available to automatically screen video and audio containing information the regime doesn’t like. For example, the current system is unable to figure out if a person doing mediation in a segment of video is indeed practicing Falun Gong, a spiritual practice persecuted in China since 1999. This is highly irksome to China’s censors.

The CCP initially took an ostensibly lenient posture towards Internet video sharing services, which was wishfully interpreted by investors as a green light. Unfortunately, it later appeared that the CCP’s initial silence was simply due to the slow and inefficient nature of Chinese bureaucracy. Because Internet video sites are a new form of multimedia service, it happened to fall into a crack of bureaucratic supervision. Conventionally, all Internet services were administrated by MIIT, while multimedia services, such as radio, film, and TV programs, were supervised by SARFT. Facing Internet multimedia services, both institutes initially fought for exclusive control over the new domain. On the surface, the fact that the order was issued jointly by both institutes suggests a compromise was successfully reached after the power struggle. Essentially, SARFT gained an upper hand in the fight, because they are the agency who finally gained the right to issue the permit.

SARFT, which is under the direct leadership of the panopticonic Central Propaganda Department, has been notorious for its iron-handed control of China’s media for decades. It regulates broadcasting activities, censors and approves all Chinese and foreign films, TV shows, and radio shows, plans television dramas, administers satellite television, and conducts annual inspections of television and radio stations, signing off on their annual certificate which allows them to operate. In this case the requirements set down in the order closely reflect its bullying style. Beside the requirement that every Internet multimedia service should at least be partially owned by the government, the order also specifies that the permit needs to be renewed every three years, and is subject to immediate suspension if any “illegal” content is found on the Web site. If this order was strictly enforced, little chance would be left for most of the existing video Web sites to survive in China.

Fortunately, (or unfortunately), Chinese governmental officials are not wont to diligently enforce laws, orders, and regulations, if those above don’t put pressure on them. This became the only hope for private investors who poured millions of dollars into the video Web sites. Knowing they had almost no chance to obtain a permit, many Chinese video Web sites simply continued to operate without one through 2008 and 2009. However, the order still indirectly caused some video Web sites to disappear over the two years, because of financial difficulty. Their cash-flow was broken as the uncertainty cast by the order scared away future investors.

From 2008 to middle 2009, as many had hoped, the order was enforced fairly loosely. China’s Internet users hardly felt any difference when enjoying video services. Meanwhile, SARFT had issued around 150 Internet multimedia service operation permits, almost all of to Web sites affiliated with state-run TV stations, newspapers, and magazines.

Things began changing toward the end of 2009. Over 200 video Web sites, including the popular video sharing Web site BTChina, had been shut down by SARFT. Following the massive crackdown, the deadline for applying for a permit was announced as Dec. 20, 2009.

The motivation behind SARFT’s sudden change of tune was revealed four days after the deadline. On Dec. 24, Chinese newspapers enthusiastically reported that China Internet TV, owned and operated by China Central Television (CCTV), the official mouthpiece of the Chinese Communist Party, would launch on Dec. 28. The CCP revealed plans to invest hundreds of millions of dollars in building the Web site as an international, multi-language Internet multimedia site, providing comprehensive video broadcasting and sharing services. With this regime-supported eight hundred pound gorilla entering the circus, it is high time for people to wake up from China’s YouTube dream.