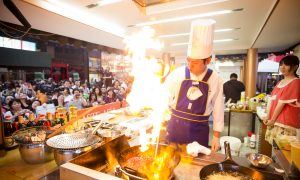 There is a buzz backstage, models donning hair pieces and taking turns with the make up artist. On the other side of a folded barricade, white islands of linen wait to be laden with some of the finest Chinese cuisine in the city. This is The Emperor’s Banquet.

Formally dressed chefs pose for a photo shortly before the room fills with an ocean of conversation. Wine glasses blossom with violet napkins that will soon be laid on laps and dabbed on mouths. Chairs in their best purple satin slip covers await guests that will eat five appetizers, a ten course meal and then dessert. The world’s richest culinary tradition is receiving its due.

It’s the second year NTD Television and the Epoch Times have hosted this event, a tribute to traditional Chinese cuisine aimed at putting this art form in its proper place on the world stage. Some of the best chefs in Toronto will cook and others will dine. This is food for foodies.

Soon finely dressed men and women come wave after wave, lapping up to their respective islands to wait briefly before the food arrives.

The first course that launches it all begins dramatically, the soundtrack of mission impossible playing as an army of waiters dressed in gold and black marches out. It’s suitably exciting and starts what will become a feast fit for kings and queens.

Oyster mushroom with vegetable melange, lightly battered grouper fish in a sweet and sour sauce, and papaya beef in a nest of crispy vermicelli.

The evening is rounded out with a mixture of entertainment.

Musicians take turns on stage playing classical Chinese instruments. First a celestial sounding guzheng, then an invigorating pipa, and finally the stirring sounds of the erhu.

Celebrity Chef Christine Cushing was present as a trailer for her new documentary series, Confucius was a Foodie, played. The show follows Cushing as she explores Chinese cuisine in North America.

The models emerge twice over the course of the night, taking a stately walk through the crowd in a Han Couture fashion show of splendid silk gowns and the dignified attire of China’s various dynasties.

The meal finishes with comfort food, a humbly presented but skillfully executed fried rice. Dessert comes in the form of a mango citrus sago and floral jello with goji berries.

Guests in black ties and evening gowns rise as the night completes and leave with smiles, chatting with new friends, collecting gift bags on the way out if they missed them coming in. One happy visitor leaves with the grand-prize of the lucky draw, a family of four cruise package.

Chinese food is often taken for granted. In every city, no matter how small, some enterprising Chinese person will open a restaurant. They are as common as the mom and pop dinner, making what is likely the richest culinary tradition in the world seem so common as be forgotten. Tonight was different. Tonight, Chinese cuisine was given the royal treatment. But tonight was only stage one.