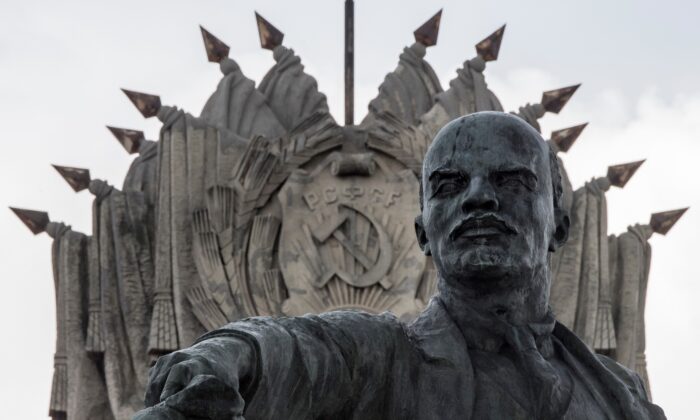 A sculpture of the founder of the Soviet Union, Vladimir Lenin, in front of the House of Soviets in Saint Petersburg, Russia, on June 25, 2017. (Mladen Antonov/AFP via Getty Images)
Viewpoints

The Delusions of a Marxist Professor

When it came to Adolf Hitler, the Viennese satirist Karl Kraus said that he couldn’t think of anything to say.

This sounds odd, first because Hitler was, and will remain, an inexhaustible subject for biographical and psychological speculation, probably beating Napoleon or Stalin in the amount already written about him, and second because Kraus wrote millions of words and had an opinion about almost everything else.

But one knows what Kraus meant.

“Whereof one cannot speak, thereof one must be silent,” wrote another Viennese, the philosopher Ludwig Wittgenstein, albeit in another context. The unspeakable is the largest subject of all.

I remember one of the first prisoners I met as a prison doctor. He had killed three children and then impaled them. Of course, it isn’t the place of a doctor to expatiate on the sins of his patients: The man had bronchitis and needed treatment, that was all.

But what, in any case, could anyone usefully say? Could one, for example, prove by syllogism that killing and impaling children was wrong, such that he would then reply, “Ah, I now realize that what I did was wrong and I promise that I will never do it again”? The very idea is absurd.

The other day, I had a discussion with a well-known Marxist professor whom I shall not name because it isn’t my intention to drag anyone’s name through the mud.

When I started reviewing books many years ago, I thought that destructive criticism would be fun. I have long since ceased to feel that way, though I still occasionally resort to it. Destructive criticism must pain the recipient, who is a human being after all, and I liked the professor.

I thought that he was probably a decent type, personally speaking. With his ideas, however, I wouldn’t want him in charge, but then I’m not sure that I want anyone to be in charge, much.

He was mild-mannered, and I couldn’t help thinking of him, no doubt wrongly, as a character out of a Joseph Conrad novel about revolution. Of more or less my own age, he said that he still hoped for a proper communist revolution, purified of deformations such as those of Stalin and Mao, which seemed to me about as realistic a hope as mine of one day playing cricket for England.

Perhaps a more apt comparison would be with St. Augustine, who prayed to be good, but not just yet: Revolution, yes, but not before he had paid off his mortgage and claimed his full pension.

The professor was an intelligent man, and probably cultivated, too. How is it possible, in the Year of Our Lord 2021, for such a person still to believe that, until the advent of Stalin, the Russian revolution was a good thing, to be emulated or repeated elsewhere?

How could anyone of his intelligence fail to realize that, although, as ever, there was much wrong with the world, attempts to put everything right at once by the implementation of petty intellectual schemes are fraught with danger, and have a history of mass slaughter behind them?

I think the answer must lie in the psychology of religion: when religious faith is replaced by a philosophy that prides itself on its rationality, it soon turns religious in the worst possible sense. It becomes an atheist theocracy.

Everything was known about the Soviet Union from the first. It’s simply not true that Solzhenitsyn revealed anything to the West that, in essence, was not, or couldn’t have been, known before.

I have, in desultory fashion for a number of decades, been collecting books about Russia and the Soviet Union from just before the Revolution until the Second World War, and while it is true that many of them are laudatory, with titles that now seem hilarious to us such as “The Soviet Union Fights Neurosis,” a very large number books of various genres, from essays to histories to memoirs to novels and short stories, were published that exposed the viciousness of Bolshevism from the very first—a viciousness that anyone with any imagination could have anticipated from Lenin’s literary style alone.

Leninist viciousness was a new and more thoroughgoing type that acted on the mind as a virus acts on a computer (viciousness, both actual and potential, is, alas, a constant of human history because of our flawed nature).

Solzhenitsyn was right about the difference between Macbeth, who from personal ambition killed people, but only a few, and the ideologically motivated mass killings of the Soviet Union and elsewhere—the difference being precisely in the effect of ideology.

But what was really different about Solzhenitsyn, apart from his literary talent, was that Western intellectuals were now prepared to believe what he said, whereas shortly before, they had rejected as mere propaganda evidence of a very similar nature produced by others.

It was so startling to meet someone who still believed a “pure” revolution could occur, and that such a person was teaching history, of all things, at a reputable, or at any rate reputed, university that, like Kraus confronted by Hitler, I could think of nothing to say.

I had no idea whether he still taught undergraduates, or whether in doing so he suppressed at least some of his views (as a judge is supposed to suppress his own private opinions), but I confess that the charge against Socrates, that of corrupting youth, came into my mind.

The sentence of hemlock, however, didn’t. As I said, I liked the professor, and by temperament (I cannot claim it as a virtue), I am a poor hater. I like the vast majority of people I meet.

Of course, corruption of youth can come about by many means, passively as it were rather than actively.

A few years ago, I gave a talk to students in Switzerland, I forget what about. The students were brilliantly intelligent, multilingual, and all very charming.

I discovered quite by chance that not a single one of them had heard of Solzhenitsyn, or indeed of any of his subject matter—and those students were of the infamous 1 percent of the population if anybody was.

The past meant nothing to them, and while I do not say that those who don’t remember the past are doomed to repeat it (there is no such fatality in history), it makes repetition more likely.