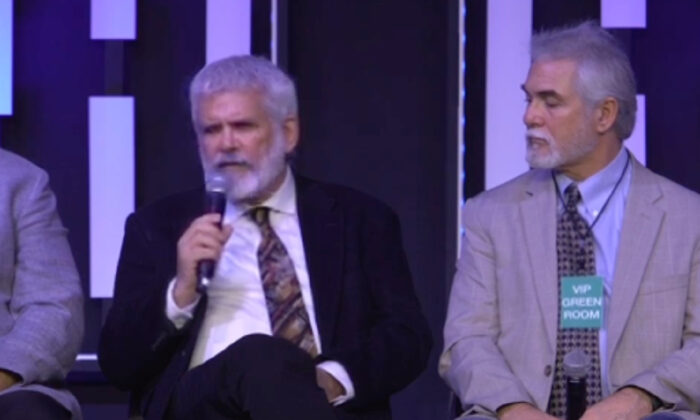 The Defenestration of Dr. Robert Malone

Dr. Robert Malone is a U.S. virologist and immunologist who has dedicated his professional existence to the development of mRNA vaccines.

In the 1980s, Malone worked as a researcher at the Salk Institute for Biological Studies, where he conducted studies on messenger ribonucleic acid (mRNA) technology. In the early 1990s, Malone collaborated with Jon A. Wolff and Dennis A. Carson, two eminent scientists, on a study that involved synthesization.

In fact, Malone is the father of mRNA vaccines. He has served as an adjunct associate professor of biotechnology at Kennesaw State University, and he co-founded Atheric Pharmaceutical, a company that was contracted by the U.S. Army Medical Research Institute of Infectious Diseases in 2016.

As you can see, Malone is no ordinary man. In fact, he’s a rather extraordinary man. Before embarking on a distinguished career in science, Malone worked as a carpenter and as a farmhand. Becoming a doctor was a lofty aspiration, but through hard work and determination, his dream became a reality. Over the course of three decades, Malone has established himself as one of the most competent people in the fields of virology and immunology.

Why, then, is he considered “a pariah” (in his own words) by so many of his peers? Why did Twitter recently suspend his account?

Malone is arguably the most qualified person in the world to speak on what we as a society should and shouldn’t be doing during the pandemic. Yet for reasons that will become abundantly clear, he finds himself ostracized, largely silenced, and cut off from the scientific community. Why?

“I am going to speak bluntly,” he wrote. “Physicians who speak out are being actively hunted via medical boards and the press. They are trying to delegitimize us and pick us off one by one.”

He finished by warning that this is “not a conspiracy theory” but “a fact.” He urged us all to “wake up.”

Sadly, many of us are still asleep.

In my research for this piece, it seems clear to me that Malone has been silenced, not because he’s some quack spouting nonsense, but because he challenged—and still challenges—the overarching narrative about vaccines and the lethality of COVID-19.

Malone was recently interviewed by Joe Rogan. For the uninitiated, Rogan is the host of one of the most influential podcasts in the world. At one point during the three-hour interview, Malone referred to Dr. Anthony Fauci as Tony Fauci, a man he knows personally. Malone, in other words, knows where all the skeletons are hidden. The same is true for Dr. Peter McCullough, another world-renowned expert who has appeared on Rogan’s podcast.

Prior to writing this piece, I consulted both Malone and McCullough.

Over the course of the past 18 months, Malone has been painted as some kind of anti-vax fringe scientist, a man of questionable merit who’s spouting nonsense.

Well, he’s not. Malone happens to be vaccinated. All he has ever asked for is the chance to have frank and honest discussions on vaccines.

In his own words, vaccines have “saved lives. Many lives.”

“But it is also increasingly clear that there are some risks associated with these vaccines,” Malone said. “Various governments have attempted to deny that this is the case. But they are wrong. Vaccination-associated coagulation is a risk. Cardiotoxicity is a risk. Those are proven and discussed in official USG communications, as well as communications from a variety of other governments.”

Malone isn’t a crazed conspiracy theorist: He’s a man who’s intimately familiar with the benefits and the risks of vaccines. He’s a proponent of informed consent. Perhaps before letting someone inject a vaccine into your body, you should be fully informed of the risks involved, he says. He isn’t an unreasonable man.

Nevertheless, in this age of faux outrage and fabricated storylines, society needs a fall guy, a boogie man, a sacrificial lamb. Malone fits the bill. He knows too much. It’s much easier to discredit a decorated physician—who challenges the overarching narrative—than it is to actually debate him.

The story goes deeper. In 2019, the BBC established the Trusted News Initiative (TNI), a partnership that now includes organizations such as Facebook, Twitter, Reuters, and The Washington Post. We’re told that it was established to tackle “disinformation in real time.” TNI was ostensibly designed to wage a war on “fake news.”

Upon closer inspection, however, it appears to have been designed to promote very specific narratives and to silence any dissenting voices, such as Malone’s. Instead of trusting the TNI, we should question the motives of its members.

After all, The Washington Post recently published a piece asking people to stop criticizing President Joe Biden. The message is clear: Stop being mean to the president, even if the president is being mean to you (on more than one occasion).

Then, there’s James C. Smith, chairman of the Thomson Reuters Foundation. He sits on the board of directors for Pfizer, a company that’s responsible for the creation of vaccines with questionable efficacy and that has a history of manipulating data. In short, Pfizer is a company with a questionable reputation. Nevertheless, Pfizer Chief Executive Albert Bourla was recently named CNN’s Business CEO of the Year. Make of that what you will.

When one thinks of TNI (and the mainstream media in general), various terms instantly spring to mind. “Objectivity” isn’t one of them. “Highly compromised” and “conflict of interest” do come to mind, however.

Speaking of objectivity, or the lack thereof, in August 2021, The Atlantic ran a much-cited hit piece on Malone, which was high on accusations, but low on actual evidence. It attacked his character and credibility—repeatedly. Rather intriguingly, the article, like all of The Atlantic’s COVID-19 articles, was funded by the Chan Zuckerberg Initiative and the Robert Wood Johnson Foundation.

The former is an organization established and owned by Facebook founder Mark Zuckerberg and his wife, Priscilla Chan. The Robert Wood Johnson Foundation owns stock in Johnson & Johnson, a company whose vaccine has been associated with the development of blood clots—the very thing Malone has been warning us about for the better part of two years.

People might scoff. But contrary to popular belief, democracy doesn’t die in darkness. It dies in broad daylight. Its death is slow and protracted, one by a thousand cuts rather than by one fatal stab.

As author Steve Levitsky once wrote, democracies don’t often die at the hands of military generals, “but of elected leaders—presidents or prime ministers who subvert the very process that brought them to power.”

“One of the great ironies of how democracies die is that the very defense of democracy is often used as a pretext for its subversion,” he wrote. “Would-be autocrats often use economic crises, natural disasters, and especially security threats—wars, armed insurgencies, or terrorist attacks—to justify antidemocratic measures.”

Apply these lines to the pandemic, and Levitsky’s words carry more weight than ever before.

In the United States, one must not question the efficacy of masks, vaccines for kids, the logic (or lack thereof) of lockdowns, or the unconstitutional nature of vaccine mandates. What about the little matter of vaccine breakthrough deaths? Don’t ask any questions.

But wait, if science can’t be questioned, doesn’t this make it propaganda? Hush now. Don’t you love America? Don’t you want people to live, rather than die? Then shut up and get the vaccine, then the booster shot, then the booster-booster shot. We, the arbiters of truth, know what’s best for you. Somewhat ironically, these self-appointed arbiters of truth spout no shortage of lies.

Is it any surprise, then, that more and more Americans continue to lose faith in the mainstream media and the government? Yet here we are, being condescended to by the likes of CNN’s Don Lemon and MSNBC’s Nicolle Wallace. Worse still, we’re supposed to take orders from Fauci, a man who supposedly represents science, yet goes out of his way to smear scientists. Why would a man of science attack the very thing that he’s supposed to represent?

According to numerous reports, Fauci has repeatedly deceived the American people. It’s important to remember that Fauci is, first and foremost, a talking head for the U.S. government. In reality, he’s a politician with a medical degree.

To quote the author Gillian Flynn, the author of “Gone Girl”: “The truth is malleable; you just need to pick the right expert.”

Who better than Fauci, a highly qualified individual with his own fan club? But don’t be fooled. Fauci might act like he answers to no one, but he does. He answers to the U.S. government. Who, then, does the government answer to? Big Pharma, it seems.

In 2019, the Roosevelt Institute published a fascinating report, “The Cost of Capture: How the Pharmaceutical Industry has Corrupted Policy Makers and Harmed Patients.” The report outlines the many ways in which the pharmaceutical industry has shaped policies through corporate capture. This is a phenomenon that sees private industries use their significant financial and political influence to manipulate a state’s decision-making apparatus. The report warned about the dangers of lobbying and of deeply flawed medical research.

Interestingly, but not surprisingly, YouTube has removed the Joe Rogan episodes featuring Robert Malone and Peter McCullough. Why? Because when it comes to viruses and vaccines, these are among the most notable and accomplished experts in the world. They appear to know things that the government doesn’t want us to know. Additionally, Google, the owner of YouTube, appears to be closely involved with the U.S. government.

What we’re left with is the equivalent of a digital dictatorship, with even the most qualified people being silenced, ostracized, and, in some cases, defenestrated. Robert Malone is a wise man, an honest man, and a highly credible man. The grief that has come his way—and continues to come his way to this day—is unwarranted. But as he knows only too well, this is the price one must pay for challenging the unholy trinity.