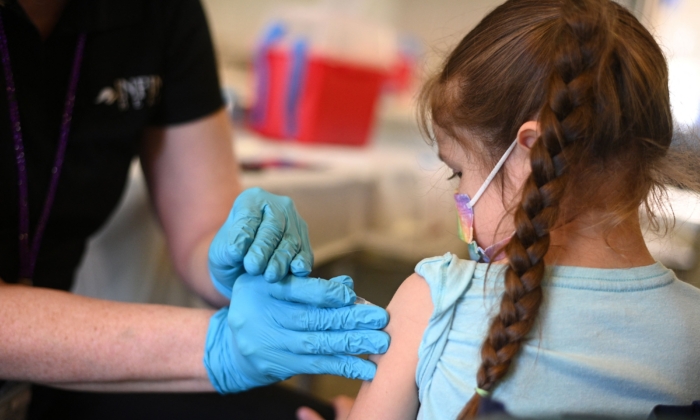 A nurse administers a pediatric dose of the COVID-19 vaccine to a girl at a L.A. Care Health Plan vaccination clinic at Los Angeles Mission College in Los Angeles, Calif., on Jan. 19, 2022. (Robyn Beck/AFP via Getty Images)
By Naveen Athrappully

Mandating COVID-19 vaccines and related passports have had damaging political, legal, and socioeconomic effects; while also destabilizing the integrity of science and public health, according to new research published at the BMJ Global Health, a global online health journal based in London.

Several countries have implemented vaccine mandates and passports to manage the COVID-19 pandemic, with some introducing them through the democratic process while others imposing them via emergency declarations, said the May 26 research report titled “The unintended consequences of COVID-19 vaccine policy.”

Vaccine passports risk “enshrining discrimination” into law based on the “perceived health status” of individuals, even against those who might not be vaccinated but have recovered from prior infection and are generally at lower risk of a COVID-19 infection. Also considered is the data privacy and security aspect of vaccine passports.

“Having set these population-wide passport precedents, it is conceivable that they could be expanded in the near future to include other personal health data including genetic tests and mental health records, which would create additional rights violations and discrimination based on biological status for employers, law enforcement, insurance companies, governments, and tech companies,” the report warns.

It blamed “center and left politicians” for using “anti-vaccination fervor” among groups on the right to progress their own agendas.

In the United States, pro-vaccine advocates have equated those who protested against COVID-19 vaccines with domestic terrorists, asking the government and social media companies to “strengthen censorship laws” against such groups and individuals.

“Echo chambers have skewed the reasonableness of risk assessment of some pro-mandate individuals, who now fear that unvaccinated people are ‘unsafe’—physically but also culturally—despite the scientific evidence.”

The report criticized scientists for calling unvaccinated individuals the source of future COVID-19 variants, thus fuelling inflammatory rhetoric against such people. In wealthy nations, universities have mandated boosters even for low-risk healthy students and faculty.

Some COVID-19 vaccination policies disproportionately restrict people’s access to public transport, education, work, and social life, something which the report says can amount to a violation of constitutional and human rights.

Vaccine mandates also violate public health ethics, the report suggested. The principle of proportionality requires that any public health intervention must generate benefits that outweigh the restriction of liberties and other burdens.

Additionally, the effectiveness of COVID-19 vaccine mandates in reducing transmission is likely smaller than expected, the research report said.

“These issues have been widely discussed in the public arena, raising the idea that many current vaccine policies are no longer being guided by the best science but are rather being used to punish individuals who remain unvaccinated and to shape public opinion and compliance.”

The report pointed to some U.S. universities and colleges mandating a third vaccine dose for boys despite the “lack of evidence for substantial clinical benefit.” On the contrary, there is evidence of a “small but significant” risk of myocarditis that compounds with each dose.

Many American states have taken steps to prevent the imposition of vaccine mandates and passports. In Georgia, Republican Governor Brian Kemp signed a bill in May that prohibited state and county agencies from asking for proof of COVID-19 vaccination.